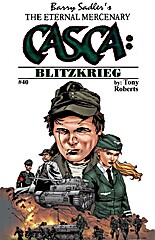 The Eternal Mercenary character created by the late Barry Sadler. Sadler wrote (or had ghostwritten) 22 novels between 1979 and 1990. The Sadler Estate created a new company to continue the series and in 1999 Paul Dengelegi continued the series with two books (1999 and 2001) and in 2006 yet another writer, Tony Roberts, was given the job to carry on and has so far (as of April 2012) written eleven novels with another one due out in August 2012.

More details about the character on www.casca.net