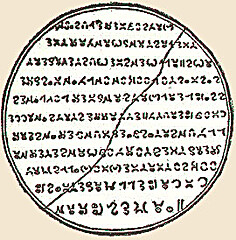 This group is named after the mnemonic the author produced to indicate the correct pronunciation of his surname: ‘Tell the rabble my name is Cabell.’ He first made his name (but not much money) as a writer of romantic but droll short stories and novels. He had an artistic breakthrough with the anti-romantic dream-romance The Cream of the Jest (1917), but it was not until Jurgen (1919) was tried for obscenity that he suffered an explosion of popularity and became one of the most lionized literary figures of the 1920s. This phenomenon culminated in the publication of his collected works in the 18-volume Storisende edition (1927-1930) in which he arranged his fantasies and his now-revised-to-fit earlier works into the ‘Biography of the Life of Manuel,’ Manuel being the leading character in Figures of Earth (1921) and the progenitor of many of Cabell’s male characters down through the fictional centuries. However, after about 1930 the Great Depression and creeping modernism led to a reaction against Cabell’s supposedly effete approach to literature; and although he continued to produce fiction and nonfiction of merit until his death in the 1950s he was almost forgotten as a literary figure.

In the 1960s he experienced somewhat of a revival in the wake of the great popularity of The Lord of the Rings, when the demand for something, anything, remotely like Tolkien caused obscure works of merit by Cabell, Dunsany, Peake, Eddison, Morris and other early fantasists to be reprinted (and several Cabell societies to be formed and scholarly journals published). But the rabble soon discovered these writers to be not very Hobbitish, and, the demand satisfied by eighth-rate Tolkien clones, Cabell receded again into the relative obscurity wherein now he bides and all we mourn for. Nonetheless, James Branch Cabell continues to find favor with the more enlightened fans of fantasy and esoteric literature, with collectors, and with lovers of his droll, highly polished manner. The eternal author stands, tongue in cheek, sword (ahem) in hand, awaiting our judgment.

UPDATE January 2013 -- Check out the new James Branch Cabell website-in-progress, The Silver Stallion at http://www.silverstallion.karkeeweb.com/cabellmain.html . It's an offshoot of discussions that started right here on The Rabble Discuss Cabell.