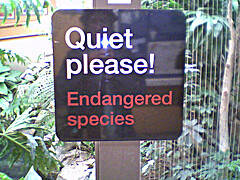 Aquest grup està oficialment inactiu. Són coses que passen. If you want to revive this group, or create a new group on the same topic, see this page.

This group was created to be Talk for those who don't talk much on LT now. This includes introverts, lurkers, those too busy to read threads with 150+ messages, and those who want to have conversations that aren't dominated by a few louder people. This group welcomes the sensitive as well as those who aren't sensitive but who have more rewarding things to do than deal with argumentative people. It also welcomes those whose English is not so great; no grammar police here!

This group is set up to be members-only to post but free for any to view. That said, this is intended to be a welcoming space, and a quieter space. Anyone can join, but please respect that part of the intent of the group is not to have so much Talk to keep up with. Long threads aren't as fun for many people who can't be on LT every day.

This group is also intended to be a more civil space. Behavior that might be acceptable on other LT groups is not here. There are ways to disagree without being disagreeable; use them!

The group was created to talk about how LT can serve quieter members better, but it doesn't have to be limited to that. No topic is off-topic. Live together in peace! :)

This is a feature balloon