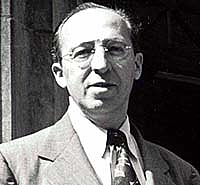 Quant a miFor four decades Aaron Copland(November 14, 1900 – December 2, 1990) was considered by many to be the defining American Composer. His blending of modern classical with folk and jazz music evoked the vast American landscape. Copland conducted many of his own works and was also an accomplished pianist. His compositions ranged from his modernist take on American and Mexican folk songs, ballets like "Rodeo" and "Appalachian Spring" (perhaps the quintessential Copland work), scores for films like "Of Mice and Men" and "Our Town", to symphonic works for the stage like his "Third Symphony" and vocal works including the popular "In the Beginning" or "Twelve Poems of Emily Dickinson" (regarded by some Copland scholars as his finest work).

From the 1960's onward Copland began conducting more and composing less. In his own words, "It was exactly as if someone had simply turned off a faucet." He was a self-taught conductor with an understated and unpretentious approach modeled off of other composer/conductors such as Stravinsky and Hindemith. Although he appeared to enjoy conducting he was critisized as having an "unsteady" beat and "unexciting" interpretations.

From early in his career, Copland had enjoyed teaching, lecturing, and writing about contemporary classical music. His writing works included three books, "What to Listen for in Music (1939)", "Our New Music (1941)", and "Music and Imagination" (1952).

Quant a
la meva bibliotecaFrom the Aaron Copland Collection processed by the Library of Congress "COPLAND LIBRARY, 1908-1988 The Copland Library series comprises selected books on a wide range of musical and general subjects from Copland's personal library. Most are signed, usually by the author, or contain annotations or information about Copland. The books reflect Copland's wide and varied interests and include those books written by Copland and translated into various languages. Many books concentrate on Copland's interest in French culture after his years of study in Paris."

The collection also contains 57 editions of Copland's three books - "What to Listen for in Music", "The New Music" and "Music and Imagination" - in 10 languages.