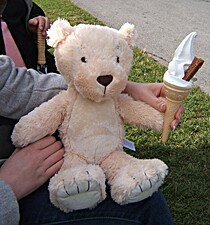 Quant a
la meva bibliotecaThis account is to catalogue comic books (for ease of reference only comics which have a single story running through them will be added here, so things like the dandy and the beano will be listed in another account). Manga are included in the main account as opposed to here, and some comics may have been added there by accident.

This library will be very small and very patchy. Small because I never really found a shop that sold comics until about three years ago (and I've been moneyless during those three years - what little money I've had has been syphoned off into books, as Alfirin shows ^_^). Patchy for two reasons:

a) the comics are all old and were probably only cheap because nobody had bought them for a decade or so, there were very few comics available so there won't be many complete stories here, and

b) the comics were only put out for sale when there was a random gap on the shelves that needed filling, so I bought them in clusters and that's how they've been secreted around the house (so little groups will be added as and when I find them again).