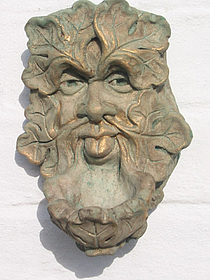 Quant a miI have enjoyed this bit of old Irish advice for many years. It expresses one ideal set of traits that I like.

"Not hard to tell", said Cormac.

I was a listener in woods
I was a gazer at stars
I was blind where secrets were concerned
I was silent in a wilderness
I was talkative among many
I was mild in the mead-hall
I was stern in battle
I was gentle towards allies
I was a physician of the sick
I was weak towards the feeble
I was strong towards the powerful
I was not close lest I should be burdensome
I was not arrogant though I was wise
I was not given to promising though I was strong
I was not venturesome though I was swift
I did not deride the old though I was young
I was not boastful though I was a good fighter
I would not speak about any one in his absence
I would not reproach, but I would praise
I would not ask, but I would give
For it is through these habits that the young become old and kingly warriors."

2008.July.28 - I am mostly working on adding more of my religion, history, psychology, archaeology, and fiction books into my catalogue.

Tags for books in my library are slowly improving. I have finished tagging around 1100, and the other 1700 are partially tagged. However, the majority of my collection mostly has placeholder tags to remind me to do it later... so browsing the collection by that method will not provide a lot of results. Searching by key words is more useful at the present time. (search button is at the top of the screen)

I have been helping out with translating LibraryThing into other languages. If you want to do the same, go here:
http://www.librarything.com/translations.php