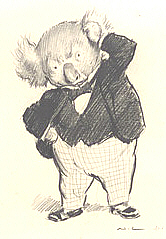 The tag 'irish' included Northern Ireland before 2007 movements and the tag 'british' English, Scots, and Welsh. I'm yet to encounter a writer from Douglas.

Quant a
la meva bibliotecaAll the books in this library are physical objects unless stated otherwise.

Many, including first-edition Black Sparrow Press Bukowskis and pretty much the complete works of Calvino, go walkabout when I leave for Tokyo in Septmber 1992. I try not to regret it and conserve what remains.

Though mine are 'quality' bookshelves they have no bezel-glass door insets, no rich smell of camphor or mahogany. Apart from the hybrid, which is made of any old thing found lying around, they're all made of pine and most are stained a light curry colour.

In December 2005 I drive north to get boxes of books from mum and dad's garage. They were stowed by my uncle -- who dies in February 2009 -- in a brown station wagon and taken up when I was overseas. They go in a unit made for the bathroom hall of my Sydney apartment.

There's a big two-column unit against the north wall of the apartment's study that I bought in September 2005 from an Italian with miles of ceramic tiles. In September 2006 a Hungarian installs a new shelf in it.

A fifth unit - in August 2006 - is made to fit in the south-east corner of the apartment's living room. Book-buying is addictive. Not just the text - antisocial, reckless - but the sensation of trimmed paper, the heft of pasted spines.

In September 2006 I take delivery of a sixth unit for the study's south wall - from a Central Coast workshop.

Books line a shelf in a sideboard sitting beneath the apartment's living-room window, and delivered in November 2007. The second-hand, hybrid bookcase I hand-stripped with a heat gun and chemicals after I bought it, in the late 80s, is placed, to make room, in the kitchen. This takes place in late 2008.

To make way for additional books, any books read go straight into polyethylene boxes which I start placing on the apartment's balcony in December 2008.

In August 2009 I relocate the entire library north to southeast Queensland, including bookcases. It is an expensive business getting these into the new apartment, which has three bedrooms one of which becomes the library.

In March 2010 I have a new bookcase made to fit in the atrium. It is pine, but is stained a lighter colour than the others.