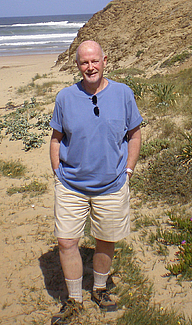 Quant a miBorn before the start of WW II in a small town in western New York state near the border with Canada. A great time and place to be a child and a teenager, except for a pair of unhappily marriedf working class parents nothing like those paragons in the 50's sitcoms "The Nelsons" or "Father Knows Best." For a small town of 5,000 it was blessed with an excellent school "system" (1 primary school, 1 jr./sr. high), and an advanced English program in the high school grades that was unusual enough for those years to draw interested educators from across the state to observe it. As the result of being the hometown of a family born into a huge American fortune, the village had a splendid public library building with a large and varied collection, and other projects of theirs in the village. And their impressive homes in town and large estates on the outskirts gave us a taste of having a "gentry."

I won a competitive scholarship and a supplementary merit one, and attended Syracuse University, which was a paradise - if a troubling one - of open enquiry, doubt, self-questioning, etc. Those last four years of the Fifties gave my world a good shaking up, but that had really already begun back in high school in the English enrichment program classes and borrowing from the adult section of the local library.

Perhaps somewhat unusual for a small town, early Fifties kid I had had a great deal of both heterosexual and homosexual experience, though the sense of conflict was profound. At the university my preference clearly veered to a gay sexual identity - a realization that within two years had separated me from my religion and other previous associations, and bought me the lifelong active animosity of my parents.

In June 1960 I stepped off a Greyhound bus at 34th Street in Manhattan with a new suit and $50 bucks in my pocket. I ended up in an apartment share in a rundown street in the Hispanic section that ran up the length of the Upper West Side in those years....I was totally overwhelmed and scared to death, but I had burned all my bridged behind me, however unwillingly.

Being gay in these years was definitely an underground life, both legally in some respects and certainly in the social sense. I was not a facile dissembler, so I settled into an unambitious work life, and over the succeeding decades worked at a half dozen or so, for the most part, boring, dead-end jobs (with one exception in the mid to late Sixties.)

On the other hand, it was patently clear to me by my late twenties that I was in New York to be in New York come the oft-cited hell or high water. I could not honestly throw the entire blame for the lack of a career on intimidation and discrimination. I loved the ethnic neighborhoods, the botanicas, restaurantes comidas criollas y chinas, the kerjillion book and and music stores, museums,etc., etc. and a seemingly endless parade of kooks and geniuses who began as workmates or sex partners and ended up as friends. In later decades I found the Gaelic Society, the Jung Institute, the Swedenborgian bookstore and similar off-beat interests, and - of course - in more open times, the bars, music, drugs, and clubs. The whole nine yards of life in Manhattan was mine for over three decades. And even the unexpectedly sobering experience when I was able to travel to Ireland for the first time, and met some of my relatives, living a subsistence farming life so pinched that it hardly differed from that of their parents in the 19th century.

And I had quickly adapted to that grimy, dangerous neighborhood where my NYC life began - it certainly beat the SRO I ended up in for a year, and I deeply regretted the onslaught of gentrification in the latter 70's.

In the Eighties and early Nineties, during the height of the AIDS epidemic and the wave of hate and fear that was whipped up conservative religious groups, I volunteered as a "crisis intervention worker." I was assigned to a series of nine men, and was the care partner for another three. All of these, but one, died during this time; and by the end of the decade all but two of my friends.

When I was ready to retire at the end of the Nineties, I wasn't happy with what the future seemed to promise politically, socially and economically for the U.S. -- the deeply negative handwriting was already plain on the wall for me, and the emergence of Bush, Jr. signaled to me that by 2020 the U.S. would have the "White House adorned by a downright moron" as predicted by H.L. Mencken. (OK, OK, I was four years off!) After being unable to come to a decision about where in the U.S. I wanted to live out my "Golden Years," one day I faced it, "You gotta be nuts to stay here that's why!..." and decided emigrating from the U.S. was the obvious answer.

I departed the U.S. with a one-way ticket in January 2000, and my residency permit.

I used to spend my days reading in my areas of personal interest, and re-reading old favorites, meditating, eating lunch in a seaside cafe, and meeting friends in a tiny hole-in-the wall cafe in the Old Town just inside the city walls...and found time for traveling as well. In recent years I found myself out-living my two best friends, both of whom were much younger, and my own health has declined. If my geographical and social boundaries have shrunk considerably, I am fortunate to live on the sea coast and a very short distance from the hill country, so that the natural world is a daily refreshment. And reading is a universe still.

Quant a
la meva bibliotecaAs a result of emigrating across the Atlantic my library has been considerably reduced; however, I have included books that I remember I used to own, but had to jettison. Many of the newer editions of classic novels are second purchases, part of a plan to reread books I enjoyed many decades ago to see what my feelings are about them now.