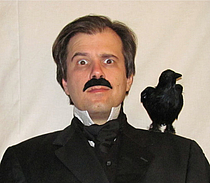 Where to start? I was born in Buenos Aires (Borges' hometown) on January 19th (Poe's birthday). The majority of my formative years were spent in Miami. I've lived briefly in the Seattle area and currently reside in Northern California. I've studied physics and economics in college and grad school. (And some German) My German is pretty rusty. My Spanish is pretty good, but I'm most comfortable in English. Anyway, that's it for basic biography.

I've always been a bit of a bookworm. When I was young, it was mostly science fiction (mainly H.G. Wells and Douglas Adams). When I got to high school, I got into cheesy AD&D novels, though I also liked some of the heavier works in my English classes. (The works that stand out from that time are The Sound and the Fury, Macbeth, Siddhartha, and Heart of Darkness.)

(True story: I was the only person in my 8th grade English class who liked Farenheit 451, and that includes the teacher.)

Ironically enough, I credit Lovecraft, whom I discovered the year after I graduated from college, with making me a more avid reader. From when I first read him, I was pretty hooked. First I read all his fiction. Then I started to read Lovecraft pastiches & other Cthulhu Mythos stuff. Then, having gotten bored with that, I got into other authors whose work bears some similarities, which brought me back to my roots through Cortazar and Borges.

Lately, I've become intrigued by HPLs influences and have been exploring 19th Century literature, which I found really dull when I was younger. I've also been trying to explore more contemporary horror outside the narrow Lovecraftian vein. And I've been trying to explore all that Latin American fiction that I've sort of neglected for years. Quant a
la meva bibliotecaA good portion of it is in storage do to a move that has left me without much space for the time being. The absence of books has inspired something of a binge of book buying, and I've discovered the joy of library book sales.

Anyway, there's a fair amount of Lovecraft and Cthulhu Mythos, back from when I was exploring that tradition. Also, anything by Thomas Ligotti that I can afford.

A good portion of it is stuff I've held onto for years, some of which I've inherited. (I have a certain hesitance to give up any book that has come into my hands, especially if I haven't read it.) There are some classics in there I keep meaning to read.

Anything tagged "borrowed" was at some point borrowed, either from the library or a friend, and so is not actually part of my collection. Tags starting with @ are author tags, so far mostly nationality.