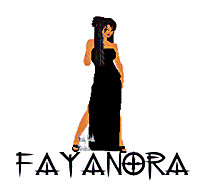 Quant a miHi, I'm Fayanora. I'm a Neo-Mythos Neo-Pagan. That means I'm Pagan, having read a great many texts and researched a lot of Earth Deities, and connected with none of them. (Well... not so true anymore.) My Goddess found me, and so I've started my own personal religion... and I don't care one way or another what you think about that. It's my path and works for me.

I'm also androgynous, transraced (meaning I'm one color but wish I was another. In my case, I'm white with freckles and I think I should be darker in color, like Hispanic or Polynesian color), bisexual, pangendered, polyamorous, eccentric, chaotic, weird, goofy, and yet deep and serious. I like philosophy and spirituality. I love the Conversations With God books by Neale Donald Walsch, and other similar books. I consider myself a Grey Pagan now because I am more balanced than I was as either a Dark Pagan or a Lightsider. My Patroness Goddess is Shao'Kehn, Goddess of Chaos, Instincts, and Life. Her Consort is Ahndahn, Goddess of Order and Fertility. They have an adopted Daughter named Nahtahdjaiz, who is the Child Goddess of Children. I also like Discordianism, The Flying Spaghetti Monster, The Church of the Subgenius, and similar things.

On the darker side, I read a lot of stuff by Anton LaVey, Christopher Hyatt, and others. One of my Faces, Lolita Leigh Smith, considers herself a Luciferian. Her website is http://fayanora.23ae.com/LLS/Lindex.html

I am a bundle of opposites in one person. I love both pop music and hard metal rock, as well as other music forms. I listen to violent music and watch violent tv shows but I'm a pacifist and blood makes me squeamish. I am terribly afraid of heights but I have dreams about flying, and being in an airplane didn't bother me much. I am a Disciple of a Chaos Goddess, but I am usually very orderly. In fact, Shao'Kehn told me that She is my Goddess because my nature is that of Order, and She balances me out. I can be single-minded and with infinite attention span at some things, and get bored within less than a minute on other things. I am fascinated by languages and have a lot of words in my own constructed language memorized, but I don't know much of any other language besides English. There are more where those came from, but I am tired of this topic now.

Another funny thing: on Yahoo Instant Messenger, my Avatar is of a dark girl (Hispanic or Asian) dressed in a kimono, pigtails, and a pink cowboy hat. :-) Silly, huh? But aside from the outfit, that's kind of what I feel like I should look. She's wearing a different outfit now, though.

Quant a
la meva bibliotecaAs with my path, my library is fairly eclectic. I have a bunch of books I haven't finished or even started yet. You should see my girlfriend's library, though, she's a bigger book geek than me!

A lot of my books are still with my parents in Iowa.