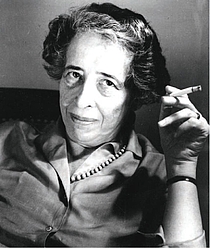 Real Name
Hannah Arendt
About My Library
LibraryThing member pranogajec initiated and supervised the cataloging of this collection.

The collection is cataloged from the Arendt library held at Bard College. The collection website is available at http://library.bard.edu/search~S0?/darendt+hannah+1906+1975+personal+library.

Tags, which are not yet complete, follow a modified Dewey system for simplicity's sake: Philosophy, Psychology, Religion, Sociology, Politics, Language, Science, Math, Education, Art, Literature, Literary criticism, History, Geography, Biography, Music, Economics, Periodical, Travel, and Bard Arendtiana (for items added by the Bard library and not part of Arendt's original library). In addition, books tagged annotated have marginalia that has been scanned to pdf and made available on Bard's website; you can find links to those pdfs in the comments field, or check out the complete list on Bard's website.
About Me
Hannah Arendt (1906-1975) was a philosopher and political theorist in the mid-20th century. Born to secular Jewish parents in Hannover, Germany, she fled to Paris in 1933 and moved to New York in 1941 (she returned to Germany briefly after World War II). Arendt's writing addressed key aspects of modern political and social life as well as the historical roots of the Western tradition. She taught in various capacities at a number of U.S. institutions, including Princeton, Chicago, Berkeley, and the New School. For her biography, see Hannah Arendt: For Love of the World, by Elisabeth Young-Bruehl. For her correspondence with Mary McCarthy, see Between Friends.

For more on her philosophy and biography, see also:
Why Arendt Matters, by Elisabeth Young-Bruehl
Hannah Arendt: The Recovery of the Public World, edited by Melvyn A. Hill
Hannah Arendt and the Meaning of Politics, edited by Craig Calhoun and John McGowan
The Political Thought of Hannah Arendt, by Margaret Canovan
Ubicació
New York, NY
Pàgina d'inici
http://memory.loc.gov/ammem/arendthtml/arendthome.html