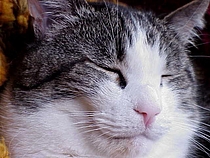 It's been quite some time since I wrote anything here.... and just about as long since I've added any new books to my library list. Needless to say, I haven't stopped collecting books. As a matter of fact, my Lovely Spouse and I celebrated 20 years of marriage by spending 4 days at Powell's City of Books. Other than emerging for lunch at some nearby food carts we spent all of those 4 days going through the stacks. Our one rule was: "Buy anything you want." We were overjoyed when we learned that Powell's will ship "up to 1,000 books" to any location you desire for $13. That's right... Thirteen Bucks for 1,000 books or less! Well, we didn't actually count how many books we bought and had sent home to Seattle (I can't begin to tell you how happy we were not to have to haul all those books back on the train!) but a few days later 5 big boxes full of books arrived at our door. The UPS guy was *not* amused.

So now I begin entering my haul... and do some catch-up on some of the other stuff that's been sitting around. Hope I can find most of it.

Generally I do not confuse my self with my animals. That said The photograph on this page is the real Hoagy. He died recently of kidney disease. He was in his twenties when he died. Before coming into our lives, he was known as Ziggy and lived the first few years of his life with a Navy family on a base near here. He was renamed for the piano player and singer of note, but never really liked music, with the possible exception of the Piano Quintet in A major by Franz Schubert. He was particularly fond of books and movies because they caused my lap to be unmoving for hours. Unlike myself, Hoagy was a big fan of John Ford movies. It is only due to his insistence that I learned to understand and enjoy "The Searchers" and other movies with John Wayne. As Hoagy would have said, "A cat's gotta do what a cat's gotta do, meyowf!" I miss him.

Influences - these are books that have influenced me more than a little in my life & thoughts. They may not be Great Books but they got under my skin and thrived. One of them (Merriam-Webster) defines "influence" in part as:

1 a : an ethereal fluid thought to flow from the stars and to affect the actions of men
4 a : the act, process, or power of producing an effect without apparent exertion of tangible force or direct exercise of command and often without deliberate effort or intent [primitive men thinking that almost everything is significant and can exert influence of some sort -- William James]
4 c : the exertion of force at a distance [tides are caused by the influence of the moon and sun]
5 : the power or capacity of causing an effect in indirect or intangible [the intoxicating influence of the mountain air -- W.S.Gilbert]
- under the influence: in an intoxicated condition

Deep 6 - Books that I intend to stuff in a gunny sack and drop off a very high bridge ASAP.

Aside from these the tags are pretty straight forward.

This list contains only what I have now. My current library was built on the ruins of a collection it took me a lifetime (well, the first part of a lifetime anyway) to build. That library rivaled the one at ancient Alexandria… well… perhaps not… but it was rather large. That library was decimated by a divorce, several years of living in what a friend once referred to as “a cool bachelor pad,” a new marriage and a move into an “intimate” (Real Estate jargon) condo. Truckloads of books went to resale stores and other places I now shudder to think about. Many moves later, when we finally bought a home of our own and had people over for the housewarming, everyone was in awe of my library except for one old friend who knew me and my library in my previous life. He took one look at it and quipped: “So is that ALL you have left of your library?” The jaws of the other spectators dropped even further. Here on LibraryThing, with book loving peers, my library is neither the largest nor the most spectacular.

I’ve been reading books for as long as I can remember. The earliest movies my loving father made of me show me rubbing a bowl of chocolate pudding all over my head while reading a copy of The Story of Babar, The Little Elephant. (Ok… so the book was not in the frame of the shot. I’m telling you it was there!) I cannot begin to imagine not reading. I'm usually reading two books at a time one casually and one as a study. The Fagles translation of the Odyssey is an example of what I mean by "a study". While I was involved with it I read several studies of Homer, as well as other background materials. I began by reading the book and then listening to the corresponding parts of the performance (it's so much more than a simple reading!) on the CD but soon switched to just the performance version. A very different experience!) When I finished the CDs I read the whole book again. Meanwhile my recreational reading was probably a Hornblower or Flashman book… I don’t exactly remember.

Books are wonderful to have and to hold as well as to read. I used to have several old German books not because I can read German but because that old Black Letter type was so beautiful! Books also make great insulation against sound and cold. But I read more than books. All my daily newspaper and magazine reading is now done on line and I don’t mind reading on my Android (formerly iPaq). For some books digital is an absolute necessity: Edgar Rice Burroughs for example. I wouldn’t be caught dead reading anything with a cover as lurid and smarmy as most of his. Besides, all his stuff is in the public domain and widely available for free download. I’ve even written a little macro that will convert Project Gutenberg vanilla files to Microsoft Reader files with a single click. Come to think of it, I have dozens of e-books… (see below).

I spoke too soon. I've been trying out various ebook reading software on my Palm. Not bad at all! So I've downloaded a couple books including the one I'm reading now Battle Cry of Freedom: The Civil War Era by James M. McPherson and my favorite SF anthology The Hard SF Renaissance. Both are rather large books, and as much as I appreciate a Massive Tome, I also like having both of these with me and in hand. I'm giving the Civil War book a deep reading, so it is useful to have the e-version for making notes, following up details on the web and the like. (I HATE marking up a real book!) The Hard SF Renaissance is good to have around for reading in those spare moments here and there. In addition, I've just discovered Plucker and am now busy loading many of the Project Gutenberg titles I had on my iPaq. It is very fine not to have to convert all those vanilla text files by hand! Ah, the wonders of the 21st Century!

Since I no longer have a working iPaq I have removed my list of e-books from this space. I never read many books on my laptop or desktop computers. I now use a smart-phone very similar to my old Pocket PC but, while I do read magazine articles and newspapers on it, I have no plans to load any books.

I find it odd that, while I have reduced the size of my library in the past due to moving to much smaller quarters, this will be the first time the loss is due to no longer having the technology to read them. This seems to violate my perception that the contents of books should be free to all who can read. In a way it seems like one of those not so savory directions in which the future is heading that I will be happy not to be a part of.

I am thrilled to say that I just discovered two boxes of maps in the attic that I thought had been lost! This cache is very exciting because it contains a good deal of service station road maps that I collected on location across the US & Canada during the late 1950s and early 1960s! Also included are more vintage road maps that I collected from resale stores in subsequent years that include many vintage road maps from Europe, travel and geographical maps from all over the world, and a huge stack of well preserved USGS maps including complete 7.5-minute, 1:24,000-scale quadrangle series maps for at least a couple of states! There's also some assorted other stuff deep down in the dusty boxes.

I consider maps to be a valid part of my library and will ultimately list them here. Only a few of these maps have ISBN numbers or are otherwise entitled to inclusion in my detailed list. I'll see if I can get around to listing the others as I have done the e-books and most of the comic books, outside of the LT database but listed here so I can know what I have.

Books I no longer have:

- Balzac’s “La Comedie Humanie” in 30 leather-bound volumes
- Likewise Scott’s “Waverly Novels”
- World Book encyclopedia from the early 1960s with yearbooks going back through the 1950s
- Two sets of Encyclopedia Britannica, one from the 1960s and the famed 1911 edition now in the public domain and available on line
- Several Time/Life collections: Old West, WWII, Planets, etc.
- A huge, weather-beaten, Merriam-Webster’s unabridged dictionary
- The complete Ian Fleming James Bond paperback series
- Far too many of the Bantam Books Doc Savage reprints
- A set of the unauthorized ACE paperback version of Lord of the Rings, also a hardcover (authorized) edition
- Mervyn Peake's Gormenghast trilogy
- And tons of other titles including much poetry, novels, picture books, foreign language, and what is now called “genre fiction” such as SF, horror, fantasy, crime, historical, spy, etc.

Like e-books most of my comic books do not have ISBNs. I’ve entered the ones that do. Unfortunately, my mom burned all my comic books one day when I was at school. Her idea was that I was now old enough to be reading something other than comics. She also would not allow me to read “bad” comics. All super heroes were verboten as were anything other than Dell (“Dell comics are good comics”), Mad Magazine and Classics Illustrated. This was not a problem as far as I was concerned since my pals had all the Superman, Batman, Plastic Man (a favorite of mine) as well as Dennis the Menace (one pal had a huge crush on Dennis’ mom), Archie, Casper, what have you. I was particularly fond of Chip n’ Dale (I identified with Chip), Little Lulu (Tubby also had red hair), Turok, Son of Stone (the dinosaurs!) and, above all the Disney Ducks drawn by “The Good Artist,” Carl Barks (of course I did not know his name then). My current collection consists of mostly reprints that I have purchased since the conflagration as well as a few that were stashed in locations my mom did not know about the day she torched the rest! Below is a list of the current collection showing country of origin, title and issue number. Many thanks to the folks at COA and the I.N.D.U.C.K.S. database for making the job of cataloguing my comics as easy as using LibraryThing to catalogue my books.