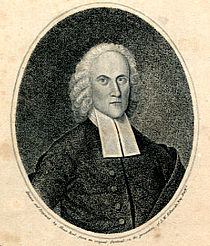 Quant a miJonathan Edwards (5 October 1703 - 22 March 1758), American theologian and philosopher of British American Puritanism, was the stimulator of the religious revival known as the "Great Awakening," and one of the forerunners of the age of Protestant missionary expansion in the 19th century.

Born in Connecticut, Edwards graduated from Yale College in 1720 and went on to study theology. He preached in New York City briefly before returning to Yale as a tutor until 1726. Edwards was ordained as a minister in 1727 and assisted his maternal grandfather, Solomon Stoddard, at the latter's church in Northampton, MA. Upon Stoddard's death in 1729, Edwards became the church's pastor, and from the pulpit influenced and observed the events of the Great Awakening.

In the late 1740s tensions grew between Edwards and his congregation, and in 1750 Edwards moved his family to Stockbridge, MA, where he became a leading missionary to the Housantonic people. It was during his time at Stockbridge that Edwards wrote many of his well-known theological treatises, including essays on original sin, the will, and virtue.

In 1757 Edwards was called to New Jersey, where be became the third president of the College of New Jersey (now Princeton University). He was officially made president on 16 February 1758, but died just a month later of a smallpox inoculation.

Edwards married Sarah Pierpont in 1727, and the pair had eleven children. One of those, another Jonathan, followed his father as a leading minister and college president (of Union College in Schenectady, NY).

Quant a
la meva bibliotecaEdwards read widely over the course of his life, carefully documenting books he wished to acquire and books he loaned to friends and family members. These documents have recently been published in The Works of Jonathan Edwards: Volume 26 (Catalogues of Books), ed. Peter J. Thuesen. Yale University Press, 2008.

Those volumes included here thus far are from the collections of Firestone Library at Princeton University, Yale University, several other institutions, and a private collection. More volumes will be added as they are located.

Books which also belonged to Edwards descendants are cataloged in the Edwards Family collection.