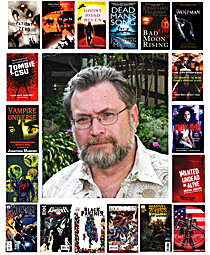 Real Name
Jonathan Maberry
About Me
JONATHAN MABERRY is a New York Times best-selling and multiple Bram Stoker Award-winning horror and thriller author, magazine feature writer, playwright, content creator and writing teacher/lecturer. His books have been sold to more than a dozen countries.

Jonathan was an expert on the History Channel documentary on zombies scheduled to air October 26.

His nonfiction works include: VAMPIRE UNIVERSE (Citadel Press, 2006), THE CRYPTOPEDIA (Citadel, 2007 –winner of the Bram Stoker Award for Outstanding Achievement in Nonfiction; co-authored by David F. Kramer), ZOMBIE CSU: The Forensics of the Living Dead (Winner of the Hinzman and Black Quill Awards and nominated for a Stoker Award; 2008), THEY BITE! (2009 co-authored by David F. Kramer), WANTED UNDEAD OR ALIVE (2010; Bram Stoker nominee; co-authored by Janice Gable Bashman), and THE VAMPIRE SLAYERS FIELD GUIDE TO THE UNDEAD (2001, written under the pen name of Shane MacDougall).

He writes a variety of projects for Marvel Comics involving CAPTAIN AMERICA, BLACK PANTHER, DOOMWAR, WOLVERINE, DEADPOOL, THE X-MEN, FANTASTIC FOUR, the NY Times bestselling MARVEL ZOMBIES RETURN, MARVEL UNIVERSE vs THE PUNISHER and MARVEL UNIVERSE vs WOLVERINE. All of Jonathan’s comic book collections are released as Graphic Novel collections within a month or two of individual comic publication.

Recent short stories include “Pegleg and Paddy Save the World” (HISTORY IS DEAD, Permuted Press 2007), “Doctor Nine” (KILLERS, Swimming Kangaroo Press, 2008; and reprinted in THE STORIES (in) BETWEEN Edited by Greg Schauer, Jeanne B. Benzel, and W.H. Horner. Fantasist Enterprises, 2009), “Sherlock Holmes and the Adventure of the Greenbrier Ghost” (LEGENDS OF THE MOUNTAIN STATE 2, Bloodletting Books, 2008), “Clean Sweeps” (AND SO IT BEGINS, Dark Quest Books, 2008), “Family Business” (THE NEW DEAD, St. Martin’s Press, 2010), “Like Part of the Family” (NEW BLOOD edited by Patrick Thomas and Diane Raetz, Padwolf Press, 2010), “Zero Tolerance” (THE LIVING DEAD 2, Night Shade Books), “Flint and Steel” (GI JOE: COBRA WARS, 2011), “Saint John”(THE MONSTER’S CORNER, 2011, St. Martin’s), “The Death Song of Dwar Guntha” (Under the Moons of Mars: New Adventures on Barsoom, 2012, Simon & Schuster), and “The Wind Through the Fence” (an original e-story available for all e-readers). His essay, “Take Me To Your Leader” will be included in the nonfiction book, TRIUMPH OF THE LIVING DEAD: Robert Kirkman's Zombie Epic on Page and Screen edited by James Lowder (BenBella Books/Smart Pop, 2011).

All of Jonathan’s novels are available on audio, including the audio-only collection, JOE LEDGER: THE MISSING FILES (Blackstone), which includes the short stories “Countdown”, “Zero Tolerance”, “Deep Dark”, “Material Witness” and “Dog Days”.

He is the creator of the ‘Vampire Wars’ shared-world story cycle, and is currently editing an anthology called ‘V-WARS’ for IDW, scheduled for release in late 2012.

Jonathan is the co-creator (with Laura Schrock) of ON THE SLAB, an entertainment news show in development by Stage 9 for ABC Disney / Stage 9. He was also a ‘blog correspondent’ on Sony’s zombie-themed web show ‘WOKE UP DEAD’; and a recurring character on Laura Schrock’s ‘IT’S TODD’S SHOW’.

Jonathan has sold more than 1,200 feature articles and 3,000 columns; as well as greeting cards, song lyrics, poetry, technical manuals, call-floor scripts, and two plays, including Tales from the Fire Zone. He is developing an urban fantasy novel based on that play.

Jonathan is a Contributing Editor for The Big Thrill (the newsletter of the International Thriller Writers), and is a member of SFWA, IAMTW, MWA, SCBWI, SFWA and HWA.

Jonathan was the Executive Director of the Writers Room of Bucks County (2005-06) and co-owner of the Writers Corner USA (2006-2009). Jonathan regularly visits local middle schools, high schools and colleges to talk about books, reading, publishing and the writing life.

On the last Sunday of every month Jonathan hosts the Writers Coffeehouse, a free three-hour open-agenda networking and discussion session for writers of all genres and levels of skill. The event is held at the Barnes & Noble in Willow Grove Pennsylvania.

Jonathan has been a popular writing teacher and career counselor for writers for the last two decades. He teaches a highly regard series of classes and workshops including Write Your Novel in Nine Months, Act Like a Writer, Revise & Sell, Experimental Writing for Teens, and others. Many of his students have gone on to obtain representation and/or publish in short and novel-length fiction, magazine feature writing, nonfiction books, TV, film, and comics.

In 2004 Jonathan was inducted into the International Martial Arts Hall of Fame largely because of his extensive writings in that field.

Jonathan lives in Bucks County, Pennsylvania, with his wife, Sara Jo, to whom he dedicates all of his published works.

JonathanMaberry ha afegit:
Judo and you : a handbook for the serious student de John Earl Maberry