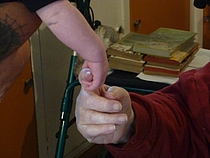 Quant a miFour and a half decades of Adventures, including books, motorbikes, babies, schools, libraries, museums, bush work, home building .... did I mention reading??? Oh, and a wee bit of writing (haven't pushed anything onto publishing establishments yet - give me time!) Started this catalogue to help organise my late Mum's collection, July 2013.

Quant a
la meva bibliotecaInitially organised into boxes. This is so Mum's house can be repaired after the Christchurch New Zealand earthquakes. The boxes are to be stored at a secret location (kidding) - with family for safe keeping, until I/we can move the books back to the family home and onto shelves. Mum's obituary follows:

Mavis was a wonderful woman. Wife of Bernie and mother of Edward, Michael, Martin, James and Suzanne, she was first of all a family woman, devoted to her children, grandchildren and great-grandchildren. Her house in North Brighton was the centre of family life.

She was also a great reader. And she was very bright. She had been dux of her secondary school and had even begun medical studies at Otago University in her younger days. After her children had grown up, she returned to university and got an arts degree from Canterbury University.

Her interest in history and languages, combined with her curiosity about her own family, led her to research her family history. But, as she read more and more, she would find out all about other families that lived alongside hers and about the life of the communities where they lived. She became incredibly knowledgeable about Banks Peninsula history.

When Gordon Ogilvie wrote his Banks Peninsula. Cradle of Canterbury, he acknowledged his debt to her: “Mavis Donnelly-Crequer, descended from an early French settler and with a minutely detailed knowledge of Akaroa’s first two decades, has given me much skilled assistance not only in the Akaroa chapters but in her checking of the entire manuscript.”

Michael O’Meeghan was similarly grateful for her assistance with his histories of the Catholic Church in the Canterbury region.

And I wrote in my French Akaroa: “Special thanks go to Mavis Donnelly-Crequer, a descendant of Charles Lemonnier. She has spent many, many hours working methodically through old newspapers, church registers, land records and American whaling logs. Her great knowledge of Akaroa family histories has been a real boon. She is always most generous to the many people who have asked her for assistance. She checked through my text for the first edition, eliminating embarrassing errors of detail, as well as sharing the fruits of her own research.”

Unfortunately, Mavis’s poor health did not allow her to check the text for the second edition of my book, but she did come up with a couple of errors after it was published. Mavis is always right: I had got the names of the Malmanche brothers in the wrong order in a photo caption, and a Libeau family photo was taken in 1906, the year before their Diamond Wedding Anniversary.

This is the sort of knowledge that Mavis had in her head. She herself wrote a translation (from Latin) of the first register of baptisms, confirmations, marriages and burials of the Catholic church at Akaroa, that covers the years 1840 to 1846. It includes details of the baptisms of many Maori living on Banks Peninsula at that time, including Wiripo Wakarukeruke, Tiemi Nohomutu, Petera Kautuanui, Warehiko Kuare, Pauro Taki and Aperahama Te Aika. And it is carefully annotated and indexed.

She also transcribed and translated (from French) another document from the Christchurch Catholic Diocesan Archives: Father Séon’s travelling notebook, Banks Peninsula and Christchurch, 1858-1859. Her careful, balanced attention to detail is seen in her footnotes.

These are very interesting typed documents that can be found in local libraries.

Mavis adapted to computer technology and wrote up nearly a hundred genealogies of various Banks Peninsula families, from Armstrong to Zillwood, carefully indicating her sources. I hope these will be made available to the general public, perhaps through the Akaroa Museum, along with items like her very interesting little essay on the problem of working out who was buried in Akaroa’s old French cemetery. It begins, “No-one knows who or how many were buried in the first cemetery; here are some names.” And it goes on to say such things as:

“Pierre Le Buffe's grave-marker was found about six inches down (not deep enough for a coffin plate) in the laying of the Monument foundation, in May 1926, too late for his name to be put on the stone. 9bre in the inscription le 8 9bre 1842 was taken to mean the 9th month, but is really the abbreviation of novembre. Later in the year at the time of the unveiling, the Akaroa Mail misprinted the year as 1849, the Press repeated it, and it is still seen from time to time.”

Mavis herself was the descendant of Charles François Lemonnier (1813-1898) and Mary Ann Foody (c1832-1907), whose daughter Bonnette Suzanne married John James Walker in Akaroa in 1880. She was also the grandchild of another Frenchman, Joseph Marie Créquer (1859-1947) and another Irish woman, Annie Clyde McDavitt (1862-1932), who married in Dunedin in 1882 before coming to live in Christchurch.

Her combination of kindness and extraordinary knowledge made her someone very special.