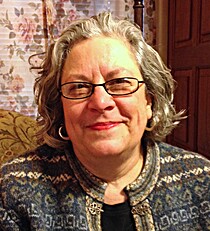 About Me
Marie C. Collins lives in Lambertville, New Jersey, with her two dogs, George Eliot and Henry James, who — in spite of their snoring and a tendency to sniff horrifying things — are very good company (and in return, willingly endure Marie’s insistence that they love being kissed on their snouts).

Marie holds a bachelor’s degree in English and Journalism from Douglas College at Rutgers University and a master’s degree in English Literature from Temple University. She has held sundry jobs throughout her life, like caregiver, cook, waitress, newspaper reporter, and even a brief, misguided stint as a ballroom dance teacher. However, for most of her adult life she has written for hire, usually on topics related to education, as writing is the thing she likes to do best.

Marie has a daughter she adores, Laurel Pellegrino, who is a doctor in Seattle.

Throughout Marie’s life, she has at times felt like an alien — mostly because she was extremely shy and didn’t react to things the way other people did. When she decided it was time to try to write a novel, she found herself wondering what it would be like to actually be an alien — then it struck her that that might be a good place to start. But since she’s also intrigued by the way cultures blend to make each of us feel a bit “different,” she decided her aliens should be half Earth human as well.

Marie is currently writing the second book in her Secrets of Farbookonia series: The Quest for Normal. Her goal is to publish it at the end of 2015.