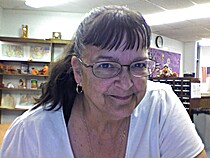 Quant a miI've been a bibliophile since the womb. My mama was a school librarian/media specialist when I was a kid, and I followed in her footsteps for over 35 years. I retired in the spring of 2008.

My husband Lee and I were both teachers. We came to the Sandhills of Nebraska in 1983. It's a great place to teach, a great place to raise kids and cattle. (Our area has far more of the latter than the former.) Lee and I raised a terrific daughter, Mary Leigh, who turned into a great advertisement for growing up in the 'Hills. She in turn found a 6'5" football player at college, married him, and presented us with THE 3 most beautiful, most intelligent grandchildren on the planet. Hannah is nearly 16 and loves books. She likes many of the same books her mother enjoys as well as books Gramma had as a kid. Christian is nearly 13, and loves nonfiction - especially if they have the Minnesota Vikings in them! He reads everything in sight. He also likes to create his own books. Miss Hayden is 9. She loves her books, and is reading way above her grade level. Actually, all three of them are. I asked Hayden once why she was crying and what I could do to help. She sniffled at me and said, "Well, you could read me happy."

After 35 years in my beloved Sandhills, I finally faced reality and relocated to where my grandchildren are. (Five hours trip one way every time they did something wonderful was too far as I get older.) I'm just across the river from Nebraska, and I get back to home as often as I can.

I lost my Lee to cancer in 2005.. Some days are good, some not so good. Books and grandchildren are my delight and my salvation.

Quant a
la meva bibliotecaMy Library (Your Library in Collections) is still the record of what I own. Since the advent of Collections, I do have some WishList and some Read But Not Owned on board, but I opted not to count them them in YL. I LOVE Collections, and I'm still dinking with them.

I love reconnecting with books I read as a kid, and I'm always watching for old familiar titles. I can recommend Loganberry Books as a great source for out of print children's and YA books. They are really helpful and available online.

I also have a lot of "vintage" books because I inherit them. I couldn't bear to see my grandmother's teaching materials and novels go to the trash so I rescued them. Some of them are really great reads!! I also have lots of school books and novels that belonged to my parents and grandparents. I love the smell and feel of them.