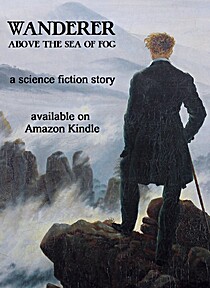 Quant a miI am the author of Wanderer Above the Sea of Fog, a science fiction novelette available on Kindle. The blurb is here:

"He had the realisation that all have late in life; that armour does not work, after a lifetime spent forging it..."

He is the Galilean, a living legend: a man with nano-technology flowing in his blood. It means he does not even have to wear a spacesuit as he roams the alien moons of Jupiter.

They are his charges: a group of slush miners who have contracted him to guide them across the salt ice of Europa moon. But none of them can begin to perceive the turmoil taking place in that man's soul...

Inspired by the famous Caspar David Friedrich painting of the same name, 'Wanderer Above the Sea of Fog' is a compelling 12,000–word novelette about the spacefaring future of our species and the enduring rifts in the human condition.

The link to the above novelette can be found here.

Quant a
la meva bibliotecaI have been writing book reviews on LibraryThing since 2016 and reviews in general since 2012.

I tend to review everything I read on the same day I finish reading them. Some of my reviews were written when I was younger and I do not necessarily hold the same opinions today. I would prefer they stand as my views at the time rather than revise them.

Due to the problems I had uploading my data to LibraryThing in 2016, some of the reviews are described as being written in 2016 or 2017 when they were actually from much earlier. The true dates the books were reviewed correspond to the date I read them.