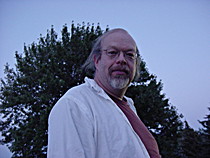 Quant a miI am a 50-something bookaholic. I manage the largest used book store in Eastern Idaho. In addition, I play jazz piano in my own quartet--called Syzygy--and in the local big band--known as the JazzHouse. I write and arrange most of my quartet's music. I also play classical piano and I'm preparing for a series of recitals in early 2009. I teach intermediate to advanced-level pianists, as well as courageous adults.
I have college degrees in music, political and legal theory, and law. In addition to English, I speak, read and write fluent Spanish, and have a working reading knowledge of French, Italian, medieval Latin and Koine Greek. My oldest son married a Japanese girl, and I've tried Japanese as well, but the brain may be too ossified.
I have five children, four males and one awesome young lady. We males are a rather vocal, well-informed and opinionated group of soccer fanatics, and know far too many of the English soccer fight/drinking songs than is healthy for us. American soccer pales by comparison, and the songs aren't much better

Quant a
la meva bibliotecaMy library grew from my university training, and consisted originally of books my wife and I had read and acquired during our undergraduate and graduate careers. Gradually I expanded my holdings to include LDS Church History (yes, we're both Mormons, my wife is the more active of the two); New Testament history, languages, commentaries, and theology; Old Testament history and commentaries. Recently I've become interested in Eastern Christianity and have expanded my holdings concerning the Eastern Orthodox Churches, Orthodox spirituality and monasticism, Byzantine history, and Orthodox theology.
Because I did my master's thesis on the roots of medieval canon law in Hugo Grotius's "De Jure Belli ac Pacis" ("On the Law of War and Peace," the seminal treatise on public international law), I have a lot of books on all aspects of public and private law. I also have books on Latin and Greek themselves. My secular histories go back as far as the Sumerians and Akkadians, and slowly work forward, although my holdings are weak in 17th-21st century Europe.
I have many books dealing with all aspects of music, particularly classical composers for piano, and technical discussions of the "correct" ways to play piano for maximum effect with minimal injury to hands and especially tendons. These books are getting the most use of late.
I have between 2,500 and 2,800 books on all aspects of medieval life: marriage, child-rearing and families, medicine (or the lack thereof), feudalism, the unique role occupied by the Catholic Church, magic, witchcraft and sorcery in the Middle Ages (especially including Jewish mysticism in the Kabbalah, the Zohar, and similar trends and ideas), the Crusades and their aftermaths, the Protestant reformation, the Counter-Reformation and the Thirty-Years War, culminating in a type of religious freedom with the Peace of Westphalia (about which I wrote my senior honors thesis at U of Utah).
For fun, I read in fiction: Patricia McKillip, John LeCarre, Susanna Clarke's wonderful book "Jonathan Strange and Mr. Norrell" (I cannot praise this great book sufficiently), my once-a-year trek through Middle Earth with Tolkein as my guide, A.S. Byatt ("Possession" is a great novel. Period.), Umberto Eco, my first guide to all things medieval in "The Name of the Rose," Arturo Perez-Reverte, a literate Spaniard whose intellectual thrillers leave his American competitors (Dan Brown in particular!!!) in the dust--"The Seville Communion" and "The Club Dumas" are my favorites and get re-read every other year or so, and Rafi Zabor, whose wonderfully witty and literate book
"The Bear Comes Home" a delightful tale of a post-Coltrane sax-playing muzzy brown bear is the most refreshing piece of jazz-related fiction I've found in years. And remember, I'm a jazzer myself.
For non-fiction, I lose myself in anything to do with medieval law. It's unnaturally alluring, and I don't know why, I just know I love it. I also love books on theology, particularly those dealing with mysticism and monasticism, books that make philosophy available to the non-specialist, and those books we find in the "New Age" section that promise an initiation into hidden and arcane knowledge reserved for the few, a la the 16th-century Rosicrucians and Illuminati. Haven't found any of that, though.
My collection fills the basement of my house, and is gradually creeping upstairs into other parts of the house, sort of like a literate Kudzu. I have about 7,500 volumes, almost all of them hardback, probably 95% of them non-fiction.