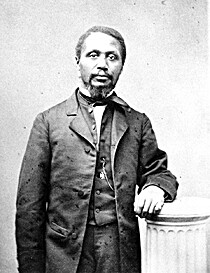 Quant a
la meva bibliotecaAside from Frederick Douglass's library at Cedar Hill, the library of Robert Morris is the only known extant, antebellum, African American-owned libraries. Morris's library consists of at least eighty-three titles, including two unique pamphlet compilations, which reveal his intellectual commitment to full citizenship, equality, and participation for people of color. Sometime around Morris's death and likely also after his wife Catharine's death in 1895, books in the Morris library came to Boston College. At the time, Boston College and Boston College High School (now separate) were one and the same, along with the Church of the Immaculate Conception (the residuary beneficiary of Catharine's will). The books remained at Boston College High School until the secondary school and college split in 1913. At that point, the Morris books-at least most of them-moved to the new Boston College campus in Chestnut Hill.

Over a century after Robert Morris's death, two librarians at Boston College High School, Tia Esposito and Anna Martinez Stephens, were trying to determine why Morris was known as "the Irish Lawyer." After discovering that he had a connection to Boston College, they searched the BC Libraries catalog and found the name in multiple library records. Esposito and Stephens ultimately were able to identify this Robert Morris as the owner and immediately understood the significance of this library. By that time, his books had been moved from BC High to the John J. Burns Library at Boston College. Due to this vital work, the books have been connected to Robert Morris as a former owner in the catalog and pulled together with the local collection name Morris.

It is likely that these books represent the extant section of a larger original library. Indeed, although Morris’s will bequeathed his “Law Books” to his son, Robert Morris Jr., the surviving collection does not include any books for a legal practice. No inventory accompanied his will, and he does not appear to have kept a separate list. Some of Morris’s books may have been discarded, or they may remain intermingled with Boston College’s other library collections. It is very likely that more of Morris's books remain unidentified in library collections at Boston College High School, Boston College, and beyond. His papers are held by the Boston Athenaeum and the Canton Historical Society.