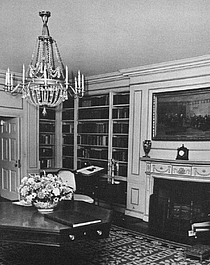 Quant a
la meva bibliotecaThis library was selected for the White House in the early 1960s by Yale librarian emeritus James T. Babb, at the request of First Lady Jacqueline Kennedy. In his foreword to the published catalog of the library (used to create this LT collection), Babb wrote that the library was "intended to contain books which best represent the history and culture of the United States, works most essential for an understanding of our national experience."

Babb noted the criteria used in the selection of the books for this library: "The collection had to be strictly limited because the attractive library on the ground floor of the White House has shelf space for only twenty-five hundred volumes. Authors, with a few exceptions, are citizens of the United States; fiction and poetry by deceased writers only have been included." He noted that 70% of the books included were gifts from "individuals from all over the country, university presses, commercial publishers, the American Booksellers' Association, and foundations; the remainder were purchased with funds given to the White House Historical Association by generous donors."

Along with Babb, others involved in the selection of this library included Lyman H. Butterfield, Julian P. Boyd, and Arthur M. Schlesinger, Jr.

The library was added to after its initial installation (indeed, some of the books included in the 1967 short-title list were published after the original library was put together in 1963).