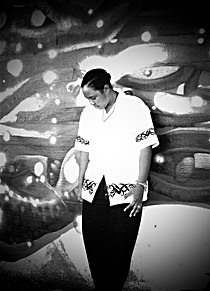 Quant a miAzaan has connected with immeasurable fans, friends, colleagues and community partners with a diverse mix of charm, intellect, creativity and spirituality. In The midst of all of that, Azaan remains approachable, modest and quite grounded to the people and things that matter. Azaan's optimistic attitude has set her on a path for empowerment of for all people and creeds.

While trying to navigate her personal life, her demanding and exciting career, Azaan is quite focused on uplifting and empowering others through poetry, publishing, photography, screen writing and even broadcast media. "I believe through education, knowledge, and acceptance there is no force that can oppress us" "Everyday my goal is to use myself to help someone, anyone get to the next level of their artistry, their company or even their life"!

Azaan built Glover Lane Press by hand, one exhausting brick at a time back in the year 2000. To this day, Azaan & Glover Lane Press have published and designed numerous books on various topics, which include eBooks! In addition to Azaan's publishing career, Azaan is a journalist, poet, photographer and print media designer that has won several awards!

Azaan's passion for writing poetry began in the early 1980's! Since then, Azaan has been published in countless publications, and has written numerous volumes of poetry that shock, awe and inspire! After falling in love with journalism, her goal is to give voice to people and topics that have been muted or swept under the rug or even ignored by mainstream society. Azaan's work and commitment has given her a distinguished literary reputation.

People also recognize Azaan as one of the prized Outfest Photographers and also an artist and photographer in the esteemed Getty Underground global art exhibition. For many years, Azaan's aesthetic eye captivated the Getty Underground audiences at the prestigious Getty Museum in Los Angeles, California.

Azaan's photographic images have been included in magazines, newspapers, calendars, brochures, postcards, business cards, greeting cards, and even in a few hotels around the country.

This award-winning multi-media talent is also known as the former editor of GBF Magazine. GBF Magazine was the first Black Lesbian Magazine ever distributed globally and was rated # 1 in the country! She is also the former Creative Director of STUD Magazine. STUD Magazine was the first magazine of its kind to focus on the empowerment and acknowledgment of the stud/butch lesbian. The magazine was sexy, trendy; it was very urban and definitely dominant!
Often people say Azaan is like family! Azaan consistently exudes a warmth, and irresistible charisma that connect with all people and cultures.

"I live to dedicate myself and my work to help others. Proceeds from the books I write and publish will be donated to organizations that are dedicated to feeding the hungry, healing the sick, saving our environment, housing the homeless, educating the disadvantaged and empowering the weak. Buy my books, and change someone's life. Make the step towards being a part of positive change", says Azaan

Azaan wrote and published the ground-breaking "GOT HOMOPHOBIA"
What People Are Saying About Got Homophobia!
"Azaan Kamau's Got Homophobia is an extremely important and timely book in an era where youth are committing suicide in alarming numbers. This book should be required reading in every classroom, college, cultural and religious institution." Award-winning journalist, bestselling author and renowned activist, Ifalade Ta'Shia Asanti

"Got Homophobia is thought provoking and ground breaking! This is one of Azaan's most compelling books on race, sociology, sex, gender and the toxin of homophobia in America! Got Homophobia is one of the most prolific books of our time"!
Author & Publisher Katrina Hobbs

"Azaan's new book Got Homophobia is profound and quintessential to our current climate of homophobia and bullying. This book is a must read for every parent and educator in the country"! Poet & Best Selling Author Salima MaSud

"Azaan's book gives voice to all of the gay people who have felt muted and silenced. It empowers those who have felt the sting of someone's intolerance" Book Review Guru