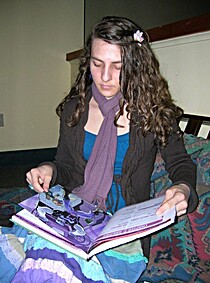 Quant a miI'm in the middle of re-tagging everything, so some books have extensive tags, and some have none.

I'm also in the middle of moving, so right now this library is a jumble of books that I own and have read and loved, books that I own but haven't read but want to keep track of as I move, and books I've read but don't own and want to remember I read them!

Quant a
la meva bibliotecaMost of these books are in my attic bedroom, arranged by genre, author, and how often I reread them. Art books are arranged chronologically for general history or criticism, and alphabetically for monographs.

I keep changing my mind about whether I want my LibraryThing to reflect all the books I currently own, or books I've read but maybe don't own but I still like, or all of the books I've read, ever. It's closer to the latter, at the moment, though I can't remember a lot of the books I've borrowed from friends and libraries. The problem with this is that then most of my "similar libraries" are other people who have read the 7 Harry Potter books, 13 Lemony Snicket books, The Lord of the Rings and the Hobbit, 4 Alanna books, and some of the same comics. If these are the 40 books we have in common (sometimes out of 1000s!) we don't actually have much in common, and I'm not interested.

The other problem with this comes with my art books, most of which I will never "read."