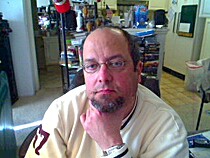 Quant a miI am a lawyer by trade, not by definition. I love the notion that I have enough experience in my life that I can understand all of the profundities that exist in the world and that I will never understand them all to the extent that I might, even if I was able to live to be 300 years old. Not that I'd want to. I couldn't afford all the Metamucil. My most notable accomplishment has been the care and feeding of my son Mitch, who is a rising star in the music business, a drummer extraordinaire. And, as I write this, 22 years old and a recent graduate of the Jacobs School of Music at Indiana University. I am called a great father, a mensch and an all-'round decent sort. I am a lawyer, too, which keeps me in books and other necessaries. The only thing that I wish I had was my besherta (that's Hebrew for, roughly, "the one who is meant to be") who would be someone who can appreciate the fact that I really like "Hogan's Heroes" and have read _La Nausée_ in French. Well, until it IS meant to be, I have my books regardless. And they are relatively maintenance-free. That is, after I apply the Brodart covers. They just don't keep me warm at night...

Quant a
la meva bibliotecaMy library is filled with the books that I have either read or intend to read. It's not all about quantity and hopefully I can say that I have a decent library from which I can learn about the world and about people in general -- how they've lived, why they live the way they do and why people are the way they are, all, I suppose, in an effort at self-understanding as well as a wider understanding of the reason the world is the way it is. Plus, I'm Jewish. So I suppose if you were to take a general overview of all my books, they probably would fit within the reasons I listed above for they are, at fundament, the reasons for living at all.