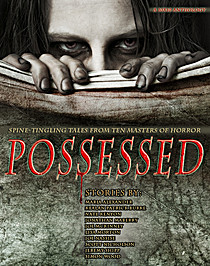 Quant a miNate Kenyon grew up in a small town in Maine, an avid reader and writer from a very early age. He attended Trinity College in Connecticut, majoring in English and winning awards for playwriting and fiction. After graduation some of his short fiction found publication in literary and genre magazines such as Nude Beach, The Belletrist Review, Nocturnal Ecstasy and Terminal Frights.

Kenyon moved to the Boston area in 1995 and took a position working in the marketing and communications field. In 2005 he sold his first novel, Bloodstone, to Five Star Publishing (Thomson Gale). Bloodstone was published a year later to critical acclaim, eventually becoming a Bram Stoker Award finalist in hardcover. In 2007, mass-market paperback publisher Leisure Books signed him to a two-book contract for Bloodstone and his next novel, The Reach. Bloodstone was released from Leisure in May 2008, and The Reach hit shelves in December. The Reach received a starred review from Publishers Weekly. His third novel, The Bone Factory, was released in July 2009 and received raves from Booklist, SHROUD Magazine and many more. Sparrow Rock was released in 2010. Both The Reach and Sparrow Rock have been optioned for film.

Kenyon's latest project, based on the Blizzard video game franchise StarCraft, will be released in the fall of 2011, and he is currently writing a novel based on Blizzard's Diablo franchise, due out in early 2012, both from Pocket Books.

Kenyon has a trade paperback science fiction novella, Prime, released July 2009 from Apex Books. He has recently had stories published in Shroud Magazine, Permuted Press's Monstros anthology, Legends of the Mountain State 2, and has many others forthcoming. He still lives in the Boston area, and is at work on his next novel. Visit him online at www.natekenyon.com.