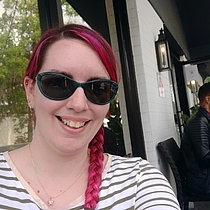 Quant a miIn general, my interests are in folklore, linguistics, history, and children's books. Also, I love YA fantasy. I was an English major and never lost my love for early modern literature, Postmodernism, or funky literary techniques, though I tend to reach for easier reads now that I work full-time as a database admin. (PS: totally got into that field because of my aborted attempt at library school and LibraryThing) I previous worked for 7 years in visitor and member services at a contemporary art museum.

My absolute favorite things ever in fiction? Unordinary narrative structure, unreliable narrators, and well-done time travel. My favorite novels ever (which may or may not include those elements) are Fantomina, Adios, Happy Homeland!, The Monk, If on a winter's night a traveler, Of Fire and Stars, Bloody Jack, The Areas of My Expertise, and Julio Cortes's short story collection Blow-Up.

I am queer and on the autistic spectrum. I no longer participate in Talk because of anxiety, but I am nostalgic for the years when it was my big social scene.

I have a blog where I share screencaps of handwriting from old movies. It is very niche and obsessive and I've been running it since 2015.

Quant a
la meva bibliotecaMy library pretty much represents the books I own or have owned while a member of LT. I collected American Girl and other series books, so there's a huge skew that way. Also, I used to want to be a children's or YA librarian, and I never got rid of books I bought as a kid or teenager, so they fill another chunk. And then there are the books I had to get for my undergrad courses - lots of English and American lit.

My rating system:
3 is an average book. I enjoyed it, or didn't regret reading it. Most books are a 3.
4 and 5 stars are for books I had a strong, positive emotional reaction to or identify with strongly as a book I would carry on multiple moves or buy my own copy.
2 is a book I didn't care overly much for, but isn't really bad.
1 or less are truly awful books with little (or nothing) to redeem

I revise my 4 and 5 star ratings down to 3 if my emotional connection fades.

My Collections
I have four primary collections. I don't use "My Library" because of debates about what that means, back when collections were introduced and through 2012 or so.
Books I Own - books I own and want to admit to owning
Read But Unowned - I don't own them, but feel a connection to them // I want recommendations/connections based on them
I Have Read This Once (or More) in the Past - I read this book and want a record of having read it, but don't really care one way or the other about them; mostly this is because my LT recommendations were like 60% books I'd already read and I thought it was kind of useless like that
No Recs/No Connex - books that I own but don't want associated with me or that I don't want to have included in my statistics (but I don't want to not have them in my catalogue, because they're on my shelves...)