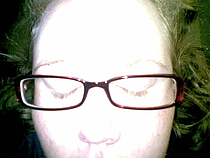 Quant a
la meva bibliotecaMy library is somewhat eclectic. This eclecticity (I’m sure that’s not a word!) has lessened somewhat since 2007 when I embraced YA fiction and have concentrated on reading and purchasing books under this banner.

My physical library is ever expanding as I'm one of those book buying addicts who are so prevalent here on LibraryThing. That said, in 2015 I finally embraced eBooks and digital audio books so the physical space taken up by this addiction should (hopefully) plateau and curb my need to purchase a new bookcase. (***NOTE: It's now 2018 and that DID NOT HAPPEN. I am still buying physical books. LOL). My books line the walls of my living room. I love being surrounded by my books (and I probably spend too much time finding pleasure in staring at them!)

I rate books based on feelings rather than literary merit, although I have been known to take that into consideration. Since joining LT, I’ve become much more methodical about keeping track of what I read and when.

I’ve done a pretty good job of identifying which books I’ve read since 2005 and have placed them in collections according to year of reading. The collection of books marked as ‘read pre-2005’ is incomplete and will likely remain so. Of course, as I remember a book from my childhood or teen years I’ll be sure to add it to the list.

I still haven't entered all the books from my physical library to my LT library. I'm sure one day I will get around to this. Although, I have been saying this for over six years... so I might just be lying to myself.