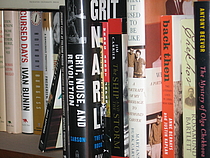 Quant a miI have been a bookseller since graduating with an MFA in Creative Writing in 1985. I co-owned Vertigo Books, an independent bookstore, with my wife. We opened in 1991 at Dupont Circle in Washington, DC, then moved to College Park, MD in 2000. We closed in 2009 and I now sell books online as Rear Window Books (see link below). Since 2011 I have been the Assistant Book Buyer for the Smithsonian museum stores.

Quant a
la meva bibliotecaAs a bookstore employee and owner since the 1980s, I have accumulated a lot of books, some of which I've even read, all of which I'd like to read. Fiction predominates, mostly what upper crusty types refer to as Literature.I enjoy international and some American mysteries, the more Noirish the better. My nonfiction is heavily weighted toward history and biography, along with music and film. I've also got quite a number of titles about Russia and Russian literature, a passion of mine since taking a Russian Lit class in college with the wonderful Professor Richard Yatzeck. And then there are the children's books, from my two daughters. The younger one's book review blog can be found at http://girlknowsbooks.com/.