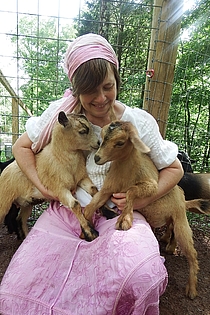 Quant a miI'm a lapsed academic. In a former life, I taught British Literature and Critical Theory. Now, "I tend to my garden" and my goats. I've lived in a commune, tended compost toilets, written technical documents, worked for an alternative newspaper, "professed" literature, and tried to imitate Socrates in his gadfly mode. Politically, I sit on the left, which means that I've never had the opportunity to vote for a candidate who represents my viewpoint. Personally, I love roses and hats - something to do with being Southern. I spent the first half of my life trying to move to New York, starve in a garret, write exquisite poetry, die from a lingering but not disfiguring disease, and have a deathbed scene to surpass all of the excesses of Victorian sentimental literature. It appears that I won't be starving in a garret in New York. They're far too expensive even given the current financial climate. In the meantime, having witnessed starvation firsthand, I no longer romanticize it. So I've become an organic gardener. As for my death, I hope I depart with aplomb and that my family throws a perfectly irreverent funeral followed by a party with lots of dancing. I like dancing. She, who said, "I'll dance at the revolution," had the right idea.

Quant a
la meva bibliotecaMy library follows no particular rhyme or reason. I read everything from German philosophy (in particular works from the Frankfurt School) to light comedy. In rating books, I'm fairly idiosyncratic. How after all does one compare Jürgen Habermas to P.G. Wodehouse? One doesn't, or at least I don't. If you wish to compare, you may. If you see a rating of three for one of Kant's texts and a five for a Wodehouse novel, you should not conclude, "This crazy woman thinks Wodehouse, a mere writer of piffle, is better than Kant." My rating merely reflects how well Kant has accomplished his aim according to the merits of his discipline and how well Wodehouse has succeeded at his chosen task: to write light farce. I realize some postmodern "jouissancers" may think Wodehouse is, indeed, superior to Kant, or that I have no grounds for making a comparison at all. Again, if you fall into this category, by all means continue with your philosophizing. I won't stop you. In fact, feel free to drop me a note in which you present (with evidence) your argument. I favor wit over pomposity. I also believe we should treat one another gently. I will ignore you if you yell. And please remember, I may be little but I'm fierce (to paraphrase Shakespeare).

For more about goats, check out my blog It's a Goat's Life