THE DEEP ONES: "The Haunter of the Dark" by H.P. Lovecraft

THE DEEP ONES: "The Haunter of the Dark" by H.P. Lovecraft

"The Haunter of the Dark" by H.P. Lovecraft

First published in the December 1936 issue of Weird Tales 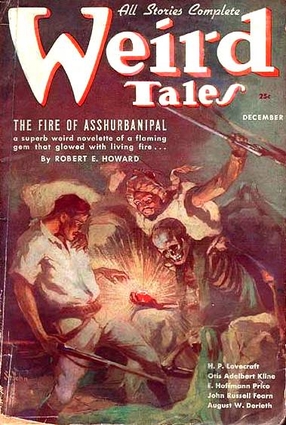 Bring your own shining trapezohedron?

Another relevant link: The prior DEEP ONES discussion of "The Shambler from the Stars," the story to which this one is HPL's reply.

I'll be reading this out of Tales of the Cthulhu Mythos so that I can (hopefully!) sneak in a quick re-read of "Shambler" as well.

I really liked this passage:

Of the Shining Trapezohedron he speaks often, calling it a window on all time and space, and tracing its history from the days it was fashioned on dark Yuggoth, before ever the Old Ones brought it to earth. It was treasured and placed in its curious box by the crinoid things of Antarctica, salvaged from their ruins by the serpent-men of Valusia, and peered at aeons later in Lemuria by the first human beings. It crossed strange lands and stranger seas, and sank with Atlantis before a Minoan fisher meshed it in his net and sold it to swarthy merchants from nighted Khem. The Pharaoh Nephren-Ka built around it a temple with a windowless crypt, and did that which caused his name to be stricken from all monuments and records. Then it slept in the ruins of that evil fane which the priests and the new Pharaoh destroyed, till the delver’s spade once more brought it forth to curse mankind.

When you consider that it ultimately ends up in the "deepest channel of Narragansett Bay", that's quite a history!

In the notes to the LoA volume, Peter Straub observes that "620 East Knapp Street, Milwaukee, Wisconsin" was Robert Bloch's actual address in 1935.

Something that struck me (with perhaps more impact than it ought) about that passage is the implication that Atlantis was somewhere near Crete, rather than the traditional location in the Atlantic. Where ideas placing it in the Aegean current in HPL's day?

The idea that the destruction of Atlantis described the eruption on Santorini/Thera was not really well-known until the excavations in 1967 by Spyridon Marinatos.

Not sure if this idea was current before then.

Linking the fall of Minoan civilization to the end of Atlantis seems to have been discussed in the 1910's - but in pretty specialized magazines, so I have my doubt Lovecraft would have been aware of them.

Of course, strictly, Lovecraft doesn't mention how far from home that Minoan fisherman was in the first place.

7, 8 > Thanks. And yeah, obviously, HPL might have had in mind a Minoan out in the Atlantic in mind, and perhaps that's what I'd automatically assumed if I hadn't been familiar with the Atlantis-was-Thera conjecture.

I think that HPL took this story seriously and it is very dark (sometimes literally so) and somber because of that. It works quite well as a horror tale, even without the novelty of the Blake/Bloch connection. The "Haunter" reminds me a bit of the creature in 1957's THE CURSE OF THE DEMON, which was itself based on an M.R. James story.

I agree. I hadn't considered the M.R. James comparison, but it really works here.

By the way, I'm re-reading this from a Dutch translation - so I'll refrain from any comment on style etc.

A little known non-fact: The Blake diary passage at the end of "The Haunter of the Dark" inspired the Moody Blues' "Nights in White Satin" and the Beatles' "I Am the Walrus."

light is dark and dark is light...

But seriously, folks. I hadn't really picked up on the whole Khemetic flavor (ankhs in the church decor, history of the trapezohedron passing through ancient Egypt, Nyarlathotep's Egyptian angle) in my previous reads of this story, but I really caught it this time.

The Blake diary entries that close the story have of course become a well known cliche of this kind of tale (especially in the more amateurish "Mythos" attempts), but I think it was pretty much cutting-edge for HPL. I like how he uses it here - Blake's short, terse exclamations might as well be someone in similar dire straits desperately tweeting away in 2012.

4 > I decided to read "Shambler" (which I hadn't read before) tonight. Can't say I really liked the direction Bloch took things.

Back to "Haunter", continuing to write until the very end goes back at least to the narrator of Poe's "MS. Found in a Bottle". But yes, "Haunter" is an example were it works better than it often does. It doesn't hurt it's a writer doing it.

Students in the Psi Delta house, whose upper rear windows looked into Blake's study, noticed the blurred white face at the westward window on the morning of the ninth, and wondered what was wrong with the expression. When they saw the same face in the same position that evening, they felt worried, and watched for the lights to come up in his apartment. Later they rang the bell of the darkened flat, and finally had a policeman force the door.

I like the imagery evoked in this paragraph very much. A nicely done creep-me-out sequence, Howard!

A good one, I think. The character-scrawling-away-until-his-grisly-end think is an annoyance (one wonders if the umlaut was placed correctly over the "a" in "Iä"), but it's a pretty minor one.

I love how in "Shambler" Bloch gives the HPL doppelgänger a relatively quick and merciful death, but in "Haunter" HPL puts Blake through some serious and prolonged psychological and spiritual anguish. Guess Grandpa believed in escalation of hostilities. :D

I am incredibly fond of the phrase abandoned lair of cosmic evil. I think I will have it painted on a large placard and place it over the front door of my apartment.

The great storm broke just before midnight on August 8th.

An enjoyable selection. Having just read it last week, I couldn't help but note the return of a glowing stone fabricated off world and sent to earth as in The Challenge from Beyond. Even in that throw away tale Lovecraft is constantly reworking ideas.

I also enjoyed the list of stories by Blake, including the "The Feaster from the Stars". When we read "The Shambler from the Stars", I remember thinking that the title seemed so arbitrary - like Bloch just needed a pulpy title. The monster didn't shamble - it moved with preternatural speed. Here Lovecraft fixes the title and gets in a friendly little dig at the lurid nature of Bloch's tale.

This is the third time I've read this story.

I noticed a couple of new things this time.

First, Grandpa really indulges his architectural interest here -- matched, perhaps, only by The Case of Charles Dexter Ward. He lovingly describes the church and neighborhoods around Providence.

Second, this struck me, along with Lovecraft's "The Music of Erich Zann", as a tale of otherworlds intruding into a contemporary setting. Lovecraft sets the tale in his present day in his hometown -- no going to to Antarctica, New Orleans, or Australia. Like "Zann", this is a story of mysterious other worlds being glimpsed in a modern urban setting.

And, as Joshi has noted, there is an element of psychic possession here like "Dexter Ward" and Lovecraft's "The Thing on the Doorstep".

In reading a trio by HPL (suggested as a grp read in Gothic Lit), this placed second in my shuffle. Likely only because of my level of unease. The deep woods (as in Wendigo by Blackwood) or church grounds, cemeteries, ruins don't incite terror in me like they might in others. Open water as with Dagon? Absolutely. The creepy twisty Rats in the Walls had such a prior build up that I felt let down or swindled, as it seemed almost funny. Good ending though. Cats make my life miserable so I rarely get behind any story where they feature prominently, nor do animal habits signify anything to me. The language is shocking at times.

The community in the rain huddled together whether onlookers approve or not is something familiar in my background, so the story itself made perfect sense, even with the more unusual elements included.