THE DEEP ONES: "Staley Fleming's Hallucination" by Ambrose Bierce

THE DEEP ONES: "Staley Fleming's Hallucination" by Ambrose Bierce 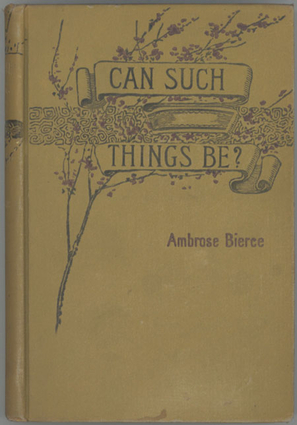 The Complete Short Stories of Ambrose Bierce
Ghosts: A Treasury of Chilling Tales Old and New
The Spook House: Terrifying Tales of the Macabre
Can Such Things Be?

I need to try to untangle the publishing history for this one. Pictured above is apparently a New York: Cassell, 1893 edition. The usually reliable ISFDB.org puts the volume at 1910. The story seems to have been published somewhere in 1893, although 1906 also comes up, including in the DEEP ONES nominations. Hmmmm...

Also strange is that it is not included in my Dover edition of Ghost and Horror Stories of Ambrose Bierce.

Ambrose Bierce: The Devil's Dictionary, Tales, & Memoirs for me.

Downloaded the Amazon version of Can Such Things Be? linked to in >1 KentonSem: (http://amzn.com/B0082YSTW2).

Thanks for the link to the "Joshi on Bierce" pdf from the Library of America. I don't believe I've seen that before (the Joshi interview at the Ambrose Bierce site (http://donswaim.com/bierce-joshi.html) is fascinating reading, too).

Some interesting links, as usual.

I'll read this out of the Tartarus Press collection An Occurrence at Owl Creek Bridge and Other Stories.

A Newfoundland (the non-supernatural variety):

The white paw of death! I promised myself I wouldn't mention Cujo, Devil Dog - Hound of Hell or "shaggy dog story". Oops.

Nice line Bierce uses to describe M.D.-mojo: "The physician laughed at his own pleasantry, but narrowly watched his patient from the corner of his eye."

What an efficient little story. It wasn't very scary, but I have to wonder if it might've been a contributing inspiration for HPL's "The Hound."

What an efficient little story.

Now that about sums it up. The chills are slight but definitely aided by how quickly it all goes.

I was struck by the modern tone of the prose, especially the dialogue. Maybe people don't actually speak so differently as I'd expect, compared to 100 years ago.

Reading Joshi's interview for the LOA newsletter, I came across this:

Bierce valued literary concentration: packing the maximum amount of emotive power into the smallest space. He felt that such a methodology would have the greatest impact on his readers, and that the novel’s somewhat looser structure resulted in a correspondingly weaker or more diluted impression. I am not at all convinced that he was wrong in this.

I also read Joshi's characterization of Bierce as beginning and closing a genre, "satirical horror". With that in mind, I wondered where the satire might be in this short tale. Perhaps, satirizing the horror tale itself, and yet with an appreciative stance. I certainly was expecting something more to occur, but looking back, the brevity of it worked quite well.

First, this is Bierce in a less ambiguous mode than he sometimes works in.

Third, Dennecker's Meditations is a fake tome that, I believe, may have led to Lovecraft's invention of the Necronomicon rather than Chamber's The King in Yellow. Thus, as >8 paradoxosalpha: suggests, this story may have inspired "The Hound" in more way than one.

For further info, see, well, me at https://marzaat.wordpress.com/?s=Fleming.

That's a fascinating blog entry, effectively bringing in other tales of Bierce (which I've not read). Hope to follow up and read Parts I - V of your Weird Stories posts.

Absolutely. He leaves no doubt in the reader's mind that Staley is a murderer.

Nice bit of proto-flash fiction from Bitter Bierce. My favorite passage (one of the more amusing descriptions of what gamblers refer to as a "tell" that I recall reading in fiction):

Fleming half-rose from his chair, sat again and made a visible attempt at indifference.

Exactly what the doctor was looking for in >7 KentonSem:!

Dennecker's Meditations is a fake tome that, I believe, may have led to Lovecraft's invention of the Necronomicon rather than Chamber's The King in Yellow.

There are an awful lot of these in pre-HPL weird fiction, aren't there? We saw one in that Maupassant story we read a couple weeks ago, too.

>13 paradoxosalpha: Absolutely. He leaves no doubt in the reader's mind that Staley is a murderer.

But he wouldn't deign to say so, explicitly.

I found myself wondering what happens afterwards. Does the good doctor find himself accused of murder?

Bierce rattles through this one at such a pace that, like >10 elenchus: I wondered if it was a kind of spoof on conventional ghost stories; because there is nothing really original in the events of the story, only in the style of the telling.

I haven't read Randy Stafford's blog yet, but the fictional work, Denneker's Meditations reminded me of the snippets of poetry - all by Bierce, but credited to a range of made up names, - that are spread throughout the entries in The Devil's Dictionary.

Excellent- thanks, Art! So, first published in Cosmo!

I still can't put my head around that. Not to mention, that Cosmo was extant in 1906. But a quick troll of Wikipedia reveals:

Cosmopolitan is an international fashion magazine for women. It was first published in 1886 in the United States as a family magazine, was later transformed into a literary magazine and eventually became a women's magazine in the late 1960s.

Which makes a bit more sense, presumably fitting into its literary period. But even so.

No problem. Once again, it was gonna bug me until I found out.

Yeah, definitely weird (in the usual sense of the word). Here's the cover:

Cosmo looked a bit different back in the day! :D

There's a story germ here somewhere ... aspiring fashion model shows up for a shoot at a high-profile magazine, gradually discovers that there's something wrong with the crew and other models: in fact, a malign preternatural intelligence is using their images to vampirize the attentions of the reading public.

Snark aside, I think there's promise in that idea!

When I posted #21 I was thinking that Leiber's style would be suited to the idea; maybe I was subliminally recalling "The Girl...."

Ahhhh Ambrose Bierce. So much better than Poe.

Though his Civil War stories are better than his Weird.

Just noting that Denneker's Meditations was also used by Bierce in A Psychological Shipwreck, lending credence to the idea that HPL cribbed it as a handy grimoire to use whatever relevant occult phrasing would supplement the specific story at hand.