THE DEEP ONES: "Mr. Gaunt" by John Langan

THE DEEP ONES: "Mr. Gaunt" by John Langan

First published in the September 2002 issue of The Magazine of Fantasy & Science Fiction. 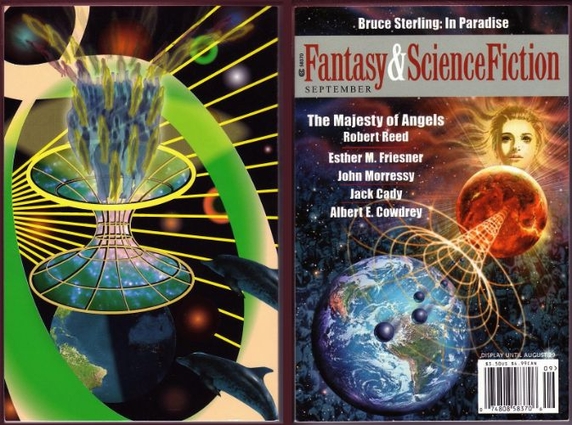 Better check and make sure the entire story is included, Art. When I checked that link earlier, it seemed that some pages a little further in were omitted. Hope I'm mistaken!

New Cthulhu for me.

Yeah, I've triple-checked it now - the whole thing's there. At least it is when I look at it with my browser (Google Chrome); perhaps it doesn't work as well with other browsers.

Another one for New Cthulhu here.

Right, it's all there, and as always I'm appreciative of the online link as it facilitates my participation again this week.

Fantastic! Glad to be of service. :)

So, I was pretty delighted by the layered quality of the narrative here.

Having the main character named after Henry James by his father (a James scholar) brings all the metatextual possibilities into high relief, of course. The later paragraph that begins "Something else: how much you remember of the literature classes you sat through in college ..." is a wonderful capper.

The real "horror" of the Langan's tale seems to be that of Henry's dying father, who realizes that the story he brewed up as a caution for his son may eventually prove to be a lure instead, and that even confessing its true basis could only cement this effect. Isn't that the hazard of all didactic literature?

The sense of inevitability is pervasive, and I like too that on one level it's a threat embodied by the George & Gaunt team, but behind that lurks a threat to George himself. He truly has unlocked the Door to Hell and though what he unleashed thereby moves slowly, over decades, those steps he hears are clearly for him.

I really enjoyed the Henry James patina overall, especially after our readings of a couple James tales. The tale itself seems to delight in mimicking James, making us wait for the reveal. Overall I think Langan successfully employed the James locution, it adds to the sense of tension even as he pokes gentle fun at the Jamesian style.

I read this last year and am only halfway through a re-read. For now I'll just add that the Henry James references are welcome, but I'm also reminded of M.R. James, whom Langen also mentions early on in the story. In particular, I keep strongly connecting George with Mr. Karswell, the occultist villain of "Casting the Runes". In fact, think I'll add that tale as a late entry to the current DEEP ONES vote.

Langan is quoted (that Shock Totem interview linked above) as sharing my key interest in horror fiction:

I’ve always loved monsters .... I love their gaudiness; I love the way they embody what I see as one of the horror narrative’s central concerns, the irruption of the irrational into our daily experience. I expect my affection for them grows out of a number of different childhood passions: for dinosaurs, for comic books, for the mythology of the Greeks and the Vikings.

As for madness, I suppose it’s the complement to the monsters. If they represent that incursion of the irrational as an external force, then madness figures it as internal, a rupturing of the self by the self.

The irruption or incursion of the irrational: he says it so much better than I ever did. And while I'm less keen on dinosaurs, my interest in horror fiction does overlap nicely with my interest in comics and especially mythology.

And then he drops a hint about Godzilla vs Cthulhu! I imagine that story would make the cut of a DEEP ONES roster, if he ever finishes it.

I do like a good living skeleton, and I appreciated that Mr. Gaunt turned out to be an overthrown master of George.

I also liked that the mystery behind the Clarissa/George relationship was never fully detailed. Fellow occult students? Was she ignorant of his occult pursuits and then made a horrible discovery?

While I was originally disappointed by the ending where George is looking to recruit Henry, the nested stories, the multivalences of the Gaunt story (fable warning, childhood memory, actual history) somehow created, for me, the idea that the concluding image of that arrow pointing to the open door stood for Henry's character dooming him to this scene all along.

And that stone coffin was pretty neat too.

I think that's a key point. We're not slogging through a Jamesian pastiche with "Mr. Gaunt".

Only finished the story today; nothing to add to the above comments, really, except maybe to reflect that I wouldn't have thought a living skeleton would be credible monster in a modern story.

Because just thinking about the skeleton in film, when was it not already a cliché/played for laughs? The silent era? or never? - but Mr Gaunt worked here (Actually I've just remembered the ghost story "Thurnley Abbey". Maybe the living skeleton figure works better as a written description in a narrative, than than seen as a thing on wires, or stop motion or CGI).

Anyway, now I'm going to do some supplemental (re)reading, namely the entry for "Les Mystéres du Ver" in The Starry Wisdom Library

Agree that a skeleton works better as a written narrative, the visual comes across as vaguely comical (unless, presumably, I'm faced with Mr Gaunt in real life).

I read Langan's blog entry reporting on his contribution to The Starry Wisdom Library, haven't read it myself. Tell us what you think of it, as well as the book itself. It would appear to be an impressive artefact, if nothing else.

"Artefact" is right. The Design and layout is credited to Andrew Leman of the H. P. Lovecraft Historical Society, and a lot of care has been taken to make this book look like a genuine 19th-century publication (or almost, the realities of commercial publication spoil the illusion to a certain extent - a barcode and ISBN on the dust jacket, the genuine copyright page, etc. Although in fact these are explained away by S. T. Joshi's in-on-the joke introduction: this is a reprint of a previously unknown document. So that's OK).

The back story is developed from the Lovecraft's "The Haunter in the Dark". in which Robert Blake discovers a huge occult library while investigating the Starry Wisdom cult's abandoned headquarters (an abandoned church). The idea is that this library was at one point to have been auctioned off, and things had progressed to the point where an auction catalogue had been prepared.

So, the book itself consists of entries for each "lot" - which turn out to be, of course, the grimoires and forbidden books familiar from Mythos fiction. In many cases the entry has been written by the creator of the book it describes, as John Langan's entry for Les Mystéres du Vur, Ramsey Campbell doing The Revelations of Glaaki, and Wilum Pugmire submitting the entry for The Sequa Valley Grimoire. Old favourites like The Pnakotic Manuscripts and The Book of Azathoth, and of course The Necronomicon, also receive entries (each contributor has a spoof mini-biography in keeping with the idea of a 19th century scholarly (albeit Lovecraftian) publication).

Each entry proper is prefaced with a very nice, convincingly bookish catalogue entry (e.g. "Printed at the works of Conrad Ketrick, Quarto. 121 pp. On Japanese vellum. Bound in full black crushed Morocco with titles and decoration in gilt to spine", etc.)

I don't haven't read enough Mythos stories to know the ratio of summary/reteling of existing stories to new material. Of course the format of the book means that there's next to nothing in the way of traditional narrative or character development (the more successful as a spoof auction catalogue this is, the less opportunity it allows for such things). In general this is more of a Borgesian fiction (or meta-fiction), I guess. That doesn't make it an intolerably dry read though, the format does allow for in-jokes and the like. For example I spotted the subtle references to M. R. James (specifically to "Count Magnus") and to Dracula in John Langan's entry.

Very nicely put. I've not much to add, really, except that The Starry Wisdom Library is a really beautifully done in-joke for lovers of weird fiction. The more knowledgeable you are on the subject, the more fun it is, which means that everyone here should track down a copy!

Just finished this story today - I enjoyed it and it has made me want to look up more Henry Jame stories (the only one I have read up to now is 'The Real Right Thing'). Interesting to read about the Starry Wisdom Library book mentioned above (which I have not heard about before) and that Langan's Les Mystéres du Ver has its own entry - I had assumed that he was merely alluding to Bloch's De Vermis Mysteriis. Les Mystéres du Ver also plays a role in Langan's phenomenal novella Mother of Stone, which is one of my favourite Weird fiction pieces to date.