THE DEEP ONES: "The Birds" by Daphne Du Maurier

THE DEEP ONES: "The Birds" by Daphne Du Maurier

"The Birds" by Daphne Du Maurier

First published in the October 1952 issue of Good Housekeeping. 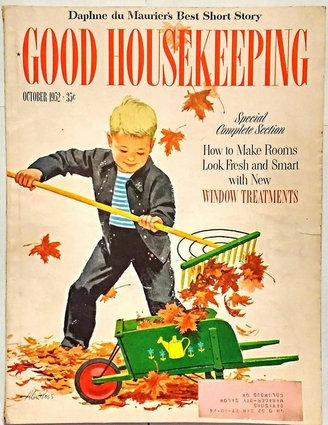 The Birds and Other Stories
Classics of the Macabre
Witches' Brew: Horror and Supernatural Stories By Women
The Ruins of Earth

I'm glad this is available online because I have absolutely no idea which box my Du Maurier books are in.

Hurrah! I'm in time to join in on this one. I read this years ago but will read again to brush up.

If I can find it in the disrupted library, I'll be reading this in The Ruins of Earth.

Online for me! I may be late to post, though, haven't started yet and as I recall it's a long-ish one?

ETA From the Daily Beast article under MISCELLANY:
Hitchcock's filmed version is a technical tour de force but a movie that never gets under your skin. It’s just a great example of what money can buy when it’s spent by a genius. Du Maurier’s story, by comparison, looks like a miser’s dream: a 50-page novella that compels us to keep reading using only the barest prose, never two words where one will do.

There seemed to be a lot of errors in the first online version I posted above. I just switched it out with one that seems ok so far...

I downloaded the first version last night, and skimmed it. Wasn't sure it was complete, but how to know before I've read it?

I'll look at the second version and compare.

The paragraphing appeared to be badly mucked up and there were a lot of typos. When you compare the versions, it appears that they are not the same at all! I'd have to dig out one of my books to compare. Something's not right with one or both of those online versions... For instance, there is a "Mr. Trigg" in the first, but not in the second. Can anyone verify which one, if either, is the correct version?

Both links appear to be used for K-12 grades.

Maybe I'll try my local library, see if I can get a published version.

Looks like I'll need to go on a Daphne-hunting expedition in my boxes of books this weekend if I'm to re-read this one. I do remember the first time around thinking that it was surprisingly grim and made Hitchcock's film version seem like weak tea by comparison. I was also startled at the resemblance the overall plot and tone had to Romero's NIGHT OF THE LIVING DEAD. Forget I Am Legend - I think that "The Birds" was more of an influence.

I read the first online version posted. Comparing the first few paragraphs with those of the 2nd, it seems the former is a shortened version of the latter. Some kind of abbreviated classics version for school kids?

Think I'll read the second online version: my library didn't have an eBook edition available. Thanks for noting the abridgment, AndreasJ: the second version also may be adulterated, but seems a better bet.

Did we ever 'stablish whether the 2nd online version was unadulterated?

I'm going to try to excavate my Du Maurier this weekend to confirm. Shall we proceed with the link above for now? Sorry for the unexpected lack of availability on this one. And it got 12 votes!

The ground was too hard to dig. It was frozen solid, yet no snow had fallen, nothing had happened in the past hours but the coming of the east wind. It was unnatural, queer. The weather prophets must be right. The change was something connected with the Arctic Circle.

I had forgotten that the birds were being driven mad by climate change!

I'm only partly through, but I remarked how quickly du Maurier gets down to business. A small bit of scene setting, but angry birds are evident very quickly. With a title like "The Birds" I'm not sure how many readers, even when first published, are exactly surprised by the fact the birds are hostile. Nevertheless, I like the effect achieved by describing the unnatural and scary behaviour in prose that is unhurried, almost undramatic, but still propelled by a sort of inevitable forward motion. Even early on, I feel tension that what's coming is going to be much bigger, and it's not going to be easily stopped.

I'm not sure if online v2 is unadulterated, but decided I'm going to use it as the best option for me right now. I do look forward to settling that question, though.

Du Maurier definitely gets right down to business, doesn't she? I appreciate the fact that Nat gets the situation almost right away and immediately starts thinking "siege". There are no wasted paragraphs of our protagonist being tediously dim about events. There are no wasted paragraphs in Du Maurier, period, I think. The littlest birds seem to be the harbingers, although I have to hope that the first unseen creature "tapping" at the window might have been a raven...

I wonder if Nat's difficulty in getting the farmhands to take heed of his story of the first night ("Maybe they’d laugh at the whole thing. Go off to a dance or a whist drive."), and the later description of Londoners having their fun at the idea of birds (“Come and watch the birds!”) ... was Du Maurier heading off skeptics of her own tale? Or perhaps merely building tension, assuring the reader it's not so easily dismissed, this flock of birds. Raise the idea precisely to dismiss it, before it gets in the reader's head and dissolves the fear.

I think both ideas are at work. Du Maurier was surely taking a risk with using birds. Such lovely and generally innocuous creatures shutting down civilization as we know it? I think it was a risk worth taking and a great, unusual choice on her part.

I haven't undertaken a line-by-line comparison (I've read this in the Folio Society's edition of Echoes from the Macabre: Selected Stories, which they've retitled Don't Look Now and Other Stories)) but the online version looks complete. All those semi-colons suggest that the text hasn't been interfered with, at any rate.

I think this is one of those stories that a so well-made on a technical level, and with such a striking central idea, that it is very difficult to find something to say about it.

I wonder how common, in 1952, a downbeat ending was? By the 1970s (I guess I'm thinking mainly of (British TV) one-off plays and what you might call pre-Star Wars cinema), it was so commonplace that the impact was often lost, and it seemed the writer(s) had just not bothered writing the last act. That doesn't apply to this story, of course.

There are several references to World War II: Americans as allies, orders via wireless to the populace from the Home Office in London, use of military to defend the people. Nat also wonders about the use of mustard gas, more a holdover from World War I but sensible given the lack of efficacy of guns and aircraft against birds.

Nat also thinks about how people don't believe him, especially those who didn't experience directly bombardment during the war. " It was, Nat thought, like air raids in the war. No one down this end of the country knew what the Plymouth folk had seen and suffered. You had to endure something yourself before it touched you."

The silence of the birds is one of the eeriest aspects of the action, I thought, both during attack (no crying or calling, just busily attacking a victim or attempting to break into the house) and afterward, silently watching Nat as he moves around gathering supplies. And it doesn't make much sense: even crazed or driven by eco-devastation, there's no reason for the birds to be silent. Nat also thinks about birds "on a mission" to the towns, or "waiting for orders", yet they don't call to each other as they typically would. So, an effective idea, but hardly believable.

Only later did I remember that the German V-1 and V-2 rockets have a silent aspect to them. Primarily the V-1, which were silent after the engine shut off and they dropped to their target.

The V-1's engine made a loud buzzing sound and so they were commonly called "buzz bombs" by the British. Other nicknames were "doodlebugs", "robot bombs" and "flying bombs". As the V-1 approached its target, the buzzing would suddenly stop, and the bomb would then fall silently to the ground and explode. The V-1s were particularly terrifying because they would arrive at all times of the day and in all types of weather.

The V-2 worked much differently, a true ballistic missile. But they also fell from a great altitude and were silent except for the sonic boom (which I believe often were not audible to those targeted except too late).

Unlike the V-1, which flew relatively slowly and at low altitude, the V-2 slammed into the ground at 4,000 miles per hour without warning, except for a double sonic boom shortly before impact.

Both quotes from a cached page on the Nazi V-1 and V-2, apparently no longer on an active server but accessible via Google's wayback machine.

Traumatic to revisit this. Some crazy babysitter put this 1963 film on during my cousin's military wedding reception (hotel room black/white tv? with a dozen little kids!?) in the late 60s when I was a child and those bloody images never fade. I'm afraid the written original will have much less impact, but will judge it on its own merit. I am enjoying du Maurier's atmospheric writing style, along the lines of Radcliffe, but find her more relentless and raw. I love wild critters but birds in the house bring relapses!

I admit to being fickle, since I cannot bring myself to watch these Hollywood heavyweights (Hitchcock, Allen, Polanski, Cosbie, Miramax, etc.) anymore, as the work is marred no matter the logic or perception. We gave up movies for well over a year after the lawsuits hit the fan, not missing much. Reality tv disturbs my sense of privacy that all of society should be able to take for granted. It was refreshing to escape the gaudy gossip. I do admire Daphne du Maurier's desire to fiercely preserve her own seclusion. I enjoyed researching Cornwall last year, between her work and The Cornish Trilogy by Robertson Davies.