THE DEEP ONES: "The Fog Horn" by Ray Bradbury

THE DEEP ONES: "The Fog Horn" by Ray Bradbury

"The Fog Horn" by Ray Bradbury

First published in the June 23, 1951 issue of The Saturday Evening Post. 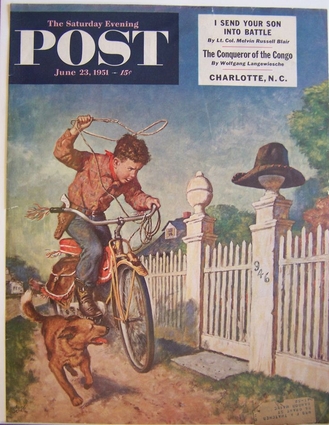 I'll read this story in R is for Rocket.

Think I'll be reading this one from my HC copy of The Ghouls. You might recognize it from the back pages of various 1970's Warren publications. The idea was to provide the original stories that inspired various horror films, but for some odd reason the stories are listed by the movie titles. So, in the ToC, "Spurs" by Tod Robbins becomes "Freaks", "The Color Out of Space" by HPL becomes "Monster of Terror" and "The Fog Horn" by Bradbury becomes "The Beast From 20,000 Fathoms".

McDunn is a curious character. I weighed the reasons why he might cover up the monster, and decided it was probably just that he liked the isolation of his lighthouse lifestyle and didn't want to imperil it. It's not as if he might have endangered the creature itself.

I wonder if this story also supplied some inspiration for the Tom Baker Doctor Who serial "The Horror of Fang Rock." On the other hand, both might have been suggested by "Flannan Isle," quoted in the latter.

I think that the manner in which this giant monster is viewed with such empathy and awe actually informs the entire Godzilla mythos. I bet that Murata, Honda and Kayama were directly influenced by Bradbury's tale when they wrote GOJIRA.

McDunn and the narrator refer to the monster as a dinosaur, but the description (as well as the whole being a sea monster thing) rather suggests a gigantic plesiosaur.

It did have to leave the water to wreck the lighthouse, but that long neck and its ability to survive underwater sure sounds a lot like a plesiosaur. It's definitely not the "Rhedosaurus" from the movie, although that dino is definitely one of the coolest in all of cinema.

As I said when nominating this, it's often (e.g. in its WP entry) been categorized as a sf story; I don't particularly see why. The identification of the monster as a surviving dinosaur is vaguely scientific, but the story gives us no particular reason to believe the characters' identification is correct, and it it has none of the usual marks of the genre: no speculative technology, space travel, or extra-terrestrials. It's hard to avoid the conclusion it's categorized as sf simply because it's written by Bradbury.

Acc'd said WP entry, "The Beast from 20,000 Fathoms" is the original title of the short story, altho the later title is also Bradbury's.

>8 AndreasJ: It's hard to avoid the conclusion it's categorized as sf simply because it's written by Bradbury.

A fair cop, but to be honest, I found this story more "scientific" in its tone and concerns than, say, The Martian Chronicles. All that stuff about the slow trip up from the deeps in order to gradually equalize pressure, for instance. The way in which curiosity and empathy predominates over dread or fear seems to marginalize "The Fog Horn" from the horror genre. I know Bradbury is "a science fiction author" for many who have read little science fiction, but I identify him with horror at least as much as sf anyway.

Ray is "SF" simply because of the words "Rocket" "Space" and "Martian". And maybe "Farenheit". I always think of his genre as "Writer". It's easier that way!

Ah! Bradbury's original title was indeed "The Beast From 20,000 Fathoms". The studio bought the story rights, including the title. Bradbury then switched his tale's title to (the much more Bradburian-sounding) "The Fog Horn" in order to to distance it from the film in future anthologies and collections. Did not know this until now - thanks!

I think we should distinguish between scientificness and sciencefictionness (to coin two horrible neologisms) in literature. This one is relatively high in the former and low in the latter - The Martian Chronicles are the other way around, while say Mission of Gravity is high in both and most literature is low in both.

Just getting around to this one, via the (typo-riddled) online link above.

Plenty of opportunity for terror or horror, of whatever variety, but for the most part Bradbury chooses to sidestep that in favour of the empathy -- an empathy I think is more detachment than poignant, but in any case rooted in observation. That accounts for the "scientificness" as much as anything.

I also found The Martian Chronicles more humanist than science fiction when I re-read it recently. This story shares the same emotional register, if not the same setting.

ETA McDunn's evolutionary perspective (narrating over millions of years, and considering a being which waits disinterestedly as humanity goes its trivial way on the surface) does have a certain affinity for HPL's cosmic indifference.

It's interesting to see the speculation about works that this story might have influenced (and, for once, it isn't me bringing up Doctor Who!).

I was young when I first read "The Foghorn" - 12 years old at most. I was struck by it, and felt a strong sympathy for the monster, in the way that children can be deeply moved by a sad story or song (for example, "Puff, the Magic Dragon").

>4 paradoxosalpha: I don't find McDunn's character curious, because I've read plenty of Bradbury's stories featuring a wise (or maybe only poetically sententious) father-figure. What I realised on re-reading the story, is that he precipitates near-catastrophe by switching off the Fog Horn "to see what happens" - not so wise, then.

First time reading this story and I enjoyed it. I was really pulling for the guys as they raced down the stairs.
To me, McDunn didn't tell the rescuers about the sea creature because he didn't want it to be hunted down. Maybe spending his life watching fishing boats had given him ample proof that it's what men do.

Clocked in with this one in under a year! It goes on the list alongside Something Wicked This Way Comes and Green Shadows, White Whale as suggested by Gothic group members. There is something about Bradbury's history and personality that makes me want to read absolutely everything he ever invented. Old and new, sci-fi or not, novel or short. He just makes me happy! =) Wells and Verne and Orwell take longer to ease into. One by each of them, at any one time, is sufficient.

Bumping this discussion up where it's easier for me to find it, after recent comments in the film thread. Still tbr.