What is the best, most beautiful, complete edition of the Bronte Sisters - Complete Box Set (7 Novels) you've ever seen? The Folio Society version was nice, but was published over a decade and a half ago. Easton Press has only made Jane Eyre and Wuthering Heights.

Does anyone know any hardcover box set of the 7 Bronte novels that are as beautiful as the Easton Press Complete Novels of Jane Austen?

I haven't actually seen any complete edition of the Brontë Sisters' novels.

I do have this page about their edition from a 1992 Folio society catalogue: 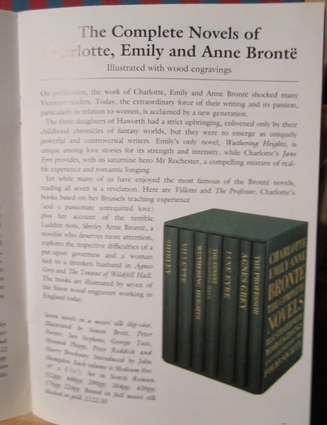 >2 housefulofpaper: I have seen this set a few times in second hand shops, sometimes individual copies, but they always look very faded for some reason (material used perhaps?) I have the two recent Bronte Folio Society editions, but my other Bronte books are paperbacks.

I think this set is available in two versions--bound in green silk (pictured above?) and dark blue buckram with, if memory serves, silver lettering on the binding. I had the latter, bought new from Folio (didn't keep it though after I read it) and it looked as a set that ought to wear well, assuming usual levels of care. At least, I'd had mine for 4-5 years and it looked as fresh as when I got it.

I think my FS copy of Wuthering Heights is from the buckram version of the set, if it was a set...I mean, if all the books were bound/released in this design.

It's actually only quarter-bound in buckram. It has paper sides which bear a repeating design by the illustrator.

Not sure what you mean by "if it was a set"; mine came in a box like the one shown in your brochure... except for the different colour scheme.

It's actually only quarter-bound in buckram. It has paper sides which bear a repeating design by the illustrator.

Ah, you've confirmed that the whole set was reissued in blue buckram.

My Wuthering Heights was from one of the FS sales. It's a stand-alone in its own slip-case.

Didn't know about individual issues of the blue buckram editions...

I'm not particularly pursuing this as a goal, but I wouldn't mind collecting the Brontes uniform with this edition, in which I have only Villette so far: 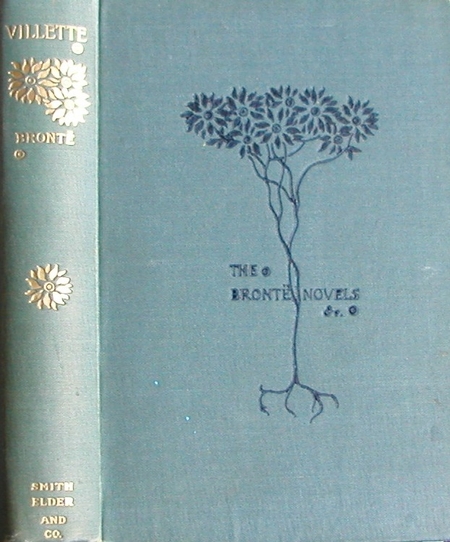 No date but I'm guessing 1880s/90s; attributed to "Currer Bell" on the title page, no illustrations except for the frontispiece, bound in silk, stamped in gold and with gilt top, looks to be an octodecimo or so. Font probably too small for many, but I find it a much more pleasant book to handle and read than most Folios.

I noticed that there is a blue AND a black box set of the complete Bronte novels from Folio Society. Is there a difference between the two in terms of content and durability? Also, which one is the most recent Bronte set released from the FS?

Looking at the relevant entries in Folio 60 reveals quite a complex sequence of events. It starts with the 191st title the Society published, an edition of Wuthering Heights illustrated by Charles Keeping (who also illustrated their edition of The Castle of Otranto, the Society's 1973 selected M. R. James ghost stories, and their complete Dickens edition).

Medium Octavo (225 x 148 x 30 mm). Type 10-point Monotype Scotch Roman. 12 leaves of 2-colour plates printed by Cowells. Bound in quarter black leather with dark red cloth boards - (although not part of a complete edition, I have to say that the features of this book - letterpress, lithographs by Keeping (and printed by Cowells), quarter leather cover - would make a good, clean copy very attractive). (I fear that lithography might start to take on some of the cachet of letterpress, and might lead to older Folios being dismembered for their pictures).

Paul W. Nash goes on to note "this was the first in a series of the Brontë sisters' works, issued in a uniform binding with a geometrical design by John Westwood on the spine, blocked in gold and another colour (red for Emily, green for Charlotte and blue for Anne)" He goes on "for others in the series see items" - i.e. titles numbered by order of publication - 203, 225, 243, 259, 262, and 276. See also item 295."

And then he lists the later impressions of this first title. Reprints in 1965, 1967, 1971, 1975. Not all impressions seen by Nash. Differing slip-case covers noted. Then, reissued with new illustrations (wood engravings by Peter Forster) 1991 - but I'll cover the complete edition in a separate post.

Item 225 (1966) - The tenant of Wildfell Hall. Lithographs by Julian Trevelyan (lithographs printed by the Baynard Press).

Item 276 (1970) - The Professor. Lithographs by Marion Wilson, printed by the Westerham Press.

All the lithographs in this first series of individually-issued titles were in two colours, I think. Folio 60 reprints one illustration each (reduced) from 191, 203, 243, 276

(Item 295 is Elizabeth Gaskell, the life of Charlotte Brontë).

Following on from >11 housefulofpaper:, then.

1991. the complete novels, illustrated with wood engravings. Medium octavo again. This is the edition in the prospectus in >2 housefulofpaper:. Books and case are bound in full moiré silk.

Disappointingly, the texts from the 1964-1970 were cut-and-pasted around the new illustrations (and it must follow that they are offset litho, and not letterpress).

Jane Eyre and Wuthering Heights were issued together in a 2-volume set and also separately. They were also reset in 1997, and these reset editions were also used to make up later reissues of the complete set.

Dated 1996, but not issued until 1997, Jane Eyre and Wuthering Heights were reset.

The seventh to the 9th printings consisted of straight reprints of the cut-and-paste volumes of all but Jane Eyre and Wuthering Heights. These were the reset 1996/97 editions.

Nash records that the Bath Press printed the sets until the 8th printing, which was printed and bound by T.J. International. The 9th printing was by St Edmundsbury Press.

What's not clear is when the binding switched from the green silk to the paper sides. Or what the black and blue cases signify (if anything - the Society used to be a bit casual about the colour of slip-cases and if a particular colour ran out would substitute another).

My copy of Wuthering Heights is a printing of the reset edition. It's printed by St Edmundsbury Press. It looks alright. The printing is crisp on the engravings, the printed letters don't have fuzzy edges. If I'm reading the bibliographic information correctly, it postdates ALL the printings for the complete editions, so I'm not sure how good a guide it is to the quality of the previous printings.

I think I'd prefer the 1960s editions if good copies were available - I haven't checked for availability or prices on Ardis (for example). They might be really rare. If there was a green silk edition that hadn't faded to be had, I might favour it over the blue/black version, especially if it includes the reset Jane Eyre and Wuthering Heights (I think some of the green ones did include these reset texts).