THE DEEP ONES: "Larger Than Oneself" by Robert Aickman

THE DEEP ONES: "Larger Than Oneself" by Robert Aickman

"Larger Than Oneself" by Robert Aickman

First published in Powers of Darkness(1966). 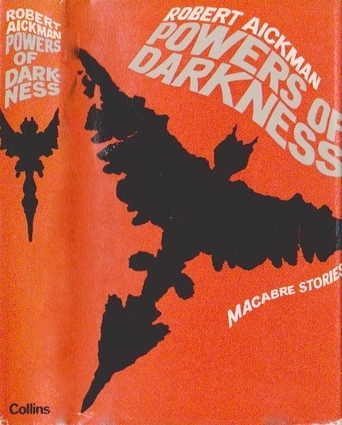 I've started reading Powers of Darkness. It's quite a slim volume. "Larger Than Oneself" is the fourth story in. I'll get to it soon.

I shall be reading it from the edition pictured in post #1.

Wish I had those! I'll be reading from The Late Breakfasters.

Online for me, I'll just have to content myself with looking at the cover posted here!

Said the Dalai Lama to the hot-dog vendor, "Make me one with everything!"

This story brought to mind a review I just read in Doug Anderson's Late Reviews of an unpublished philosophical work by Aickman entitled 'Panacea: The Synthesis of an Attitude' which runs to over 1,000 pages in manuscript. Aickman wrote it when he was in his early 20s, and the review provides a fairly detailed summary of its contents. It's a real philosophical-politcal-religious-mathematical-etc smorgasbord, and I can't help but wonder if 'Larger Than Oneself' contains an element of Aickman poking fun at his earnest younger self.

It does not appear I can access the story from the provided link, it takes me to a Google Books page but there seems to be no preview.

Google books links are problematic. They work one day but not the next. The one above didn't work for me just now until I refreshed the screen three times and it suddenly popped up.

>8 KentonSem: Same here. fiddled with it and it came up.

'Panacea: The Synthesis of an Attitude'

As much as I enjoy reading Aickman, I think I'll wait for the Centipede Press Masters of the Weird Tale: Robert Aickman volume, which I'm sure will also be about 1000 pages. The cover for it was just posted on their web site this past weekend.

I just tried refreshing repeatedly, to no apparent effect, so I guess I'm sitting this one out, unfortunately.

Also took some fiddling for me (refresh browser, scroll down & up) before the entire story became available.

References I chased down online:

Einsiedelei (mis-spelled in the online version, translated as hermitage or meditation retreat)

The subtle eroticism that is typical in Aickman's fiction is a bit more pronounced here, thanks to Patacake and Sister Nuper (did Aickman predict the likes of Madonna and Lady Gaga with the latter?). I also enjoyed the appearance of what seems to be another Aickmanesque trope: cranky waitstaff.

Wannabe-philosopher Coner's breakdown in the face of a real metaphysical event is a nice touch. The utter strangeness of the occurrence, from the all-infusing light to the "vast shining figure", successfully evokes not just the awe, but also the fear that such an event might induce. And what was it, anyway? I'm glad we're not told, but in this case, merging with something "larger than oneself" might not be such a good thing. Be careful what you wish for, in other words.

Thanks for those illuminating annotations!

This was a fun, breezy read, with the Weird elements taking a backseat to the satire and comedy. I have the distinct impression that Aickman included very specific cameos from various targets of his satire, but about which I'm simply ignorant and so the specific reference is lost on me. (For example, are Patacake and Sister Nuper meant to bring specific personages to mind?)

The general point, though, is clear enough. As noted in >6 Crypto-Willobie:, there's reason to believe Aickman is pointing fun at himself, too.

Reading my way through Powers of Darkness I had picked up, more than I had before, on the element of social comedy in Aickman's stories. (Coincidentally the commentary and extra features on the new UK Blu-ray of The Old Dark House make the same observation about James Whale's horror films for Universal, and certainly looking at The Old Dark House and having a recent reading of Aickman in mind, each man's work was usefully throwing light on the other's).

As has been noted, the social comedy in "Larger Than Oneself" plays a larger part in this story than is usual in Aickman's stories, making the dawning realisation that it runs through most (all?) of the fiction somewhat redundant.

In his introduction to the Tartarus Press edition of Powers of Darkness, Mark Valentine tells us that one of Aickman's favourite books was The New Republic by W. H. Mallock a kind of mid-Victorian update of Thomas Love Peacock's conversation novels. Valentine calls this story "a sort of mangled, chaotic anti-masque" to Mallock's book (which I haven't read, but I did spot the, a bit more than superficial, resemblance to Peacock's novels).

The names of Peacock's characters are clues to their characters. Is it significant that the main character in Aickman's story is named after the Islamic version of Satan? Perhaps holding onto her individuality, not wanting to merge with something greater, could be a rebellion against God? Is her unease around Sister Nuper and her adoring young men a fear of sex, for similar reasons? (Kenton Sem draws parallels with Madonna and Lady Gaga - I remembered the story of Tallulah Bankhead and 6 Eton schoolboys).

Ruth notes at one point that "Sin is a sense of something larger than oneself", which might provide a clue to what ultimately happens to the Forum.

Another fine touch of Aickman-humor: "Looking for an ashtray, she noticed the Sister's bedside book: entitled Bowel Discipline, it was a lesser work by a well-known member of the Labor party."

Modern pop stars because they might well adopt sexy nurse's uniform shtick, but Bankhead could well have inspired Aickman.

>15 housefulofpaper: Is it significant that the main character in Aickman's story is named after the Islamic version of Satan?

I didn't know that, appreciate the mention and it lead me to this article on Jinn. Evidently Iblis has the same complex character as does Lucifer or Satan in Christian lore, it would be a mistake to interpret the reference as simple Evil incarnate.

Just in case, thought I'd point out that the 53-minute Aickman documentary listed up under Miscellany is very good. Reggie Oliver, in particular, has some interesting things to say.

>18 KentonSem:
It is worth listening / watching, and he drops a number of recommendations along the way.

I don't recall knowing about that canals interest of his, his efforts and his writings are interesting to me, as well. Again I'm reminded of Iain Sinclair, as I was recently with another DEEP ONES read, that link to an earlier time and how it affected those who lived then, as well as affecting those who came after.

This is the third Aickman story I've read. Though I enjoyed it, I guess I'm not on Aickman's frequency. I don't want that many unanswered questions in a story.

Nuper seems to be a possibly symbolic name. Translated from the Latin, it means "recently", "newly", or "the other day". (I'm relying on online translation. I don't speak Latin.)

Here's only some of the questions that occurred to me.

Why do we have a character married, at least in her name, to the Devil? A character who sees danger in this quest for transcendence, or, at least, distaste for its result? Has the modern world birthed something to abhorrent for the Devil and his mate?

Then again, maybe something that makes the Devil’s wife recoil at its joy is a good thing.

What’s up with Nuper’s sexy nurse’s garb and reading about bowel habits? An Aickman comment on body obsessions of the modern world?

>20 RandyStafford: This seems to me to not be an entirely typical Aickman story. Most have more of an edge, are more sinister -- though of course in that hard-to-describe quiet-cubist-weird way...

And another to dust off.