THE DEEP ONES: "The Horror-Horn" by E.F. Benson

THE DEEP ONES: "The Horror-Horn" by E.F. Benson

"The Horror-Horn" by E.F. Benson

First published in the September, 1922 issue of Hutchinson's Magazine 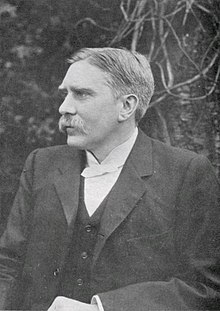 The E. F. Benson Megapack for me.

Night Terrors: The Ghost Stories of E. F. Benson for me.

It may interest someone to know that Ungeheuerhorn more literally means "Monster-Horn".

Rather glad I nominated this one.

This could be the first appearance, in popular fiction, of the yeti. The British expedition referred to at the beginning of the story, the one that reported mysterious footprints in the snow, was in 1921. Benson, of course, doesn't use the term yeti nor do his creatures match the current stereotype of yetis being tall and white furred.

I thought that Ingram's reaction to meeting a primitive human was well done, the horror of a lifeway most of humanity has escaped from. It's not only the creature's "sensual and malevolent beastiality" but there is terribleness in life itself.

I'll note that, when Ingram and the narrator deliver their reports of their encounters, it is against the height of civilization: tea-time at a Swiss mountain resort with Puccinni in the background.

Encounter stories, I believe, usually describe the yeti as dark-furred. The white version of popular culture comes perhaps from misinterpretation of "snowman" as looking like snow rather than living in snow.

It's perhaps because society has had another century to come to terms with Darwin, but I found it difficult to relate to Ingram and the narrator's extreme horror not merely at the prospect of being eaten, but at the mere existence of the ape-men.

The concerns and anxieties below the surface of the narrative do seem those of a Victorian still processing the implications of Darwin, as well as dealing with what WWI revealed about human nature and human civilisation and progress.

I wondered if this story was "in the style of" Algernon Blackwood but I gather Benson was a keen athlete (including skiing) and the setting and details of skiing in the Alps would have been familiar to him personally.

The details of the ape-woman's dismemberment of the chamois was surprisingly gory - Benson is certainly a less reticent about such things than M. R. James, for example.

>7 AndreasJ: With all the Fortean Times issues I've read, I should have remembered that.

I liked this one, too. I'm not en afficionado of yeti or bigfoot tales, but the setting was unusual and the verisimilitude of the story is arresting: the locale, the ready familiarity with mountaineering terms and skill.

It appears the Engadine has been invaded by another monstrosity of late:
https://www.nytimes.com/2010/05/09/travel/09next.html

Benson perhaps missed a trick in not working in any mention of sgraffiti or "Centuries-old stone dwellings with mysterious renderings of wild men and mountain goats ... etched into white facades."

I was reminded of Leiber's Fafhrd & Gray Mouser tale, "Stardock" for its setting of a mountainous ascent.

>6 RandyStafford: the horror of a lifeway most of humanity has escaped from ... terribleness in life itself.

I had the impression Benson described a species of the uncanny valley, that gazing on something so human and yet so alien created a special kind of terror.

In The Handbook of the Gothic there is an entry for "Horror" by Fred Botting which goes back to Edmund Burke to elucidate the difference between horror and terror. Terror is linked to awe and wonderment and is linked to the ideas of the sublime. Horror, on the other hand, is "of a quite different order of emotions"..."Bound up with feelings of revulsion, disgust and loathing, horror induces states of shuddering or paralysis". The essay goes on to probe the roots of horror in the challenge to an individual's sense of self/sense of identity presented by death, decay, the animal and sexual nature of the human (moving on from Burke to Freud and post-Freudian thinkers),the uncanny; and, in what I suppose you could call a metaphorical sense, the familiarity of the challenge presented by the doppelgänger, the vampire, the ghost - "the ghost eases the limit which exists between two states, neither alive nor dead" (Helen Cixous). In fact, it's the crossing or blurring of boundaries that, as Botting argues, "connects horror and the uncanny in much later nineteenth-century fiction".

And then he uses Ingram's encounter with the ape man as an example of this particular horror, of the crossing of boundaries between man and beast. it is "a being that refuses to remain in a symbolically established place and, shifting between animal and human features, confounds what should be a definite and absolute distinction.".

I think this analysis complements the Death of God/Darwinism and uncanny valley suggestions advanced above, and doesn't contradict them.

By the way, it occurred to me that the setting of this story, the Alps, were a source of sublime terror to the 18th century Romantic intellectuals who went on pilgrimage to them.

Botting's discussion is just the sort of thing I eat up, thanks for posting.

Your note about the Alps as a source of the sublime is also appreciated. The classic Friedrich painting "Der Wanderer über dem Nebelmeer", came to mind -- I think we've referenced it before in DEEP ONES.