THE DEEP ONES: "The Door to Saturn" by Clark Ashton Smith

THE DEEP ONES: "The Door to Saturn" by Clark Ashton Smith

"The Door to Saturn" by Clark Ashton Smith

First published in the January 1932 issue of Strange Tales of Mystery and Terror. 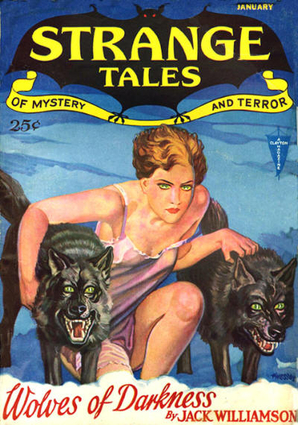 But, unlike most peoples, they did not regard their current stage of development with unqualified complacency.

CAS very justifiably considered it one of his best. From a more mythographical perspective, it's noteworthy as the only one that features Eibon as a character, rather than invoked as the author of his celebrated book.

Morghi is remarkably quick to accept Eibon's word that there's no way back to Earth. One might have thought he'd think it a transparent attempt to avoid immediate attack.

I re-read this with a recent viewing of Lucio Fulci's The Beyond in my mind (wherein The Book of Eibon drives the haunted house/Zombie/doorways to Hell plot) and an even more recent reading of Smith's "Captain Volmar" Science Fantasy stories from around the same time.

It's striking, after the book appeared as a baleful stand-in for the Necronomicon, to see the author himself cut down to size in Smith's story. In fact I got more than a whiff of middle class (or professional class) British sitcom, or mid-20th century comedy acting, from him and Morghi, once they had been forced to team up in their self-imposed exile.Mainly I suppose in their efforts to maintain a "front" and status, but also when sex makes an appearance in the story, or specifically the fear of/distaste for sex with the 'National Mother". It's all of a piece with the sardonic side of Smith's personality that this part of the story takes a turn into farce territory.

Reading this story just after all the Volmar stories brought home the similarity in the plots - trapped on a planet, a great deal of description of the weird flora and fauna, capture and escape with a very linear storytelling. It's often a literal road movie scenario - walk over the horizon into the next scene (it struck me the the description of the door's operation is very like the TARDIS, so maybe "The Door to Saturn" is Science Fantasy too, and not simply Fantasy or weird fiction).

Of course one difference here is that, unlike Volmar and his crew, Eibon and Morghi don't escape, but they don't do too badly in the end. And this ending seems to anticipate a counter-cultural, stoner kind of road movie - indeed I found an online comment suggesting, not the British acting style i had in mind, but casting Cheech and Chong as the magicians.

I have to confess that one thing the story couldn't conjure up was a sense of wonder - the conception of Saturn is just too far from what we now know, and the Science Fantasy imagery is now nearly ninety years older than when this came off Smith's typewriter. It does leave the plotting and the more exposed than they ought to be perhaps, like rocks at low tide.

A final thought. Was it all engineered by Zhothaqquah to revive his worship at the expense of Yhoundeh? Playing the long game, and not really taking care of his disciples.

Even in 1930 (the story was published only two years after composition), of course, this was a thoroughly implausible depiction of Saturn. I did like, though, the nods toward astronomy in the description of the rings and the smaller Sun.