THE DEEP ONES: "The Essayist in the Wilderness" by William Browning Spencer

THE DEEP ONES: "The Essayist in the Wilderness" by William Browning Spencer

"The Essayist in the Wilderness" by William Browning Spencer

First published in the May 2002 issue of Fantasy and Science Fiction magazine. 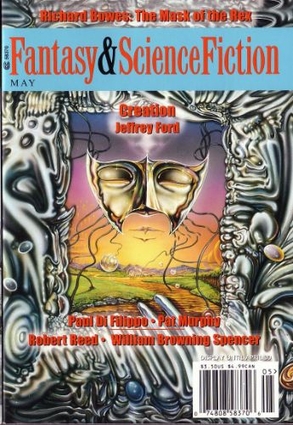 The Ocean and All Its Devices
New Cthulhu: The Recent Weird

I've got this in New Cthulhu: The Recent Weird.

I really enjoyed the dark hilarity in this story, from "I marked my place and rushed to her aid" when Audrey has an attack and falls to the floor to the Earth-is-not-enough observations like "Nature's infinite variety was beginning to look like a rut". At the same time, there are steadily increasing background alarms for Lovecraftians like Audrey's mad scribblings and the weird droning heard in the clearing. We know what's going on! Bits like Audrey's shaved eyebrows and the old ball-of-string (aka breadcrumbs) trick are fun add-ons. Good stuff.

It was certainly funny. The speaker is so unfathomably clueless! He reminded me a little of a down-market version of DeLillo's protagonist in White Noise.

I don't know if it was the comic tone or something more fundamental that made me feel like the story was a little hollow, though. All of the phenomena were recognizably weird, but they didn't seem to add up into symptoms of a greater strangeness. I had trouble detecting an alien logic or even the succinct violation of human reason.

On reflection, Audrey's parting note did sound as if she were clued-in somehow. Certainly she believed she was. Could the gnosis she shared with Dr. and Mrs. Bath have been transmitted by the glowing venom, communicated from one of the smaller "crayfish"? These were no doubt the agents of Bob's demise.

The eyeball garden might have been a bit much, and the giant crayfish somehow couldn't help but remind me of Divine's encounter with a giant lobster in Multiple Maniacs. Such things did decrease the overall fear factor, but I remained amused - and entertained - overall.

I think I nominated this story (a while ago). I remember that the narrative voice stood out from the other stories in The New Cthulhu: the Recent Weird. On that first reading it seemed more British than American - in that the educated but unworldly narrator felt like a character=type I'd encountered in a great deal of British television and comedy over the years (I have to admit to not being well-read in comic novels, but I suspect that there may be parallels, and maybe better ones, there as well).

On a second reading (and with the benefit of the excellent interview linked in the miscellany n >1 KentonSem:, I believe I was able to approach it more on its own terms and without those distracting Anglocentric echoes.

I still, on this second reading, enjoyed it a lot. Ruefully, I saw a lot of myself in the narrator - although he has a better turn of phrase than I do.

I would say the story is a comedy because of the way the plot is structured, rather than being humorous solely due to the narrative voice, or the narrator's foolish, self-absorbed, or ill-judged actions alone. And that's despite the fact that it apparently describes the beginning of the end of the world/an alien invasion/ the return of the Great Old Ones. The plot turns, of course, on Ackermann being prevented from providing sufficient information about real crayfish before being forced to terminate the phone call. Bad luck + character flaws = comedy.

>5 paradoxosalpha:
I thought there were intentional parallels between Audrey's writing and the observed behaviour of the "crayfish". I thought there were enough clues hinting at an alien reproductive cycle and dissolution of the individual into a gestalt or hive mind. And I took it as read that she had been infected by the aliens.

The fact that the unearthly nature of the infection and the "crayfish" was cleverly lampshaded, I thought. Not just by the narrator's bookishness but his statement that "I expect this ritual has been observed by countless generations of country boys who give it no more thought than they might give to the birth of a calf"... It's true, there's a lot of perfectly normal nature that can puzzle or even alarm the unwary city-dweller or townie.

I quite liked this gem of a story, a rare combination of both humor and horror though I do agree a bit with >5 paradoxosalpha: in that the narrator's obliviousness and pretensions mute the horror a bit. It's quite a change from the usual final conclusions of narrators in weird tales. They usually know the portent of what they've seen. The narrator here still doesn't recognize he's truly seen something truly unearthly and horrific. Given his abyssal knowledge of nature, it's a little hard to take any of his conclusions seriously.

>4 KentonSem: Yes that was one of my favorite moments too.

The Baths interest me. Their diction is strange for having such an Anglo-Saxon last name. (I also liked the humor of them making a fast back by selling the paperback of Annie Dillard essays.