THE DEEP ONES: "This Is Not for You" by Gemma Files

THE DEEP ONES: "This Is Not for You" by Gemma Files

"This Is Not for You" by Gemma Files

First published in the October 2014 online edition of Nightmare Magazine. 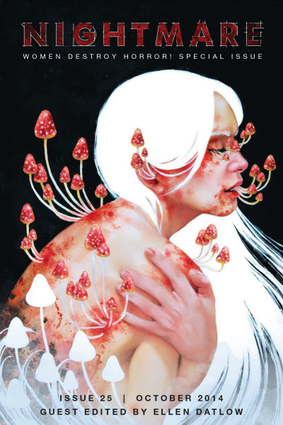 The Best Horror of the Year: Volume Seven

The bit about Charis was hard not to read as a shot in the intrafeminist debate over transsexuality.

That aside, from a mythological perspective the absence of Dionysos seems a little odd. Is there classical precedent for maenads not associated with him?

>2 AndreasJ: the absence of Dionysos seems a little odd

I agree. They're not exactly reconstructionists, and their feminism seems to have determined that they'd focus on Persephone rather than Bromios. The cult is a hybrid of Eleusinian and Bacchic mysteries, with perhaps a bit more of the former, aside from the actual sparagmos business.

This story reminded me a great deal of Aleister Crowley's Golden Twigs (also collected in The Simon Iff Stories and Other Works), especially "The Stone of Cybele." Crowley was riffing on episodes and themes from The Golden Bough by Frazer, and that story featured a Victorian cult reviving "The Myth and Ritual of Attis" with ether binges and priestly self-castration.

It occurs to me that witnessing Gorgo's possession experience may have supplied Aglaia with the fortitude she needed in order to condemn her son. The irony is that Phoibe's attempted coup actually engineered Aglaia's final and absolute investiture with authority over the maenads. Not only would they be fully convinced of her right to lead them, but she would be irrevocably committed to doing so.

From the Annals of Serendipitous Reading: I'm making my way through Gaiman's Sandman series, and "This Is Not For You" evoked two episodes. The early storyline on the Serial Killer Convention ("Collectors" in volume 2 of the TPB edition) linked to the subtheme on female serial killers. A cameo of the Maenad (from "Song of Orpheus: Chapter Four" in volume 6) served almost as an illustration of this story.

I appreciated the seeming historical veracity of Files's descriptions and terms: thyrsus / thyrsi, sparagmos, kykeon, and the various translations of the poem (from the Bacchae?).

The decision to structure the story as a nested flashback was exceedingly effective, putting the history of the group between the start of the ritual hunt, and the end of it. It extended the dramatic effect of the hunt, and then the tension of Aglaia's son; and it also brought in the necessary background to better appreciate specific interactions among the acolytes.

I had a bit of nice disorientation when the story opened. I wondered if we were reading an account from history or some post-apocalyptic retreat to the primitive.

I'm not sure if I've previously raised here my observation - or maybe its just a hunch - that modern genre fiction that is very roughly in the "action/adventure/suspense" camp (and I would include horror and weird in that, but probably not the "classic ghost story") has defaulted to a tough guy, hard-boiled narrative voice. I have to confess to finding it a bit overfamiliar sometimes. It might be one reason why I was drawn to the William Spencer Browning story recently.

So, I did have a little bit of a feeling of "here we go again" when I started reading this story. But then I thought about it. Is Gemma Files playing with these conventions? Not only because the narrator is a woman (when the vast majority of the protagonists of these tales are male) but far more to the point, she is a psychopath. Is it in part a comment on all those detached, quickly appraising a situation and making judgements, not afraid to use violence, protagonists?

It didn't occur to me when reading the story, but yes, I could see that as a deliberate comment on tough-guy protagonists.

Relatedly, at some point in recent decades the default weird story protagonist seems to've gone from wealthy bachelor to a more working class sort of guy, at least in stories with contemporary settings.

Nicely observed. I hadn't put together that trend, even after dipping into many of the original noir stories in the past few years. Intentional or not, it's a fun take on the character.