THE DEEP ONES: "Facts Concerning the Late Arthur Jermyn and His Family" by H.P. Lovecraft

THE DEEP ONES: "Facts Concerning the Late Arthur Jermyn and His Family" by H.P. Lovecraft

"Facts Concerning the Late Arthur Jermyn and His Family" by H.P. Lovecraft

First published in the March 1921 issue of The Wolverine. 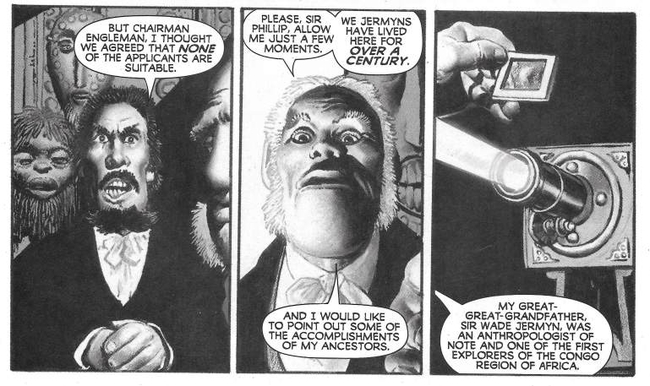 Dagon and Other Macabre Tales
The Call of Cthulhu and Other Weird Stories
H.P. Lovecraft: The Complete Fiction
H. P. Lovecraft: Masters of the Weird Tale

I thought for sure it was in Creepy Presents Richard Corben, but it turns out to have been in the comic book Haunt of Horror: H. P. Lovecraft #3. Think I'll dig it out.

My copy of Dagon and Other Macabre Tales for me, with a glance back at that second link for the reproduced picture in Weird Tales where published under the title "The White Ape".

Read this one out of Klinger's The New Annotated H. P. Lovecraft: Beyond Arkham.

housefulofpaper here, in my other account and on my phone. Read this in the Folio Society special edition of The Call of Cthulhu & Other Weird Stories.

Well, if one wants to comment on racist and classist themes in Lovecraft, this story offers some material.

The opening words pre-echo the opening of "The Call of Cthulhu". I find it a bit hard, though, to relate to the narratorial voice's being horrified not only by Sir Arthur's recent non-human ancestry, but apparently by the kinship of human and ape in general. You'll recall I made a similar remark regarding "The Horror-Horn".

It had been a while since I'd read this one. It's a good example of Lovecraft being a suspense writer in that the reader is way ahead of the protagonist in knowing the awful truth. I liked it, but it's minor Lovecraft.

Coincidentally, I just got into the "Apes and Superhumans" section of Brian Stableford's The Plurality of Imaginary Worlds. Evidently French sf had all kinds of stories dealing with apes (sometimes with miscegenation with humans) in the 1920s and 1930s. And, of course we did have "The Horror-Horn" and King Kong from around then.

I thought it interesting how many Jermyns married "low class" women (dancers and entertainers), so there's a theme of weakening aristocratic blood as well as miscegenation. Not that it seems to hurt Arthur Jermyn's intellect.

Evidently French sf had all kinds of stories dealing with apes (sometimes with miscegenation with humans) in the 1920s and 1930s.

Not to mention all the way up to Boulle's Planet of the Apes.

Here are a couple of pages from H.P. Lovecraft's Haunt of Horror #3. 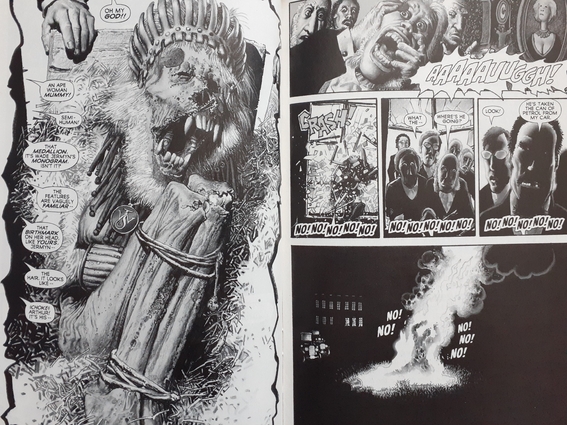 You can point to several Lovecraftian themes making a relatively early appearance here. To those already listed I'd add Arthur Jermyn as the (usually doomed) poetic soul, trapped in or coming to grief by way of misfortune or heredity, or simply by being born in the wrong time. The subterranean tunnels of the white apes city is followed by many more dizzying underground caverns, catacombs, cities and whole civilisations.

S. T. Joshi's story notes point out that Lovecraft was drawing on his family's reduced circumstances, and his negative self-image, (and his poetic character?) in creating Arthur Jermyn. However, rather than seeing the story as especially personal or confessional, Lovecraft stated in correspondence that the spur to writing the story was exasperation with the likes of Winesburg, Ohio ("tame backstairs gossip"). He decided to "devise some secret behind a man's ancestry which would make the worst of Anderson's disclosures sound like the annual report of a Sabbath school." Of course, what Lovecraft selected as a suitably shocking secret is of itself revealing (also, given the cliché that all fiction is autobiographical, maybe a young(ish) writer is less able to disguise that fact and, whether the work is heavy or light, heartfelt or written to a market, unconscious revelations will be made).

Like AndreasJ I am not bothered by the fact of my or anybody else's non-human ancestry (that said, I presume forebears going back four generations were fully human!). What that side-steps is the conflation of class, race, and species, that underpins and runs right through the story.

But if it is the implications of Lovecraft's thinking on this subject that if not horrifies in a scary sense, then repels, there is another way of looking at the story.

Iif Arthur Jermyn feared his mind, his intellect, and his character, could be lost due to his "tainted blood", that is truly horrifying - the loss of personal identity is a theme of horror and science fiction running right through the 20th century.

I'm sure Lovecraft would have considered he's revisited the theme in deeper and more developed way with The Shadow over Innsmouth. Of course that story has recently been given revisionist readings (pro- Deep Ones, anti-concentration camps and genocide, you could say).

I had very strong memories of reading a Doctor Strange story in the '70s (a British reprint of "The Spawn of Sligguth", originally published in Marvel Premiere No. 4) that is in essence a retelling of The Shadow over Innsmouth, but for the replacement of fish-men with reptile-men. There's no credit given to Lovecraft (I immediately recognised the resemblance when I finally read Innsmouth in 1999 or so). Rather, the story "Featur{es} Concepts Created by: Robert E. Howard".

The impact of the story was all the stronger for my not seeing its conclusion until decades later. Ethan Stoddard's (the analogue to Innsmouth's narrator) succumbing to his reptile-man inheritance was part of my mental furniture from when I was 7 or 8 years old. I think "Atavism" is the 19th century word I'm looking for to describe this "succumbing". So yes, that loss of self is (still) horrible and thankfully not predicated on outmoded racial ideas.

>10 housefulofpaper: It's very likely there is some of Lovecraft's personal anxiety in this story. It's not just the tainted ancestry (I can't research right now whether Lovecraft knew his father died insane and his mother wasn't dead yet). It's the reduction in family fortune, and Lovecraft's own looks. Remember his mother said he was hideous. Jermyn is odd looking too and poetical like Lovecraft.

I think the sense that we are somehow tainted in our basic makeup is a relatively common belief when we think about our inability to achieve our goals and how those failings are basic to our nature, even our biology. (However, I could be projecting since I'm a strong hereditarian when it comes to these matters and tend to think of innate biological limitations.) And I'd also add that this story goes way beyond merely being aggrieved about our innate limitations.

Jermyn torches himself out of, basically, shame. There's no indication that his ape ancestry has lessened his intellect. It hasn't given him some fatal disease. In other words, it hasn't really made him maladaptive to the 20th century (except possibly in finding someone to procreate with).

In a sense, with paleogenetics, most of us are "tainted" with Neanderthal or Denisovan ancestry. Lovecraft, of course, didn't know that. But Jermyn's reaction as a modern man, who presumably accepts evolution, is a bit curious. His non-human ancestry hasn't hurt him. It's just more recent in his bloodline.

It's interesting that the Jermyns are all odd, but some are so in a brutish, "ape-like" way, while some like Arthur are scholarly types. On the mental side, at least, there doesn't seem to be much consistency in how the genetic "taint" manifests (except perhaps as a tendency to suicidal violence).

Coming around to this late. Strong commentary on the race / class themes, as well as Lovecraftian preoccupations like catacombs and lost cities. I found the specific link to Anderson's Winesburg stories quite fun, actually!

Regarding Arthur's decision for self-immolation, this supports the "shame" idea in >11 RandyStafford:, but I'd note that part of the concern could be with the behavior presumably accompanying the marriage of humans and "white apes". That is, it's not merely that they had children, but the implication of violence attendant on the worship and ritual. Interestingly, the specific references are to keeping the Jermyn wives in captivity, with the humans dominating the apes. This reverses much of other Lovecraftian ideas in which humans are dominated by the other race.

I think this story might be rooted in Lovecraft's racism more profoundly than we realised last year.

There was a theory (polygenesis or polygenism), which was demolished by Darwin's The Descent of Man 150 years ago, but that still had adherents into the 20th century. * This posited that the various human "races" were descended from different ape ancestors, in examples of parallel evolution occurring (roughly) on each continent.

So with that thinking, the word "race" would be taken at its face value and humans of white European stock would be different animals from, well, the rest of humanity. And, since this was a theory latched onto by racists, white Europeans would be superior.

Given what's known about Lovecraft's feelings on race, especially where he expresses himself in private correspondence, I can't help but feel that Lovecraft subscribed to the theory of polygenesis.

You can see where this is going. The horror in this story isn't the horror of Darwinian descent as such, it's the white racist's horror of "mixing".

* Just the Nazis, at the end, but look at the Wikipedia entry on "De Loy's Ape" for details of an attempt to prove (or rather to fake) an American "missing link" as late as 1929.