THE DEEP ONES: "The Bells of Horror" by Henry Kuttner

THE DEEP ONES: "The Bells of Horror" by Henry Kuttner

"The Bells of Horror" by Henry Kuttner

First published in the April 1939 issue of Strange Stories. 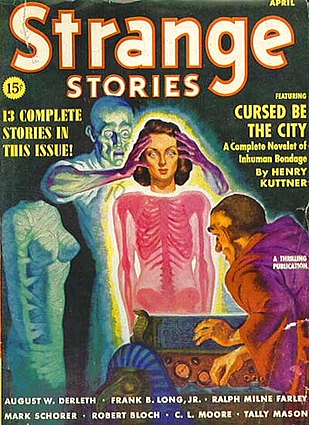 Tales of the Lovecraft Mythos
Terror in the House: The Early Kuttner, Volume One
The Book of Iod

Tales of the Lovecraft Mythos for me.

Kuttner had two stories in that issue of Amazing? The cover lists also the "novelet", "Cursed Be The City".

Terror in the House: The Early Kuttner, Volume One for me.

I'm not sure what's actually happening on that cover, but it must have something to do with inhuman bondage. By the way, here is the even more frightening back cover: 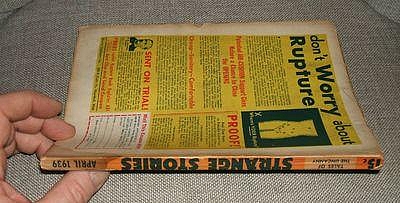 "Something in the vibration of those bells is blanketing the sun's light-waves. For light's a vibration, you know."
This surmise from Denton wasn't exactly "nonsense" (as Todd called it), but it's certainly a "scientific" explanation more suited to the 19th century than 1939.

I thought the little scene with the toad was pretty ghastly, and I liked the whole eye-compulsion thing. But Todd's fate was in no way surprising, and the italicization in the final sentence made it even more underwhelming.

Zushakon was a pleasantly novel Old One; I've never encountered it before.

The one uses the typical Lovecraft story. Kuttner fails to pull off the surprise ending (Lovecraft failed in his concluding "surprises" sometimes too).

I liked a couple of things about this story.

I also liked the bit with the toad rubbing its eyes out and Zushakon's urging people to gouge their eyes out. I wondered if it was some kind of homage to Clark Ashton Smith's earlier "The Dweller in the Gulf".

I also liked the way Kuttner used his dark and cold. A lot of stories will mention gloom and chilly air as a way to create a particular atmosphere. Here, those two things are brought into the world by Zushakon. They are not atmospheric background but foregrounded as crucial elements of hte plot.

Unlike the gentlemen adventurers of last week's story, the characters here had a reason to be involved in the action. The eye/blindness motif running through was effective (Especially now. With unusually low relative humidity and a high pollen count, I was experiencing the same symptoms!). The cold too, in contrast to the usual Califiornian climate.

On the downside, if it had these features of a professional piece of work, it also lacked any real feeling of individual wayward genius or a strikingly individual voice.

I agree that it has its moments. The sequence with the toad is especially macabre and unnatural. Interesting also that Zushakon is a kind of hometown Old One, in that its origin is strictly planet Earth-based.

This is early Kuttner, so I'm willing to cut him some slack as far as the pacing and lack of much surprise in the latter half. Even so, I can't remember reading a Kuttner tale that was a real knockout. I was hoping that this one would have become even crazier, with massive eye casualties and more and bigger bells being created. Make it a worldwide event!