THE DEEP ONES: "The Detective of Dreams" by Gene Wolfe

THE DEEP ONES: "The Detective of Dreams" by Gene Wolfe

"The Detective of Dreams by Gene Wolfe 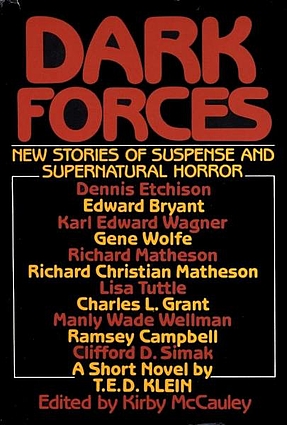 Dark Forces
The Best of Gene Wolfe: A Definitive Retrospective of His Finest Short Fiction
The Fantasy Hall of Fame
The Night Fantastic
Endangered Species

I'll be reading from Dark Forces, probably my favorite anthology, ever.

>2 KentonSem: Dark Forces for me as well.

I'd planned to get this from my local, way back when. I head the Chicago system is gearing up to re-open (in some capacity), but no dates and no details. I'm still not motivated to learn the eBook checkout, though I believe that's available. Probably I will lurk and see what everyone else thinks!

>1 KentonSem: This one can also found in Wolfe's Endangered Species collection.

Noted, and added above.

Found it online, if anyone needs it. See above.

I enjoyed the simulation of the 19th century detective tale and especially the obscure, circular nature of the investigation. The solution to the riddle was unexpected, although I generally prefer it when the protagonist is the one being metaphorically consumed. I could never finish this tale in Dark Forces. It always seemed like it didn't belong. I still think so, but I'm glad I finally finished it!

Wolfe's Catholicism is a matter of common knowledge often invoked in criticism of his work, but I've never seen him put it over the top to this degree!

I'm in the process of completing a full read of the "prophecies" of William Blake. In the later ones (Milton and Jerusalem) he takes a turn toward Christian piety, despite his earlier contempt for it. But Blake understands "Jesus" as the articulate form of the human imagination, inspiring true conscience and forgiveness. It's remarkably in line with what Wolfe seems to be driving at here, although I've never noticed allusions to Blake in the other Wolfe I've read. Perhaps I'll catch them now that I've been alerted. I do plan to return to the Solar Cycle--maybe as soon as I've finished Against the Day.

I'm not a Wolfe fan, and I found this story neither horrifying or weird.

>10 KentonSem: I agree. It doesn't belong in that book.

It's not exactly an allegory since the correspondences are not consistent and one to one, but the meaning is pretty clear with that last paragraph.

I found a lot of allusions to biblical passages, but I wasn't able to quite figure out the allusions and symbolism of A's dream.

She weeps at not being allowed to stay with the Dream-Master. I think her fault lies in not allowing more intimate contact with people. She self-admittedly doesn’t like people. She gets part way, through a straight and narrow way, to Christ, the master of the house (Matthew 7:14). Perhaps the banquet is a reference to the parable of the ten virgins awaiting a bridegroom where only some are ready for him (Matthew 25:1-12). Her sin maybe in not following the etiquette at that banquet and accepting Christ all the way or not appearing naked since much is made of her dress. Being “born again” after getting salvation is to be born naked (John 3:3-6). However, none of the other guests are naked.

As an aside, I read this out of the kindle edition of Dark Forces. It threw in a few paragraphs of the next story at the end of Wolfe's before putting in the story's title. I was rather perplexed for a few seconds.

I found the reveal the least confusing part of the story.

The Countess' dream with the execution inevitably made me think of the crucifixion.

But where I could see A_ being punished for being asocial, and R_ getting a dose of his own medicine re calling in debts, what's the Countess' sin? Being married to bad man presumably doesn't count in a setting were the choice presumably wasn't hers.

I get the impression that the Countess has been agreeable to other executions in the past, ones not conducted in the garden, and this is the first one that has given her qualms.

It occurred to me that Herr D_ might well have received his own visit from the Dream-Master. Heading the secret police is bound to involve some work troubling to the conscience.

>14 AndreasJ: I interpreted the Countess' dream less in terms of a sin that talking about the idea of a spark of divinity in all men. The Countess' husband seems more real reflected in the Dream-Master's eyes than he seems in the flesh.

Or it could be the Dream-Master has more humanity and is closer to what humans should be because he's not executing people. Something has been diminished in the Count compared to the embodied ideal in the Dream-Master.

I would have had this if I'd read it just a few years ago. I would have felt that a sermon had been smuggled into my reading material against my wishes and my hackles would have risen.

And yet, the Weird isn't a sphere entirely separate from Christian morality, many stories even taking place in a framework that explicitly allows for the existence of Heaven and Hell, Angels and Demons.

Knowing that Wolfe is a Catholic and that this comes out in his work, plus the introduction in Dark Forces, I was "on my guard" and the true identity of the Dream-Master was clear no later than the end of R-'s tale.

Although I agree that it doesn't feel like a story that belongs in a collection of "tales of supernatural horror", no doubt the odds could not be greater than the risk of eternal damnation.

Like a couple of other readers, I struggled to see exactly what all these people were doing wrong - what sins they were committing, I guess - (well. R- is pretty clearly not showing mercy when he's been granted it himself). It brings me back to the discussion of Flannery O'Connor's story- it's ll very well saying the reader should bring their own insights to a story, but if you don't share the cultural background or specialist knowledge, you're just not going to "get it".

(Edited to correct for awful typing!)

As a non-Christian myself (albeit one fairly well-read about Catholic history and teachings), I found this story curiously plausible, even as its 19th-century detective pastiche framing kept far from a naturalistic style. In countries where Catholicism was routine element of popular education, it could well manifest psychologically just like this!

Edited to add: While I don't agree with August Derleth that HPL's "Cthulhu Mythos" is a merely cosmetic makeover of Judeo-Christian theomachy, I also don't think that the gap is very wide or impermeable between weird horror and religious pericopes. Tierney's Drums of Chaos makes hay of this sympathetic relationship by foregrounding the quasi-Christian subtexts of "The Dunwich Horror" in the setting of first-century Palestine! And for my money, Robert M. Price's background in biblical scholarship is what has always made him one of the most insightful interpreters of weird horror.

And for my money, Robert M. Price's background in biblical scholarship is what has always made him one of the most insightful interpreters of weird horror.

I would agree with that! Which reminds me - I could swear I was digging through a bunch of his Crypt of Cthulhu columns somewhere online. Can't seem to find them now. His web site has plenty of interest, though, including a number of short stories we might want to delve into.

There's a partial online repository of older Crypt of Cthulhu stuff at http://www.hplovecraft.com/study/periodicals/cc.aspx.

That was it - thanks!

Coming to this late, and enjoying the comments already offered. I've not read too much of Wolfe: a few years ago read the first three of Wolfe's The Book of the New Sun. It was then I learned of his Catholic faith, though I didn't recall that when starting this story. I liked this story very much, more in fact than my foray into his Solar Cycle.

I did not recognise the Biblical parallels among the story interviewees, apart from the broad outline of the hypocrite moneylender. But it seemed clear there were allusions to be discovered, which I did expect from my other reading. In retrospect, the crown of roses should have been glaringly obvious, but I was rather seeing it as part of fin de siecle Austro-Hungarian Empire.

I was briefly motivated to attempt pinning down the "prior cases" at which the narrator hints. (I had no luck, and spent little time in my attempt.) The three cases numbered in the opening pages, interviewing Herr D---; at least one other, the "matter of a certain mummy", relayed in the interview with Herr R---. I wondered if they were published stories, akin to a series a la Sherlock Holmes. Of course, it is enough to mention them to raise that comparison, and assume that was Wolfe's intent in the pastiche.

I have not read Dark Forces but I find this tale fits perfectly well into any collection of supernatural horror. That Wolfe is Catholic, to my mind, primarily speaks to his own clear-eyed look at his subject matter than any dilution of the genre. The reference to Flannery O'Connor in >17 housefulofpaper: is apt.