THE DEEP ONES: "The Fungal Stain" by W.H. Pugmire

THE DEEP ONES: "The Fungal Stain" by W.H. Pugmire

"The Fungal Stain" by W.H. Pugmire 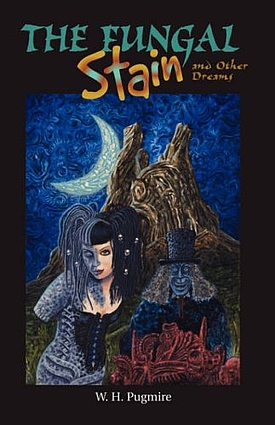 New Cthulhu for me.

I'll be sitting this one out, not owning either print version and being rather too preoccupied elsewise to go get a copy, but I thought I'd mention I'd missed Pugmire's passing last year. I think he's the first person I've had any interaction with on LT to pass away. Sad.

That’s only partially true, here as the protagonist is seduced by the mysterious woman but, at the end, vainly tries to escape his surreal fate, rather than melting into a kind of Liebestod with her or the dark forces she embodies.

I listened to the interview in >1 KentonSem: and noted Wilum’s stated devotion to Oscar Wilde. I wouldn’t have picked up on that from this story. There are suggestions of the 1890’s more generally - the woman is a version of Helen Vaughan from Machen’s The Great God Pan (but also more generally a Vamp, a Temptress) - but at several removes from their originals, I felt. This is, I don’t know, Aubrey Beardsley’s drawings filtered through a century of American Underground culture, in particular the Beats and Punk/New Wave.

Curiously, in the second section, which is essentially given over to a long speech by Winfield Scot,
I thought I detected the ghost of Ray Bradbury’s kind of free-wheeling, rapturous prose style. But it was only in that section. It made for a slightly bumpy read. I may as well admit that I don’t find Wilum quite the supreme prose stylist that he’s described as in some quarters. The use of the occasional British English word rings false rather than suggesting a..what, actually? The Café Royal circa 1895?A King’s Road Punk? It never seems to be either used to suggest character, or as an authorial voice separate from Wilum’s characters (I’m talking beyond just this one story, now). It’s just something Wilum does, that his characters do.

It’s a brave choice to pastiche Baudelaire, or a Baudelairean poet, given his status as a supremely skilled user of the French language - but the fact that (we’re told) an English translation can never be as good as the original, takes the heat off, somewhat. The fragment of Justin Geoffrey’s work (I haven’t checked if it’s all Wilum, or some (or all) by Lovecraft) does have the rhythm of Baudelaire in translation.

I do find updated versions of Lovecraftian locales an interesting aspect of Mythos stories by later hands than Lovecraft’s - Miskatonic University in the Hippie era and so on - so a look into Kingsport’s bohemian quarter was a point in the story’s favour for me.

The old accordion player and his companion are strikingly weird and menacing but don’t play much of a role in the story. This sounds mean, perhaps, but they could almost be characters in a ’90’s music video for a particular kind of alternative rock band.

Oh, and for me, perhaps the most terrible thing in the tale is right at the start - a naked flame in a “cramped” bookshop? - the horror!

>4 housefulofpaper: Oh, and for me, perhaps the most terrible thing in the tale is right at the start - a naked flame in a “cramped” bookshop? - the horror!

So true! And it confused me about the intended time-frame. Surely it must be prior to electrification, then? But the characters' diction is relatively contemporary.

In regards to setting, I thought the idea of Kingsport as being a place with some magical power that could be drawn up by the alchemy of language was interesting.

Enoch and his masks on the wall were nicely weird, but we don't learn why Enoch has them. Has he just surrendered to the idea that Yuggothians walk around Kingsport? Is he in league with them?

Pugmire using a brief aside in Lovecraft's story was a point in favor of this work.

Winfield suggests that old Enoch somehow summoned the woman, which might explain why she is usually found in his vicinity. The masks on the wall in his quarters - is she actually living with him? Are those summoning glyphs on the walls? The woman seems to orally introduce the fungous growth to the narrator's face. Did she do the same to Enoch and then proceed to take a bite in the courtyard scene? Pretty gruesome, but why?

Wilum always made no bones about his feeling out of place in time (rather akin to HPL), and feeling more like he belonged to the fin-de-siècle era, specifically. When I read his stories, I often feel that Wilum himself has literally entered into and is experiencing his tales as he tells them, almost like an instance of automatic writing.