THE DEEP ONES: "The Prayer of Ninety Cats" by Caitlín R. Kiernan

THE DEEP ONES: "The Prayer of Ninety Cats" by Caitlín R. Kiernan

"The Prayer of Ninety Cats" by Caitlín R. Kiernan

First published in the Spring 2013 issue of Subterranean. 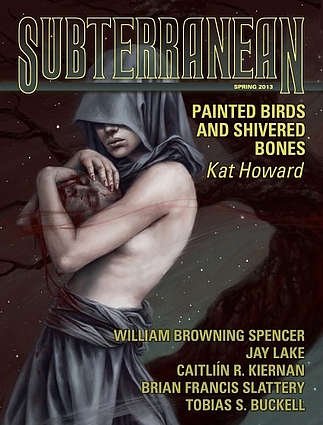 Online for me too.

Writing a story in the 2nd person is unusual enough - telling it at a further remove as the reader's experience of a movie is not something I think I've come across at all before.

The history of Čachtice/Csejte (Slovak/Hungarian) Castle appears to be essentially correct, though if it ever belonged to Rudolf II it must have done so before he became Holy Roman Emperor in 1576.

The curious narrative voice and POV didn't work for me, at least not immediately. There was too much about it (word choice, perhaps, or smugness) that called attention to the author, I felt. But it certainly worked for me by the end, and I wonder if I'd circled back and re-read the beginning, if I wouldn't find that it worked at the beginning, too. That I needed to accustom myself to it before it worked.

I think I'd enjoy the film, actually! I've seen some that were alluded to at the beginning, but not others. Want to look them up. (Kaufman's Synecdoche, New York for example.)

Near the end I was reminded of The King In Yellow. Not for the madness, I didn't pick up anything of that in the story about the film. But as parallel to whatever the Play could be said to provide in the way of reportage. A glimpse into another time, another place.

I had an exactly parallel experience to that described by >4 elenchus:

The opening "pages" (scrolling online is a sub-optimal reading experience) were clunky and affected, but the story matured, and by the end I was appreciating the snarky asides regarding the reader/moviegoer's critical knowledge about the production of the film.

Part of the jauniste angle is the theatricality, the imposition of a proscenium that arrests the attention and subverts awareness.

The structure is striking for how many deliberate layers it provides, with multiple time frames and perspectives. Some that I identified:

Narrator describing cinema in the moment: "the theatre air is musty"
Narrator addressing critic's future: "There will be one letter to the editor ..."
Events of the film: naturally, all dialogue present tense, all action "as it happens"
Screenplay: similarly, all stage direction or character description in present tense
Narrator's commentary on film / screenplay: "this scene has been considerably shortened and toned down from the original script"

And of course, there's the critic, who never speaks. That would be us, the reader(s).

It works, though Kiernan certainly keeps a lot of balls in the air. Can't imagine she stumbled across this presentation, but I'm not clear yet on what "problem" she was solving by writing the story this way. Partly I assume it's the theatricality, as noted in >5 paradoxosalpha:.

In that respect, I'm reminded of "Professor Pownall's Oversight".

I should perhaps add I’m not much of a movie-watching sort, but the more prone to the kind of historical nitpicking the story condemns.

One might consider who the narrator is. He/she/it has full knowledge of the critic’s thoughts, but no such omniscience regarding the making of the movie. Some externalized aspect of the critic’s mind?

Here's a tweak to one of the MISCELLANY entries, Kiernan's own blog: I filtered to her blog entries which were tagged "90 cats". Not much revelatory there, but I thought more relevant to this story than simply scrolling through her blog entries.

I'd forgotten she is a working paleontologist (and herpetologist) in addition to Weird author.

I'm glad Kiernan was able to collect her WFA when it was still the Wilson-designed HPL bust. "I love my Howies."

>6 elenchus: I'm not clear yet on what "problem" she was solving by writing the story this way
>7 AndreasJ: One might consider who the narrator is. / Some externalized aspect of the critic’s mind?

Kiernan's response in the Nightmare Magazine interview (under MISCELLANY again) suggests "No problem whatsoever" as answer to the first, and "Perhaps!" to the second. She's responding to a question regarding her novel Blood Oranges but addresses her approach to writing generally, at least at the time.

NM: Continuing on the thread of narrative voice, Quinn frequently comments on tropes and what writers do—a storytelling approach you’ve employed before in both novels and short stories—what are the challenges of balancing narrative pace with metafictional observations?

CRK: See, I don’t know. That is, I don’t sit down and think, “What will the challenges here be?” I write the book the way it feels natural to write the book. I don’t spend time worrying about narrative pace. The story unfolds at the pace it needs to unfold, and I don’t try to second-guess readers or cater to expectations. This is the story. This is how it’s being told. It wouldn’t be right any other way. As for metafiction, I think that’s a grossly over-used term. As with The Red Tree and The Drowning Girl: A Memoir—and almost all my other first-person narratives—I’ve written a story that consists of a story being told by a character. And when we do that, when we keep a journal, or whatever, we are aware we do so. I almost always loathe first-person narratives in which the speaker, the narrator, seems to be speaking to some unseen audience, that relies on that sort of assumption. It’s one reason I refused to write first person for the first thirteen or fourteen years of my career. I had to find a way to do it right. What feels right to me. And that led me to a sort of epistolary form, tales told via journals and the like, wherein we know who the speaker is speaking to, even if that’s just her- or himself. This adds a greater sense of realism. People complain it “pulls them out of the story,” and that baffles me. For me, it usually works the other way around. I sit there asking, “Who the hell are you talking to?” There are very skillful exceptions, of course. Moby Dick and We Have Always Lived in the Castle. But they’re rare.

I'm reminded of a history of literature type book I read once that claimed that the realization that first person narratives don't need any epistolary or other frame to justify them was one of the major advances in novel-writing. CRK evidently disagrees. (I think the book was Världens litteraturhistoria, but I'm not sure.)

For myself, the "unseen audience" is a literary conceit I've been conditioned to accept, and most of the time I don't particularly reflect on it. Adding a frame can add to the story by making it seem more "real", but frequently it distracts precisely because it forces me to reflect on the circumstances of the telling, and those circumstances seem implausible. Is writing in your journal really what you'd do in the face of imminent doom? Just how did your diary survive the shipwreck? Am I supposed to accept you remembered those conversations verbatim to write down down in a letter hours or days later?

Interesting, BTW, that she evidently has no similar issues with 2nd person narratives - the circumstances of the telling of this story could certainly be clearer!

>11 AndreasJ: the realization that first person narratives don't need any epistolary or other frame to justify them was one of the major advances in novel-writing

I've suspected that the implicit interpretive framework for such narratives is that the reader is the narrator recollecting the events described.

I don't think Kiernan has the same sort of writerly anxiety that drove 18th- and 19th-century authors into documentary conceits. In those cases, it was a matter of authentication of the source, whereas in hers it seems to be specification of the addressee.

Never thought of it that way. Perhaps not the most reassuring stance to adopt in our genre, where narrators are frequently bad people, come to bad ends, or both.

From an enjoying-literature stand-point, I'm probably best off thinking as little as possible about any implicit frame of "frameless" stories.

I read this online.

I think this story gets across, in words, the experience of watching a film more successfully than, for example, writing a full screenplay (these always favour dialogue over imagery, arguably the opposite of what good cinema should be). I recognise the attention paid to the environment, the surroundings, before the film starts, (hopefully) having your attention swept up in the film when it's playing, and so on.

The framing narrative didn't seem to be echoing or calling back to, or commenting on, the Elizabeth Bathory story. "You" simply are attentively watching so you can write your review: for the duration of the story the reader is in the reviewer's head watching the events of the film with their level of movie and historical knowledge (this I should qualify as being my view immediately after reading the story for the first time, with no time for reflection).

It's the story told by the film, then, that would be the important thing here. I've seen Hammer's Countess Dracula (actually directed by a Hungarian, Peter Sasdy) and the Bathory segment in Walerian Borowczyk's Immoral Tales and bits from those films were, inevitably I suppose, evoked from time to time. More generally, there was an air of Angela Carter (I've read The Bloody Chamber but not her essay from the same period, "The Sadeian Woman and the Ideology of Pornography" - but it seems like it would fit the themes of this story).

It's not entirely Carter-esque, in the end Kiernan writes a chillier tale, it seems to me. It's about the pointlessness of prayer and the inevitability of death - on a first, superficial reading.

I've suspected that the implicit interpretive framework for such narratives is that the reader is the narrator recollecting the events described.

Given the denouement of a fair percentage of the stories we enjoy, "we" (the reader/narrator) would have to be watching our lives flash before us at the moment of death, or reflecting on events from an afterlife of some kind!

True, but not invalidating.

The fact is, the process of reading involves mentally constructing the linear text in the reader's mind as the reader's thoughts. So there's an evoked identification with the speaker of the text. This is especially the case in the immersive experience of reading a novel.

>16 paradoxosalpha:
Oh, i agree. The exclamation mark wasn't intended to be expressing incredulity.

The narrative techniques on this one didn't bother me, and I appreciated the often precise vocabulary and its ability to transport me into the movie. >14 housefulofpaper: Yes it is a more effective recreation of a movie than a mock screenplay.

However, I admit that the story of that movie didn't do much for me. Kiernan's tales sometimes seems to me as sculpted smoke, frozen in place (aerogel, if you want a technological analogy) -- interesting but not terribly weighty or affecting. Still, the oddness induced on reading a tale is not to be denigrated, and, in that regard, this story works.