THE DEEP ONES: "Green Tea" by Joseph Sheridan Le Fanu

THE DEEP ONES: "Green Tea" by Joseph Sheridan Le Fanu 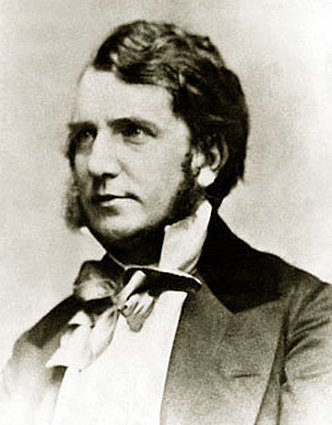 The Omnibus of Crime
Green Tea And Other Ghost Stories
Carmilla and 12 Other Classic Tales of Mystery
Green Tea: A Case Reported by Martin Hesselius, the German Physician

I'll be reading the lovely 2019 Swan River Press edition (you can see in the photo below the decorated cover under the dust jacket, and included as extras a postcard of Le Fanu and a full cast dramatisation on CD).

The book provides a little bit of bibliographical clarification on publication dates for this story. It was first serialised in Dickens' weekly magazine All the Year Round in 1869, and first book publication was in In a Glass Darkly, in 1872. 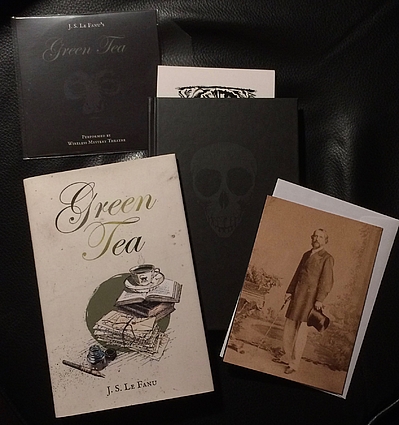 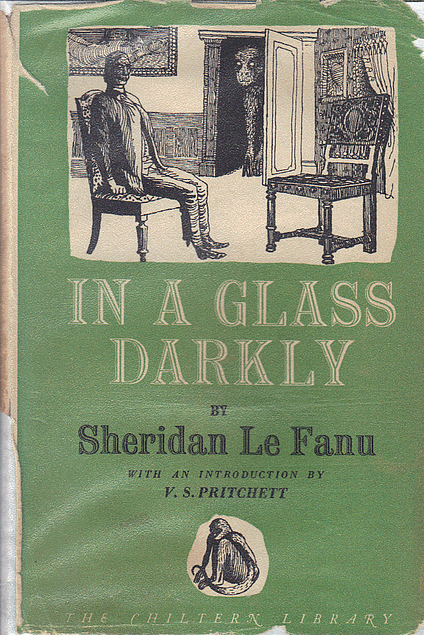 The cover is a bit tatty, but I love the illustration.

I love that illustration! At first glance it looks quite naive but it isn't, is it? It's taking account of 19th century steel engravings, and also what the surrealists did with them in the 1st half of the 20th century (I suppose I've got Max Earnst's Une Semaine de Bonté primarily in mind).

>4 housefulofpaper: The artist is Leonard Rosoman, who sounds quite a fascinating character. He was a firefighter during WW2 and did the famous painting of a wall collapsing on top of two firemen. I've just looked him up on Wikipedia. Lots of his art online too- although this gothic illustration doesn't seem to be typical of his black-and-white work.

>5 Zambaco:
Leonard Rosoman! I've got a couple of Folio Society books that he illustrated (editions of Brave New World and Brideshead Revisited) although I hadn't found gone to the trouble of finding outvery much about him. I've spent an hour or so only to remedy that.

Apparently his first commercial illustration was for the Radio Times (illustrating a Clifford Odets play) and the original b/w art can be seen on the V&A website (a scan of the original illustration I mean - although (presumably when things are back to normal) it does say one can request a viewing of the actual artwork). It's titled "The Golden Boy".

'Green Tea' is an old favourite for me. I love the atmosphere of doom and despair that Le Fanu comjures up through such devices as the glowing eyes of the monkey in the dark cab and the house full of shadows - contasted with Lady Mary's polite drawing room and Mr. Jennings' comfortable circumstances. It's a bit Lovecraftian, really, sggesting a dark reality lurking under everyday experience. The pseudoscientific explanation at the end does nothing to dispel this atmosphere.

A funny thing about Swedenborgianism is that it seems to've made more of an impact in the anglophone world than back in Sweden.

The question that remains in my mind after this read is what le Fanu expects us to make of Dr Hesselius. The outer narrator is impressed enough, but even if we accept that something Swedenborgian is going on rather than Mr Jennings suffering some less exotic kind of hallucinations, the doctor's behaviour doesn't seem too impressive here. Telling Jennings to contact him immediately should the monkey return and then making oneself unreachable doesn't sound too clever, and the final remarks seem a feeble and nitpicky self-justification.

This is becoming an old favourite for me as well. I think I've read it at least four times, in various collections and before getting the book I photographed in >2 housefulofpaper:

I was reminded, on this reading, of two stories that we've already looked at. One was "The Horla", because Jennings' plight shares many features with symptoms of mental illness, as does the narrator's situation in Maupassant's story. To the extent, in fact, that both "Green Tea" and "The Horla" have been read by some commentators as having non-supernatural explanations, but "really" being descriptions of mental collapse.

The other story was "N", only in the way that that story's conclusion suggests an interpenetration of different realities such that we do not (usually) know what or who we may be sharing the same intimate spaces, or as Arthur Machen more elegantly and more pointedly states it, "it is possible, indeed, that we three are now sitting among desolate rocks, by bitter streams. ...And with what companions?".

Le Fanu uses ideas from Emmanuel Swedenborg as the metaphysical underpinning of Jennings' haunting. Swedenborg's theology is not something I've studied directly but it keeps cropping up in my reading - William Blake was influenced by it, for example. I paid more attention to the scene before Hesselius' first seeing with Jennings, where he reads from - and quotes - the newly-acquired works of Swedenborg in Jennings' library. This sets up both the mystical or spiritual nature of the "problem" (i.e. the monkey really is spirit, an "infernal" "genie" and not a delusion) and Hesselius' intended cure which is materialistic, you might say: getting Jennings to close off the accidentally awakened senses - his third eye if you like - rather than attempt an exorcism or banishing - because a man's evil genii are always with him, it's just that usually we do not perceive them.

What to make of Hesselius' conclusion, where he denies that Jennings should be counted among his failures, as he had not begun to treat him? Fair comment or is Le Fanu lampooning the pretensions of the medical profession here (they would be a fair target, if the statistic I saw quoted once, that doctors on average only start to save more patients than they kill at the beginning of the 20th century, is true).

It's an autumnal, melancholy story. It moves with a stately pace despite the vividly-drawn horrors of the monkey's manifestations, their effect on Jennings, and his suicide. I listened to a Bruckner symphony recently (it was a cover-mount CD with a magazine; yes, that still happens!) and it seemed to share something of the same weight and seriousness.

I thought the story's construction clever. Hesselius lays out his materialistic theory at the beginning and then ends with the specifics of how it works in the case of Jennings. However, once Swedenborg is introduced, I forgot about it and hoped we really did have a demonic monkey. So, I was a bit disappointed by the story's conclusion which just holds this is yet another case of a deranged nervous system.

Initially, I did believe that Le Fanu wanted us to accept Hesselius' explanation as the truth, but, as per >8 AndreasJ:, the doctor doesn't come off very well.

Or maybe we are to see Hesselius' tact about not helping Jennings unless he asks for it as a commentary on the social mores and manners of the time. Lady Mary and Jennings arguing about drinking too much green tea may touch on this. Perhaps, we are to see black tea as socially acceptable and green tea questionable in polite society. (Pharmacologically, of course, black tea is a lot more stimulating than green tea.)

I know very little about Swedenborg. His work showed up in Ian Sinclair's Radon Daughters which I read a few months back.

Jennings' theory that paganism binds everything together in life with an "evil sympathy" was interesting though I haven't decided if it has anything to do with the story. Jennings doesn't really explain how it primed his mind to start seeing the monkey.

I don't think we're supposed to see the spiritual and materialistic theories as opposed here. Rather, acc'd Hesselius, the material change in the nervous system worked by the tea has made Jennings vulnerable to the spiritual attack of the demon.

I think the delving into paganism aspect is an instance of "the dangers of seeking forbidden knowledge".

Although it's a cliché I think that the fear of making oneself known, somehow, to hostile powers or forces is a primal one. If Le Fanu can suggest the idea in the reader's mind, it makes for a greater sense of unease, when entering into the main narrative and - as was being discussed recently - in a way living the experiences recounted, along with the characters of the story.

I think this was my first reading of this story of Le Fanu's. Following up a stray reference in the story, I learned that one of Le Fanu's most remarked stories (another which I've not read) is "A Strange Event in the Life of Schalcken the Painter", and I wonder what parallels or sympathies there may be between these two stories. In any event, the candle-lit portraits of Schalcken do resonate with the atmosphere of this story.

ETA I'd completely forgotten reading the "Schalcken" story (sadly typical of me), the dedicated thread is here.