THE DEEP ONES: "The Hand" by Guy de Maupassant

THE DEEP ONES: "The Hand" by Guy de Maupassant

"The Hand" by Guy de Maupassant

First published in the December 23rd 1883 issue of Le Gaulois. 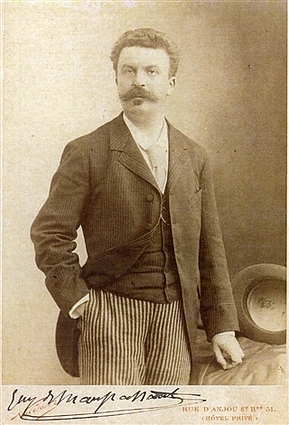 Masterpieces of Terror and the Supernatural
Twenty-Five Ghost Stories

I'll be reading this in Tales of Terror. The translation is by Arnold Kellett.

The obvious, but I think fairly uninteresting, question is whether something supernatural did happen, or the judge's guess is closer to the mark (an obvious alternative is that some third party killed Rowell, and deliberately made use of the victim's apparent superstition regarding the hand to deflect suspicion).

Thinking in terms of Kiernan's concerns about how the story is told and to whom, this one is a bit odd; how and why the judge is telling his story is clear enough, but what about the outer narrator who tells us about him?

What is it about nineteenth-century authors that they love these nested narrators? Are they meant to lend greater verisimilitude to the story or less? I can't decide, myself.

This is not nested enough. It's all about the central story which we are never told--the one Sir John never told the judge. Why did the judge turn the conversation from it when he had depicted himself as curious about Sir John and when the latter seemed quite ready to talk---almost inviting questioning? Why did GdM choose not to tell us? What do I think about this? Damned if I know, really.

I'm tempted to think it's rather annoying and not a little sadistic on GdM's part. I don't see leaving the reader hanging as a particularly endearing strategy by the writer. At the same time, he has managed to really capture the attention---the story has real power---but I have a slight feeling that he's done it by a bit of a scam.

Talking about sadistic, what are we supposed to think about the judge? His prefatory remarks on his time in Corsica are a little odd. He seems to have a disquieting relish for the vendetta cases that came before him (which makes it all the odder that he didn't further press Sir John).

Or is the focus of the story really the judge? If so, I'm failing to properly grasp it, but he is the main character in terms of holding centre stage.

One interpretation, of course, would be that the judge made up the story about Sir John to mess with the women.

Interesting that the judge uses the term "uncanny" as this story predates Freud's concept, which relates the fear of a seemingly frightening or repulsive "uncanny" thing back to an ordinary cause. I had the idea that, despite the setup for an ambulatory hand, in actuality its living owner had simply returned to reclaim rightful possession and revenge, which would be pretty mundane. The judge would seem to agree. But what about those skeletal marks on the dead man's throat? The ladies certainly seem to be stuck at the uncanny.

>8 KentonSem:
Re. the word "uncanny". This may be the (anonymous?) translator and not de Maupassant. Arnold Kellett just uses the word "supernatural" again.

Incidentally, his translation also tells us that Sir John's French is very bad: "he said"..."how fond he was of 'cette pays (this country)' and 'cette rivage' (this stretch of coast)". I admit to having to use Google Translate to see what he was doing wrong (it's his pronoun declensions).

The nesting is certainly interesting, I'm left with the overall impression that the central story --a hand is alive if not sentient, and inevitably takes its revenge on its captor-- was too simple to be told straight. De Maupassant recognised this and embroiders it with "local color" for verisimilitude, primarily achieved by the layers of incidental detail.

I took a little time attempting to track down the "mystery" that occurred in Saint-Cloud, mentioned in the opening lines, but came up with nothing specific.

I assume the trope of "evil hands" predates this story, but de Maupassant could have influenced Renard's The Hands of Orlac, which I know of from Robert Wiene's adaptation.

Acc'd the second misc. link, this is Guy's second story featuring revenge by an "evil hand".