THE DEEP ONES: "The History of the Young Man with Spectacles" by Arthur Machen

THE DEEP ONES: "The History of the Young Man with Spectacles" by Arthur Machen

"The History of the Young Man with Spectacles" by Arthur Machen

First published in The Three Imposters(1895). 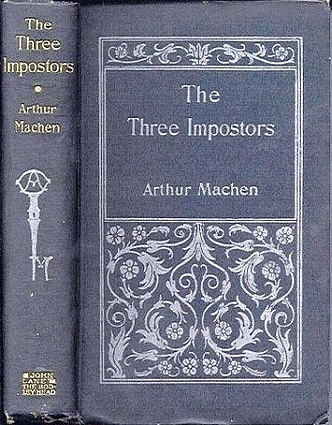 The Three Imposters
Dying of Fright: Masterpieces of the Macabre
Arthur Machen Library of Weird Fiction

I decided to reread the whole of The Three Impostors...so I'll be even later than usual.

Just finished it online. I ought, though, read the whole of The Three Impostors at some point.

I just re-read it in the Joshi Best Weird Tales of Arthur Machen Volume 1 edition.

Maybe this works better as part of The Three Impostors, but I found it pretty weak (and seemingly nonweird - is there something in the greater context to suggest Lipsius' knowledge is supernaturally derived?).

I did not find myself in much sympathy with the final remarks hoping for the protagonist's escape - seems to me he did his part to deserve an unpleasant end.

Might have liked if the pleasures offered by the cult had been expanded on a bit.

Yes, the descriptions of the interior activities of the cult were frustratingly elliptical.

I found it interesting in light of my recent read of The Secret School of Wisdom. Secret societies can inspire such dread in those who are unfamiliar with the reality of their operations, and I'm especially curious about what people imagine to be their great crimes and ineluctable influence.

I've never read The Three Imposters though I've read some of the stories. I'm going to have read it soon.

I liked it largely for three reasons.

I suspect that Walters might be sort of a satire on youthful pretensions -- maybe even Machen's.

There were a lot of occult and revolutionary societies in London at the time. (After all, Conrad's The Secret Agent is set in 1896.) I appreciated Machen using that background, again perhaps inspired by some societies he came in contact with.

I rather liked the phrasing of ". . . you are an intelligent man ... I'm sure you won't repeat the question" of Lipsius' threats.

I wonder if Machen took his name from one Justuus Lipsius, a Renaissance philosopher who sought to combine stoicism with Christianity. This Lipsius seems interested in neither.

I did wonder about Walters' curious phrase about luring people to Lupsius' house: "it is on my conscience that I have held many to the deaths of the pit." (I read the story out of Volume 1 of the Joshi edited Arthur Machen: Collection Fiction). is he talking literal death? Murders he witnessed? Or committed? Or is he referring to some sort of spiritual death?

It is sort of ironic that, at story's end, would be scholar Walters has given kind of given us a unique historical account -- one which could have used more annotating and detail of the sort he seems to object to.

In the Gutenberg edition, he says "it is on my conscience that I have led many to the depths of the pit", and I took it as meaning he'd recruited others to the cult.

My "Best Weird Fiction" edition also has "led many to the depths."

Hmm. Joshi's comment on his version of The Three Imposters is that he used the first edition of the book rather than the "very slightly revised" 1923 edition. I wonder if that line happens to be one of the slight revisions.

I read somewhere that the Young Man with Glasses is meant to represent WB Yeats who bumped heads with A. Crowley and Crowley inspired the bad guy in 3Imps? Or maybe this is all sloppy thinking.

It is tempting to think that the young man with spectacles could have been inspired by William Butler Yeats, whose joining the Hermetic Order of the Golden Dawn would here be given a sinister turn. Machen was a fellow member, having joined the G.D. in November 1899 through the Isis-Urania Temple in London, while Yeats had joined through the same venue in 1890, and was still active well into the 20th century. It seems likely that they met there, or even that Yeats had been Machen's introducer.* Yeats eventually matriculated to the highest operating grades of the order, while Machen never advanced beyond the preliminary grades.

The Three Impostors was published in 1895, prior to Machen's initiation into the G.D. Furthermore, Aleister Crowley was still in college in 1895 and didn't even know of the G.D. until 1898 when he joined. At that time, the order was kept nearly as secret as the one presented in this story. So the timeline doesn't support the notion that Yeats or Crowley could serve as models for any of Machen's characters here, or even that the secret society of the story might have been informed by Machen's G.D. experiences.

*Edited to add: According to a Leigh Blackmore article cited in Wikipedia, Machen's introducer was not Yeats, but Arthur Edward Waite.

>12 paradoxosalpha:
Thanks for that clarification!

I think I read the same allegation years ago, but I can't remember the source.

FWIW, the Gutenberg edition claims to reproduce the 1895 edition.

James Machin, in his introduction to the 2019 reprint of The Three Impostors (from its namesake small press, Three Impostors) says it was Machen himself who identified the real-life counterparts of the young man with spectacles and Dr Lipsius as W.B. Yeats and Aleister Crowley (and Miss Lally - you'll remember here from "The Novel of the Black Seal" if she doesn't appear in this story - with an actor friend named Hilda Wauton). However he goes on to note, in agreement with >12 paradoxosalpha:, that the timelines don't allow for it.

Walters makes passing reference to visiting a friend Russell (which is his undoing, since Lipsius's female tracker has taken a room in the same building), and I wondered for some reason if this could be George William Russell (aka A.E.). Nothing in my quick online search provided any confirmation, since Russell was mainly in Dublin not London, as I understand it. But interestingly, Russell and Yeats were apparently close acquaintances.

>5 AndreasJ: Maybe this works better as part of The Three Impostors ...

It very much reads as an episode in a larger tale, which I suppose it is. (I've not read The Three Impostors either.) The reference to Dyson at the end prompted me to read the story immediately before, "Strange Occurrence in Clerkenwell", which dilates a bit on who Dyson was but leaves the overall story as inscrutable as it was on its own.

I do think I'd enjoy the full book. Both stories are redolent of B movie plots and pulp stories, while predating either of them. Or put another way, it's as if I stumbled upon one of the major influences on Gary Gygax, until now known only through references in the Dungeon Master's Guide.

I was just reading in the Machen Facebook group that The Devil's Maze by A.Crowley acolyte(?) Gerald Suster is a sequel of sorts to The Three Imposters. Features Dr. Lipsius and some other Machen pastiche. Anyone read it?

Some discussion of Suster and Devil's Maze here: https://vaultofevil.proboards.com/thread/304/gerald-suster-devils-maze

Thanks for the tip! Used copies appear to be a bit dear, but I'll keep an eye out for that one in the future.

Should this and Machen's book be made into a Series of sorts? called "Dr. Lipsius"...

I just finished reading the entirety of The Three Impostors yesterday, and I will say that the story is much more effective as part of the whole. The young man with the spectacles weaves his way in and out of the novel, threading together the impostors and their weird tales, and Dyson and Phillips who are eager to hear them, and that background serves to heighten the sense of dread in the young man's own narrative. It's also the penultimate chapter, and what follows is, to me, the most horrifying scene in the book. Machen's prose in that last chapter as he describes decay and rot in the house is fantastic.

My anticipation of the full novel has risen. I plan to add an autosearch for a good used copy and see what's on offer.

I know most members aren't in the UK, so I can't be certain the link below works for everyone. i hope it does.

What's it about? Well I just found out that in June Royal Mail issued some Roman Britain-themed stamps. One of them shows the Amphitheatre at Caerleon. That is, the small town in South Wales that's the birthplace of Arthur Machen, and the ever-so-slightly fictionalised Caermaen of his stories.

Link works for me in Chicago. I found the postcards were especially good for viewing the images. That Gorgon's head is great.

>24 housefulofpaper: Thanks for this. I happen to be reading the first volume of Machen's Collected Fiction. It was nice to see the Caerleon stamp. I've been lucky enough to have been to Bath and seen the Gorgon Head in person.

And this gives me a chance to horrify those in the UK when I tell them the one in-country place I've spent the most time in is . . . . Worthing.

I've never been to Worthing but I looked on Google Streetview, and away from the seafront it looks like the residential streets of my home town of Reading, but randomly jumbled up. It has a seafront though, so immediately that makes it better than Reading.

But on top of that, it's next door to some very strange, nay legitimately Weird history, geology, and Occult goings-on:
https://www.bbc.co.uk/programmes/b06p4jvz

Hmm. I will check the link out.

Literary wise, it's where Richard Jefferies is buried and, supposedly, Oscar Wilde wrote "The Importance of Being Earnest" in the hotel where I stayed.

>10 RandyStafford:
The Three Impostors edition (2019) says its text is taken directly from the first edition and it has "led many to the depths of the pit".

I've reread the novel, but with the intentions stated here that others will be reading it for the first time, I need to keep away from spoilers.

Machen was still working through his literary influences when he wrote this. It's intentionally modelled on Robert Louis Stevenson's The Suicide Club. Machen wanted to turn modern-day London (his modern day, of course) into a fantastical Baghdad of the Arabian Nights, stories and intrigue around every corner.

What he created was a remarkably dark narrative, given the general lightness of tone of the connecting passages (it cannot be said of the individual stories embedded in the narrative as these include "The Novel of the Black Seal" and "The Novel of the White Powder").

Lipsius is indeed revealed to be more of a criminal mastermind than a supernatural menace. The story certainly works better in the context of the novel, where it provides an explanation of the novel's events (the last chapter, which is foreshadowed in the very first chapter - indeed the bulk of the tale is a flashback between the first and last chapters- provides the climax).

I don't think the young man with spectacles is being lampooned here, but Machen certainly sets up Dyson and Phillips to be very inadequate gentleman adventurers or occult detectives.

>29 housefulofpaper: Just started to read The Three Impostors today. I expect I'll like the stories in the context of the novel better.