THE DEEP ONES: "The Wandering Train" by Stefan Grabinski

THE DEEP ONES: "The Wandering Train" by Stefan Grabinski

"The Wandering Train" by Stefan Grabinski 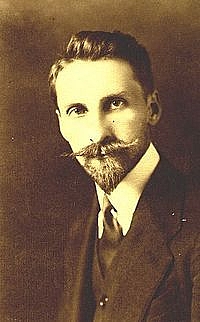 Online PDF for me.

I found this a bit unsubstantial(!) - no hint to the origin or nature of the phantom train, nor even any indication whether the people aboard the passed-through train recovered from their "insanity" at the sound of the signals, or ever.

Unlike some books I've read recently, the translation seemed quite good. Hadn't I known otherwise I don't think I'd suspected this wasn't written in English originally.

Definitely a story that doesn't attempt to do too much: lots of practical questions, as it were, following the very little action that occurs, but which Grabinski seems quite content to leave to the side. Much is made in what commentary I've found of Grabinski's general interest in a modern Zeitgeist and the inspiration therein for his horror. I wonder how much the effect of such stories as "The Wandering Train" is to be found in reading the full book, or having in mind a clear sensibility similar to Grabinski's own before reading the story.

That said, Grabinski chose to present the story as he did and readers are free to judge it that way! I am left with a sense of wanting more, but it's not a disappointment so much as a glimpse of something I don't get in other stories. In that way (but with a much different tone), similar to what Dunsany does for me with his slighter tales.

Grabinski does a fine job setting the stage despite the ephemeral nature of the menace. As noted already, the translation is a major factor in this achievement.

If the problem had concerned a so-called “accident,” which, admittedly, one could not foresee but for which an explanation could be provided afterwards, then they, the {railway} professionals, were vulnerable but certainly not desperate. But something totally different was at issue here.

Something incalculable like a chimera, capricious like madness had arrived, and it shattered with one blow the traditional arrangement of things.

Therefore, they were ashamed of themselves and humiliated before the public.

At present it was most important that the problem should not spread, that “the general public” should not find out anything about it. It was appropriate to conceal any countermeasures, so that this strange affair would not come to light in the newspapers and create a public uproar.

Thus far the matter had been miraculously confined to the circle of railwaymen connected with it. A truly amazing solidarity united these people: they were silent. They communicated with each other by telling glances, specific gestures, and a play on well-chosen words. Thus far the public did not know anything about any problem.

Yet the restlessness of the railway employees and the nervousness of the officials had been gradually transmitted, creating a receptive soil for the sowing of secret conspiracies.

I note the word choice, in keeping with Grabinski's alleged concern with modernity: "traditional arrangement of things". The menace is a threat to a commonplace world, coming from outside, somehow.

I've read this story before. I managed to find the box containing my copy of The Dark Domain. As so often when I do these Deep Ones readings though, I couldn't remember the details when reread it this week.

Even though it's quite a short story, I didn't manage to read it all in one sitting. That did mean that I had a few hours of being mildly irritated at Grabinski for focusing on the mental upset of the railway workers and ignoring the danger of collision that a rogue locomotive would actually represent. Of course the second half of the story does focus on just that, but with the twist that the wandering train is some kind of occult visitation.

From what I can remember of reading all th stories collected in The Dark Domain, Grabinski's stories tend to either introduce the occult or the supernatural into the modern world, or pursue a psychosexual path - obsession, a voyeuristic confusion of identities, that ind of thing. It does come across as what you'd expect - what you've been led to expect - from the literature of Central Europe of that period, without being able to point to other creators, in any medium, that Grabinski's work particularly resembles. And he can't have had a big influence if, as his Wikipedia entry says, he was almost forgotten under after World War II. Maybe it's just a superficial set of resemblance that greater knowledge of the writers and film makers of the period would dispel.

>6 housefulofpaper: ... ignoring the danger of collision that a rogue locomotive would actually represent.

But he doesn't make this point very forcefully, if indeed it's a point he wishes to make. Again I'm not disappointed, because somehow I find the unease more suitable than the histrionics.

>7 elenchus:
I wondered if a swipe at a moribund bureaucracy was intended, but didn't pursue the line of thought very far. I chickened out of looking into which Great Power had taking over the chunk of Poland Grabinski was born into, and how well or how badly they were viewed to be running things.

Anyway, it wouldn't be fair to compare running a ralilway network to a pointless paper-shuffling exercise. If rail workers don't do their jobs it ends in disaster. So if that was in Grabinski's thoughts, Im afraid it would be a point again him, to my mind.

But I suppose I could be missing the point and the very fact of constructing a world that requires mass transportation systems running like clockwork and the masses of people reporting in every day, to use them, is the thing being obliquely critiqued. Blake's "mind-forged manacles".

In 1919 when the story was written, Poland was newly independent. Until WWI, Grabiński lived under Austrian rule, which was resented by nationalists but not, AFAIK, particularly repressive. Certainly it hadn't provoked the sort of violent opposition in the previous century as Russian rule had in other parts of Poland.

The area has been part of Ukraine since WWII, and even in Grabiński's day much of the population would have been Ukrainian-speaking rather than Polish.

I did wonder if there was some sort of message about the dangers about relying too heavily on time-tables and rational planning - but given the behaviour of the phantom train, it's hard to see it'd been less troublesome in a more chaotic railway system. Rather, I think we're dealing with the modern fear of progress breaking down, of being thrown back to chaos.

I've been reflecting on this aspect of what I see as the central point of Grabinski's tale, and perhaps of his supernatural work generally. I still don't have a strong or specific insight into Grabinski's concerns, but it occurs to me my initial presentation might be misconstrued as referring to an anti-modern outlook, the resistance of people uncertain or unwelcoming of change. I don't think that's Grabinski's story, such a story wouldn't need a supernatural element. Grabinski isn't a Kafka, focusing on alienation of urban development or rational techniques. (I hasten to add, I think Kafka is more than that, too, but I've seen such an outlook typically characterises the reaction or interpretation of Kafka's stories.)

The rational planning of modernity is important but I feel with Grabinski it accompanies the menace, or helps facilitate it, more than serving as the core threat itself. But as noted before, I don't yet have a clear understanding of what it is. The reference to Blake, though, is consonant with my impressions. Blake wasn't against rational planning itself, so much as against making it the predominant or eclipsing outlook of man. Overemphasizing rational thinking (Urizen) led to horrors separate from reason itself.

Though I found the ending a bit of a let-down, I still liked this one.

I think others' view that we may be looking at a critique of rational planning above all else to be interesting.

On reading the story, my thoughts were this.

Lipinski, in his introduction to The Dark Domain, suggest this is another of Grabinski’s stories about Henri Bergson’s “élan vital – that spiritual force, or energy, that underlies reality and influences matter.”

That’s certainly a possible reading for what the train represents. It is a force that cannot be contained or calculated in the confines of the complex railroad system. It exists outside it. It’s not the remnant of some earthly invention or a leftover human soul. Taking the form of man’s then most complicated invention, entering into his most complicated transportation network, hints that it is the same force that animated man to invent those things.

But I wonder if there isn’t another allegory at work, a political one.

This story would have appeared after the cataclysm of World War One.

Like the war bursting in on the well-ordered world of the Belle Epoch, the ghost train disrupts the railroad of this story. Grabinski may have been thinking along the lines of A.J.P. Taylor who maintained that railroad timetables dictated the mobilization, especially Germany’s, that led to war. (Taylor published his theory in 1969.)

The allegory theory breaks down, though, in that the ghost train doesn’t kill or injure anyone. Its devastation is not akin to war.

On the other hand, World War One for Grabinksi’s native Poland was not an unmitigated disaster. It led to its renewed independence, and, perhaps, that explains the last line of the story. The railroad is running again. The system, the entity of a self-governing Poland is operating again too.

As the shock of the ghost train passing through them disturbs, temporarily, the passengers, the war disturbed Poland, but it also relieved them of foreign occupation. (But what are we to make of the idea of insanity if Grabinski’s is presenting this political allegory?)