THE DEEP ONES: "The White Ship" by H.P. Lovecraft

THE DEEP ONES: "The White Ship" by H.P. Lovecraft

"The White Ship" by H.P. Lovecraft 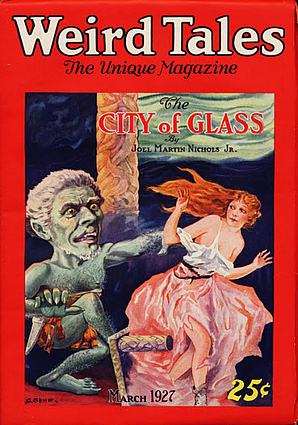 Dagon and Other Macabre Tales
The Dream-Quest of Unknown Kadath
H.P. Lovecraft The Complete Fiction

I'm happy to read from my copy of Dagon and Other Macabre Tales.

Another one I 'd read before fifteen years ago or so. This was one of the ones that'd stuck in my memory reasonably well, so there was little surprise here. Not that it can have been too much surprise first time round either - it can hardly surprise any reader that sailing for Cathuria would turn out to be a bad idea.

Something I had forgotten was the protagonist's name; if you'd asked me last week, I could have told you it was a Lovecraft character, but not that he was from this particular story.

The memorious will note that the geography here was incorporated into DQoUK - Randolph Carter is taken to the Moon via the same cataract that proves Elton's undoing here. So from a systematizer's perspective this is a Dreamlands story - and Elton's journey is in any case clearly not one through conventional time and space. The dead bird and the spar serve as a fantasy keepsake (to use TVTrope's term), which trope we discussed recently in the context of "The Mummy's Foot".

This was my first reading, and I found it propitious that we'd recently visited Dunsany's "Poltarnees" as this was so clearly one of HPL's Dunsanian pastiches. I still find it impressive that HPL found his own authorial voice, so distinct from this one.

>4 AndreasJ:
I'd not recalled the cataract from DQoUK, and appreciate you pointing it out!

The story for me was satisfying as a fan of Lovecraftian world-building, but not one that would have left an impression were it my first taste of his fiction. I suspect I'd get more out of it were I to read the various Dreamlands tales in one go, though. Like our recent Machen, the stories probably build on one another in a way that reading any of them in isolation simply doesn't capture.

I don't know if they do really - the stories were written independently, and then retroactively incorporated in the Dreamlands by DQoUK. While this one clearly involves a visionary journey, others, like "The Cats of Ulthar" and "The Doom that Came to Sarnath", have nothing in them to suggest they're set in a dreamland rather than the ancient past or a parallel world.

Not great, but interesting.

Every time I've read this, two things have puzzled me:

First, perhaps a tangential point, why are there fewer and fewer ships passing the lighthouse? Is it a reference to the state of shipping off New England during Lovecraft's day or does he intend us to read something symbolic into it?

Second, is there a deeper meaning to be found here? On reading the descriptions of the lands he visits or passes one can't help but think it's an allegory. But whenever I try to give some thought to the idea it keeps slipping through my fingers. Trying to shape Elton's journey and ultimate failure into some sort of lesson or moral doesn't really work. Did Lovecraft simply intend it as pure fantasy?
Because of this second puzzle it has never been a favourite for me, despite the fact that it has stayed in my mind since first reading. I just find it 'unsatisfactory', either as allegory or pure fantasy.

I suppose you could suggest the 'moral' that striving towards some goal means sacrificing your ability to fantasise and daydream. But that doesn't get me anywhere as I don't really know what to make of the idea that Lovecraft intended that. In any case, I instinctively disbelieve it.

Edit: I meant that I instinctively disbelieved that Lovecraft intended that.

I've taken it as a warning about losing what you have in the pursuit of the unattainable.

I wondered if John Masefield's poem "Cargoes" might have been an inspiration for this story. It's in three stanzas each one describing a different vessel. The first two a romantic, exotic conjurations of the past, the final stanza brings the reader down to Earth with a thump, a "Dirty British coaster with a salt-caked smokestack" being the subject.

As well as breaking the Romantic spell between stanzas two and three, the poem maybe also supplies a real-world reason for the loneliness of the lighthouse at the start of Lovecraft's tale. Steam ships wouldn't have to follow the prevailing winds or currents the way sailing ships do, I presume.And it would follow that there'd be a reduction in ships passing the lighthouse.

Knowing Lovecraft's work and his biography, I know that the pull of exotic lands, "what's over the horizon", was countered (and eventually more than countered) by his love of home, and more specifically of his childhood home and indeed his early childhood, "The Land of Lost Content", to quote another English poet. It's why "The Silver Key" has such power (for me at any rate) and I wish Lovecraft hadn't permitted himself to co-author a sequel.

I don't know how much of himself he put into this one, whether it has a moral or consciously-arrived at position or if it just aims for pathos in a way, and I don't mean this disparagingly, that schoolboy poetry, or songwriting of the (say) '60s to the '80s (when the artist/band were, post Bob Dylan, expected to do the job themselves) does - which neatly links in with H P Lovecraft, the band. I have to confess that I'd expected that song to be included in the miscellany, having had it or them tun up in internet searches many times.

The term fantasy keepsake is a useful one but I'm surprised the TVTropes site doesn't include '70's children's animation Mr Benn.

>10 AndreasJ: - I've taken it as a warning about losing what you have in the pursuit of the unattainable.

Well, that is probably my instinctive reaction to the tale, but it never sticks for me when I think it over. He sets off for Cathuria from what seems, in effect, the island of the lotus-eaters, which rather undermines things.

I might say that was his intention but he failed to do a very good job of it, but I don't know if I really believe that.

Somebody above mentions Clark Ashton Smith's influence on this tale---oops, thought it was here; I see it wasn't; can't remember where I saw that---but I think the influence can be seen.* Anyway, the thought has entered my mind that L decided he wanted to write a CAS-type fantasy and simply sat down and did it 'stream of consciousness' style with little thought to message or, even, plot. Whether he actually did things like that I don't know enough about his methods to say (still haven't got round to reading a good book about him).

I did say in >8 alaudacorax: that this tale has always been a puzzle to me ...

Edit - * Or perhaps I'd been thinking of >5 elenchus:'s Dunsany.

Yes, I suppose Lovecraft might have been alluding to general perceptions of change in local coastal shipping and replacement of the romanticism of the sailing ship with modernistic steam with no intention other than scene- and mood-setting.

Your third paragraph has me wondering if, perhaps, 'The Land of Lost Content' isn't what L was getting at, here. An allegory of growing up, perhaps, and not seeing that as an unmitigated good. I think I could buy that, though I'm not 100% on it.

Or, perhaps, what we have here is Lovecraft's well-known nostalgia for the past. Elton is the 3rd generation in his job---a relic of an earlier, more romantic time of sailing ships---he really having no control over his actions, being carried along in the inexorable grip of time, symbolised by the 'bird of heaven', into a much less attractive future, and very much being a symbol himself---probably of Lovecraft.

Don't know if I believe that, either ...

In 1919, CAS had published very little prose, and none in the Weird mode we know and love, so if there's any influence from him here it must be from his poetry.

Elton loses not only Sona-Nyl but the communion with the sea he had before stepping aboard the ship, so perhaps his mistake was following the bird at all. This sits uneasily with the old man's warnings about Cathuria specifically, I grant.

Yes---got my authors and dates wrong. There's an opening for a red-faced emoji, here.

Just read 'The Silver Key'. It's odd: I remembered it when reading and it was a pleasure to revisit it, and I much prefer it to this one---much more Lovecraftian---and yet it's 'The White Ship' that has been more prominent in my memory down the years. Perhaps just because it's always been a bit unsatisfactory to me?

Edit - Also oddly, I find myself quite happy to take 'The Silver Key' on its surface terms; I don't have to look for allegory in it---'The White Ship' seems to demand that of me.